Refiners and chemical companies restart production, help employees get back on their feet 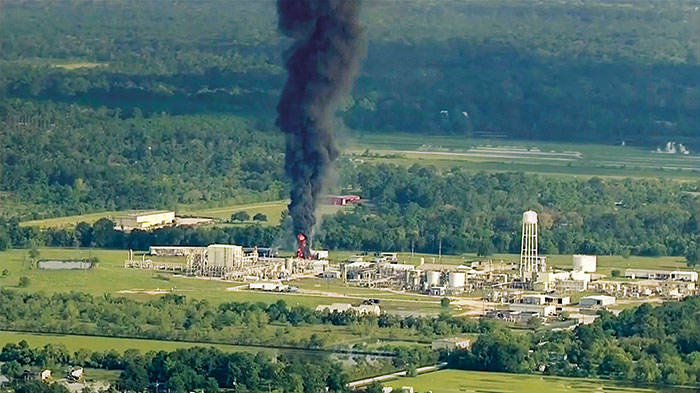 The tower of smoke billowing from Arkema’s plastics additives facility in Crosby, Texas, may stand as the enduring image of how the chemical industry weathered Tropical Storm Harvey. But in contrast to the fire and explosions at the Crosby site, the larger Houston-area industry is reporting little significant damage and swift progress on overcoming logistical jams and getting back to work.

Residents living near the flooded Arkema plant were allowed to return to their homes early on Monday Sept. 4, a day after federal, state, and local safety officials coordinated with the company to ignite containers of organic peroxides at the site that were at risk of exploding.

Evacuation orders were first issued by local officials on Tuesday, Aug. 29, in response to danger posed by the organic peroxides after Harvey flooded the plant with close to 2 meters of water. 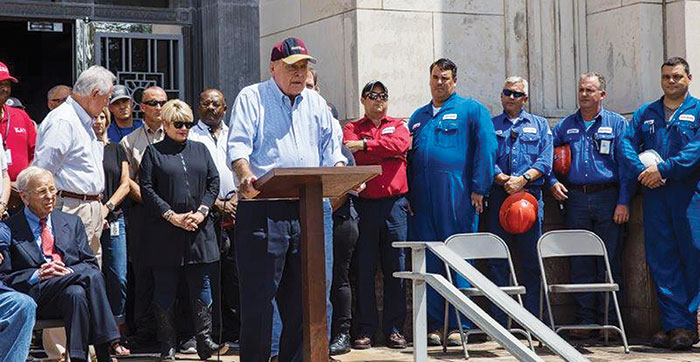 Credit: Huntsman Corp.
Jon Huntsman Sr., executive chairman speaks to a gathering in Beaumont, Texas after Tropical Storm Harvey. He announced a $3 million donation from Huntsman Corp., the Huntsman Family Foundation, and Huntsman board member Wayne Reaud to assist with recovery from Hurricane Harvey. The donation is part of more than $10 million donated by Huntsman-related parties.

The facility, 43 km northeast of Houston, lost primary and backup power systems used to keep the peroxides cool. As the chemicals warmed up they began to degrade. Three trailers of stored chemicals exploded on Aug. 31 and Sept. 1, and six remaining ones were expected to blow up as well.

Arkema did not specify exactly how officials ignited the six containers, but after being ignited, they burned themselves out.

Later on Sept. 4, Rich Rowe, the CEO of Arkema’s North America operations, apologized to the facility’s residential neighbors. “I hope that they can know how profoundly sorry we are for the impact we had on their lives. And how committed we are to working with them to bring their lives back to normal,” Rowe said at a press conference.

Residents were not given advance warning that the six trailers would be purposely set on fire. But Rich Rennard, Arkema Americas head of acrylic monomers, said aerial surveillance showed that peroxides were leaking from the containers. “At that point we made the decision that, in order to maintain the safety and security of the site and the area for the residents, a more aggressive approach was necessary.”

In Houston, meanwhile, refineries are bouncing back from Harvey quickly, according to the consulting firm IHS Markit. Just after the hurricane, 25% of U.S. refining capacity was shut down. By Sept. 4, that number had declined to 19%, and with nearly all the 20 affected refineries restarting, IHS forecasts the number to fall below 10% by Sept. 8.

ExxonMobil is restarting its Baytown refinery, the second largest in the U.S., and assessing its chemical complex in Beaumont. The company is importing personnel from facilities in Baton Rouge, La.; Billings, Mont.; and Joliet, Ill., to help the Houston-area facilities restart.

Getting chemical production back on-line is proving to be a knottier problem. Companies first worked to locate their employees, who may not have been able to stay in their homes, and then to ensure that facilities were safe to enter. At Huntsman Corp., 100 of the firm’s 1,000 area workers have homes that were severely damaged by the storm. The company says it is offering compensation, hotel rooms, and vehicles to employees who have been displaced.

Huntsman reopened its Houston-area headquarters on Sept. 4 and has resumed operations at manufacturing sites in Houston and Freeport, Texas. It is completing damage assessments and preparing to restart operations in Chocolate Bayou, Conroe, Dayton, and Port Neches, Texas.

IHS estimates that Harvey knocked 54% of U.S. ethylene production and 36% of ethylene consumption off-line. Now, as they recommence production, chemical producers must contend with constraints on moving materials in and out of plants. “It may take weeks for the overall ethylene market to approach prehurricane production levels,” the consulting group says.

At BASF, transportation has been a rate-limiting factor as it restores operations at its large sites in Port Arthur and Freeport. “Given the widespread flooding, inbound and outbound logistics are expected to be challenging for our sites in Texas,” the company says.

The industry caught a break on the Houston Ship Channel. Port Houston resumed operations on Sept. 1, reporting that it had experienced no flooding or damage to its big container terminals. However, navigational hazards such as strong currents are preventing the largest ships from using the port.

BNSF Railway says it is restoring rail service, particularly to the north and west of the city. However, the company is still reporting flood-related outages toward the east of the city, where the hurricane’s impact was felt more strongly.

Trucks must contend with both damage to highway infrastructure and diversion of vehicles toward relief efforts around the region. IHS forecasts that transportation disruptions will linger for months.

Houston-area residents will soon get more information from the U.S. Environmental Protection Agency and the Texas Commission on Environmental Quality about the pollution impact of Tropical Storm Harvey. The agencies report that most air quality monitors are back on-line and that all measured concentrations are “well below levels of health concern.”

EPA and TCEQ have teams in place to investigate possible damage to 11 Superfund sites and will enter them as soon as flood waters recede, according to a statement. Meanwhile, the agencies are monitoring drinking and wastewater and helping water system operators return to operational status.

Comments
KELLEY ST CHARLES (September 12, 2017 6:52 PM)
Saturday 9/9, I drove down S. Battleground Rd/ Independence Blvd (Houston/ La Porte) going through the string of refineries and chemical plants (Solvay, GE Specialty chemicals, BP, etc) and it looked like Open for Business even though on sea level. Does a chemist proud to drive through our life blood on the way to the superb seafood at the Monument Inn Restaurant (also open for business) and see tankers coming in empty to load up so soon after Harvey.
Reply »