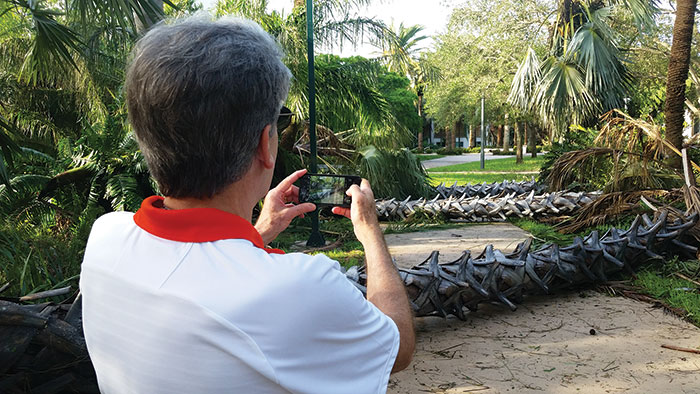 Ahead of the storm, schools canceled classes and closed campuses. Chemistry departments prepared for power fluctuations and water leaks by shutting down instruments and covering them with tarps. Where possible, generators helped keep refrigerators and freezers cold—at least for as long as fuel lasted.

The University of Puerto Rico’s Río Piedras campus suffered no structural damage, just fallen trees and power loss for several days, reports chemistry department chair Néstor Carballeira. Classes resumed there on Sept. 13. Still, many parts of Puerto Rico remained without electricity as the territory served as a relief site for refugees from elsewhere in the region.

At the University of Miami, “several major campus buildings, including many of the residential colleges, remain without power or air conditioning,” the school said on its website as of C&EN press time. It planned to have faculty and staff return to work on its main Coral Gables campus on Sept. 20, reopen residences on Sept. 22, and resume most classes on Sept. 25. “The university will release a revised academic calendar that ensures completion of the full academic semester,” it said.

When contacted by C&EN, chemistry department chair Roger M. LeBlanc had not yet been able to check his department’s buildings personally, but a colleague reported that all was well.

LeBlanc lives on Key Biscayne and says that water rose more than a meter in his condo complex, but it was built after Hurricane Andrew in 1992 and designed to accommodate such flooding. He lost power from Sept. 8 to 13. He had printed manuscripts and correspondence needing attention prior to the storm and caught up on those by sunlight after it cleared, he says.

Florida International University, also located in Miami, reopened to faculty and staff on Sept. 14, although classes were canceled indefinitely, the university said on its website.

Further north, University of South Florida campuses in Tampa and St. Petersburg resumed classes on Sept. 14, as did the University of Florida in Gainesville.

University of Florida chemistry facilities also emerged from Irma relatively unscathed, aside from some roof leaks, says department chair Lisa McElwee-White. When researchers returned to their labs on Sept. 12, “the graduate students asked if they could run experiments,” McElwee-White says. “I told them that they had to make sure their hoods were running properly.”

Unlike the Houston area, Florida has few chemical industry facilities aside from phosphorus mining in the central part of the state. “Damage at our facilities appears to be limited,” mining firm Mosaic said in a Sept. 11 statement, but the company did not give a date for when it expected to resume normal production.

Education
UNC Wilmington chemists relocate in wake of Hurricane Florence
Education
North Carolina colleges deal with the aftermath of Hurricane Florence
Share X
To send an e-mail to multiple recipients, separate e-mail addresses with a comma, semicolon, or both.
Title: Hurricane Irma upends university operations
Author: Jyllian Kemsley
Chemical & Engineering News will not share your email address with any other person or company.