Machine ‘arm’ swivels back and forth to add pieces stereoselectively

Structures of the four classes of asymmetric products the machine makes.

Molecular machines, large molecules with moving parts that can carry out various useful tasks, were honored last year with the Nobel Prize in Chemistry. Researchers would like these tiny machines to someday synthesize other molecules, similar to the way ribosomes make proteins. Potential advantages of using molecular machines as synthesizers are that they might work more efficiently than conventional, stepwise solution-based syntheses in the lab or that they might create products not easily accessible with current methods.

David A. Leigh of the University of Manchester and coworkers made molecular-machine-based chemical synthesis a reality four years ago when they developed a large molecule that picks up amino acids and assembles them into tripeptides (Science 2013, DOI: 10.1126/science.1229753). Now, they’ve taken the concept to another level by creating a programmable molecular machine that creates four different products by adding thiol and alkene substituents asymmetrically to an α,β-unsaturated aldehyde substrate (Nature2017, DOI: 10.1038/nature23677). The machine makes each of the products with stereoselectivity similar to, but in some cases lower than, that of corresponding catalytic reactions in solution, Leigh says. 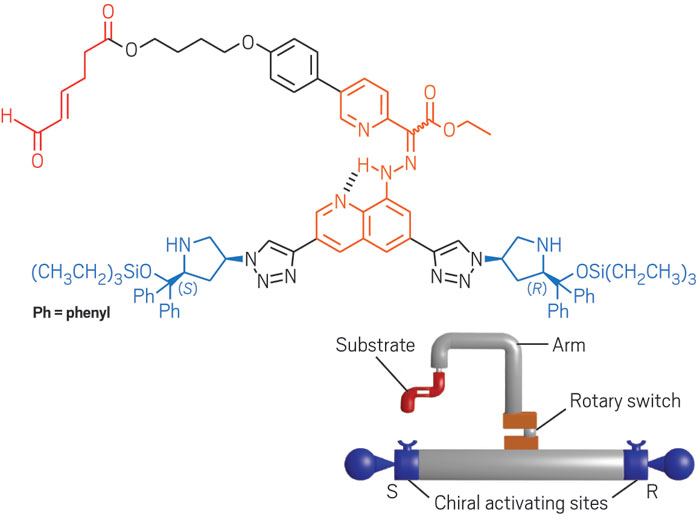 To generate the products, Leigh and coworkers attach an α,β-unsaturated aldehyde substrate to an “arm” in the molecular machine. An acyl hydrazone located in the center of the machine changes conformation in response to pH changes, causing the arm to rotate between two fixed orientations. Rotations position the substrate above one or another of two silyl prolinol activation sites in the machine that mediate reactions with opposite chirality—R for one site, S for the other. So arm position controls reaction chirality.

The substrate forms a reactive iminium intermediate with an activation site, and the intermediate then reacts with a thiol for the first addition. Then the substrate, with its added sulfide, forms a reactive enamine with an activation site, and the alkene adds to that. If the arm is rotated between the two activation sites mid-synthesis by adding acid, the steps have opposite chirality, and the diastereomer products have (R,S) or (S,R) configuration. If the arm is stationary between steps, both additions occur with the same chirality, and the product has (R,R) or (S,S) configuration.

Marc L. Snapper of Boston College tells C&EN that the molecular nature of Leigh’s machine makes it reminiscent of biological molecular assemblers such as nonribosomal peptide synthetases, which microorganisms use to create peptide natural products and which scientists can engineer to make customized analogs. Snapper and Boston College’s T. Ross Kelly also write in a Nature commentary associated with the new report that molecular machines “offer an alternative strategy” to other automated synthesis techniques, like the reactor system Martin D. Burke and coworkers at the University of Illinois, Urbana-Champaign, designed to make organic small molecules (Science 2015, DOI: 10.1126/science.aaa5414 and C&EN, March 16, 2015, page 3). But it is too early to tell whether molecular machines “will offer advantages” over these techniques, they note.

Molecular-machine synthesizers “might indeed never find favor,” and the new system may be “more contrived than ingenious,” Kelly and Snapper say in their commentary. They point out, however, that “those who dismiss the concept of molecular assemblers should heed the lesson of Lord Kelvin’s infamous 1895 pronouncement that ‘heavier-than-air flying machines are impossible.’ We look forward to seeing what other impossibilities take flight in the future.”

CORRECTION: This story was updated on Sep. 21, 2017, to correct the structure of the molecular machine’s substrate.

Catalysis
Mechanical chirality gives new shape to catalysis
Catalysis
Catalyst chirality switched with a flash of light
Biological Chemistry
Ribozyme May Hint At The Origin Of Life
Share X
To send an e-mail to multiple recipients, separate e-mail addresses with a comma, semicolon, or both.
Title: Molecular machine builds set of chiral molecules
Author: Stu Borman
Chemical & Engineering News will not share your email address with any other person or company.

Comments
Abhishek Ghosh (September 21, 2017 11:17 AM)
For molecular machines to be favoured over other methods, they have to have a competitive yield and reaction rate. This article goes into fair detail of how the machine works but it jumps into comparisons without giving any data on reaction specifics.
Reply »

Gary Camp (September 21, 2017 1:30 PM)
A very good place to start real production would be Carbon Nano Tube (CNT) bundles that continuously produce a "thread" that would be pulled out of the "factory" soup and spooled. CNT's are the strongest threads in the world. They would make major changes in manufacturing, materials and possibly make the Space Elevator real. This would not require a complex "robot" to build because it is single molecule, repetitive, and simple (relatively). Perhaps using a spiral walking machine.

I have wondered why a chemical thread factory has not been built for at least 15 years as it is such a simple concept.
Reply »

Tim (September 28, 2017 12:19 PM)
Applications could include more orderly workings of electronic devices, which could make them much smaller and efficient. This technology could greatly improve batteries in electronic cars.
Reply »