Integration is the goal for acquisitive drug service firms

Four companies lay out plans for their chemistry-focused acquisitions 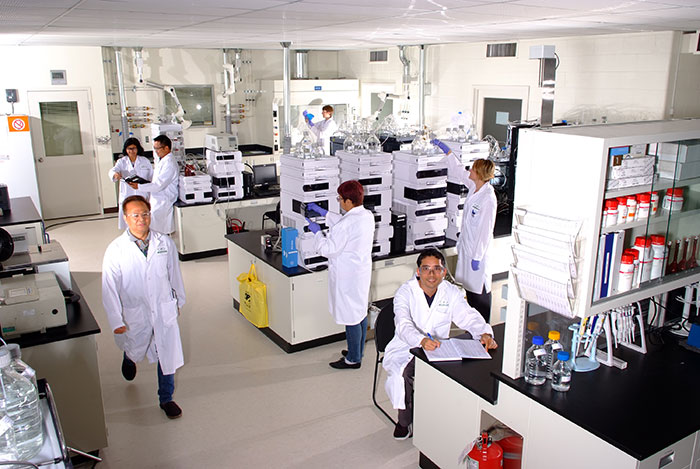 Credit: Alphora Research
With backing from its new owner, Alphora plans to expand its Ontario facility.

Over the past year, overseas companies have snapped up several independent North American contract development and manufacturing organizations (CDMOs) that make small-molecule drug active ingredients. In each case, the goal of buying the CDMO was to capture its U.S. drug industry clients and integrate them into global networks of labs and manufacturing facilities.

It’s too early to tell if the plans will pan out. But at last month’s ChemOutsourcing conference in Long Branch, N.J., managers at several of the firms involved sat down with C&EN to discuss strategies behind the acquisitions and what has transpired so far.

At the meeting, Ramesh Subramanian, Piramal’s vice president of strategic marketing, explained that the purchase capped a program to fill two gaps in Piramal’s lineup of services for pharmaceutical customers: injectable drugs and high-potency APIs for cancer treatments.

“Ash Stevens is now at the heart of our oncology strategy,” Subramanian said. For example, raw materials needed by Ash Stevens can come from Piramal’s plant in Ennore, India. APIs made by Ash Stevens can be turned into finished products in Lexington. Or they can be sent to Grangemouth, Scotland, to be conjugated with antibodies and then sent to Coldstream for finishing.

Piramal is investing in both businesses, Subramanian said. Coldstream is getting $35 million to triple drug finishing capacity and boost lyophilization capability. Ash Stevens will receive up to $10 million to update analytical labs and add capacity to manufacture ultra-high-potency APIs.

Another deal was the $25 million purchase of J-Star Research, a New Jersey-based CDMO, by the Chinese pharmaceutical intermediates manufacturer Porton Fine Chemicals. Andrew Thompson, who was J-Star’s president when the deal was announced in January and continues in that role, said the integration is going well so far.

At the time of the acquisition, Porton had just set up a process R&D facility in Cranbury, N.J., about 45 minutes south of J-Star’s South Plainfield labs. J-Star, meanwhile, was bursting at the seams at its space-constrained site.

Since then, Thompson said, a number of J-Star staffers have moved to the Porton facility. Duties have been divided so that South Plainfield handles synthesis under the U.S. Food & Drug Administration’s current Good Manufacturing Practice (cGMP) standards. Cranbury is managing for-fee research and developing high-potency API capabilities.

A dozen times already, Thompson said, Porton has supplied regulated starting materials that J-Star otherwise would have had to buy on the open market. Porton is already planning two more cGMP sites in South Plainfield, he added, and has a longer-term goal of acquiring a European API facility with larger reactors.

In June, the Italian API maker Olon acquired the chemical division of Ricerca Biosciences, an Ohio-based R&D services firm. Luigi Trussardo, an Olon vice president, told C&EN that he is preparing to move to the U.S. to head what is now called Olon Ricerca Bioscience.

The reason for the purchase was simple, Trussardo said: Olon sees Ricerca as the source of more business in the U.S.

Ricerca has annual sales of about $20 million, mostly of APIs for customer drugs in Phases I and II of clinical development. At its eight European sites, the much larger Olon can take Ricerca-made compounds into Phase III and, if they are successful, to commercial launch.

Trussardo expects Ricerca will now attract customers who were concerned about starting an API project at the Ohio facility and having to transfer intellectual property to another company if larger quantities were needed. “Now there is no issue with confidentiality,” he said.

To better integrate the U.S. and European operations, Olon is arranging for European R&D chemists and quality-control experts to visit the Ohio facilities. And Trussardo said his team has already identified U.S. projects with the potential to move to Europe.

Just four days after Olon revealed its purchase of the Ricerca business, Eurofins Scientific, a European analytical testing firm, announced the acquisition of Alphora Research, a small-molecule CDMO based in Mississauga, Ontario. A month later, in July, Eurofins agreed to acquire Advinus, an Indian CDMO.

It’s a bolder move, Mahal acknowledged, but Eurofins has a track record of acquiring companies—more than 25 this year alone, mostly in analytical testing and clinical diagnostics—and integrating them. Already Eurofins has agreed to fund the addition of a third plant at the Mississauga site, he pointed out. “It will be easier than going to the bank,” Mahal said about the corporate backing.

Mahal also sees opportunities for Alphora to source raw materials from Advinus and possibly draw on Eurofins’s analytical testing services. Although the ink has barely dried on the deal, Mahal is optimistic. “I am excited by the corporate support we are getting,” he said.

Outsourcing
Dipharma places a kilo lab in Kalamazoo
Outsourcing
Cambrex to acquire dosage-form drug contractor Halo
Mergers & Acquisitions
Drug service provider Alcami to go to another private equity firm
Share X
To send an e-mail to multiple recipients, separate e-mail addresses with a comma, semicolon, or both.
Title: Integration is the goal for acquisitive drug service firms
Author: Michael McCoy
Chemical & Engineering News will not share your email address with any other person or company.