Civil suit filed against University of Hawaii for lab explosion 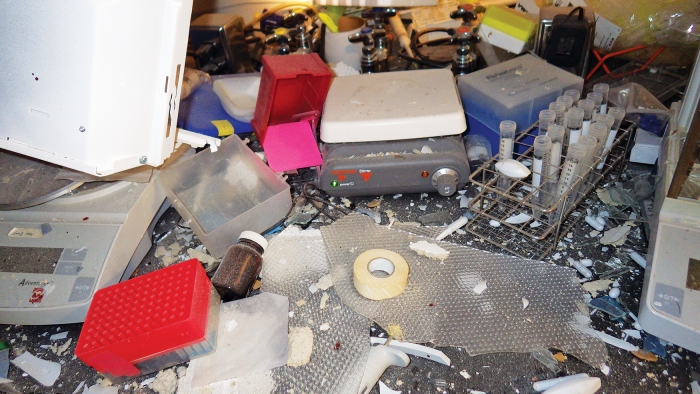 An injured postdoctoral researcher and her spouse have filed a civil suit against the University of Hawaii (UH) and others involved for a 2016 explosion in which the researcher lost one of her arms.

At the time of the incident, postdoc Thea Ekins-Coward was preparing a gas mixture of 55% hydrogen, 38% oxygen, and 7% carbon dioxide to feed to bacteria to produce biofuels, according to a report issued by the University of California Center for Laboratory Safety (UCCLS). The center was hired by UH to investigate the incident.

The gases were combined in an ungrounded 49-L steel tank designed for compressed air, not for hazardous gases. UCCLS concluded that a static discharge most likely caused the explosion.

Ekins-Coward lost her right lower arm and elbow and suffered corneal abrasions, facial burns, and loss of high frequency hearing from nerve damage to her ears, according to a civil complaint filed with a Hawaii court on Jan. 9.

The complaint does not specify the amount of compensation that Ekins-Coward and her spouse are seeking.

Comments
Isaac (January 19, 2017 2:55 PM)
Mixing explosive gases in an ungrounded steel tank; these administrators should be ashamed. Unfortunately, as researchers we must, to the best of our ability, ensure our own safety in the laboratory and raise concerns when we see them and not wait for an accident. You cannot assume superiors or previous researchers have made the environment as safe as possible. They are only human and we make a lot of mistakes; it is far better to report something and find out things are as safe as they feasibly can be than to wait for something to go wrong. This is why it is incumbent upon the end user (the lab researcher) to be fully aware of their lab conditions because they are the one physically there to see the problems.
Reply »

James, K (January 26, 2017 10:14 PM)
My question is how reliable is the postdoctoral researcher? If she knew that the equipment that she was using was not the proper equipment, if she knew that safety protocols were being violated and that their were other safety concerns and still followed through with the experiment than how can she hold anyone else reliable? She should have terminated the experiment or said something before she went through with it.
Reply »

Jyllian Kemsley (January 30, 2017 1:36 PM)
There is some indication that Ekins-Coward was concerned about the hazards and asked the PI about them. See, for example, the information that was in the fire department and UCCLS reports:

We do not know how the PI responded.

Mike Schmidt (January 26, 2017 8:53 AM)
For the curmudgeons among us that are nodding in agreement with OldProf47, we need to ask ourselves what it we expect students to do when we say "prepare for that." Have we taught them what "prepare for that" means, or do we expect them to figure it out for themselves? Do we review their preparations and determine if they are adequate and suggest improvements?

We don't absolve ourselves of responsibility by telling our students or employees to "be safe." We have to teach them exactly what that means. And if we don't know what that means, then we need to get help.
Reply »

Guillermo Candelario (January 27, 2017 4:26 PM)
One point that has not been addressed is how the University complied with applicable safety regulations. Research laboratories should comply with 29 CFR 1910.1450. This standard requires training of the personnel, the provisions for protective equipment and safety measures. Also, requires to identify the circumstances under which certain laboratory procedures or activities require approval from the employer or employer’s designee before work is initiated.
Reply »

Mark the chemist (February 1, 2017 9:42 AM)
From my point of view this experiment looks very unsafe, the oxygen fraction is higher than that found in air and the hydrogen level far above the lower explosive limit. What I would argue is that even if ignition sources were excluded from the tank you would always under ideal conditions be only one step from an accident. The only question if ignition occurred would be the scale of the accident.

What I would like to know was did nobody consider diluting the gas mixture with nitrogen or argon to prevent a fire or explosion. This simple modification would have prevented this horrible event.

I have used hydrogen gas to reduce things in tube furnaces, I even work with people who use it to treat radioactive (alpha active) things in furnaces. But it is always diluted with an inert gas to about 5 % in inert gas. Even when the furnace is inside a nitrogen filled glove box it is a good idea to use an "eversafe" mixture of hydrogen and inert gas.

The reason is that if you were to work in an inert negative pressure box with pure hydrogen then a single failure such as a large air leak could in the worst case replace the box atmosphere with air, thus resulting in an accident.

Equally if you were to use a air filled box and use 5 % hydrogen then a single mistake (of connecting the wrong gas mixture to the furnace gas supply) could also result in an accident.

Here in this example of a tube furnace for the thermal treatment of MOX it is clear that you should always aim to be at least two errors away from an accident. When the consequence of the accident becomes larger and larger then you should add additional layers of protection to prevent an unwanted event or to mitigate it.

For example I know on some plants where a dust explosion is possible it is common to have weak panels which will vent the effect of a dust explosion in a safe direction. You can often see these on the equipment attached to a grain silo.

I have seen the pressure vessel I have to ask the question of did anyone consider if the pressure release valve could have mitigated such an accident. Looking at it my educated guess is that based on the size of the vessel and the size of the valve I doubt if it would have mitigated the accident into one which caused either no injury or a minor injury.

I would also like to ask the question of why was the postdoc not working from behind a wall. I think that a prudent design for high pressure work where an explosion can not be ruled out is to build a thing like a prison cell (but vented away from the humans). The large vessels where explosion are possible go inside the cell, while all the controls and gauges are operated / viewed from a position outside the cell.

I think that when the civil case is over that the CSB should investigate this event and then publish a report as they did with the Texas Tech lab accident which involved a hydrazine complex of nickel.
Reply »