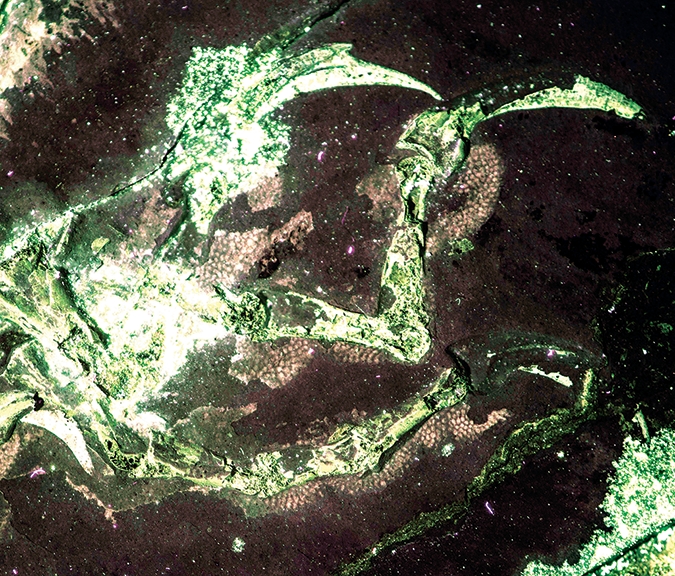 ZAP! Combining one of science’s coolest tools with some of its favorite subjects, paleontologists are now using lasers to study fossils in exquisite detail. Tom Kaye of the Foundation for Scientific Advancement and colleagues have pioneered a technique they call laser-stimulated fluorescence. They can compare geochemical differences in fossils by zapping them with a high-energy beam and snapping a long-exposure photo (PLOS One 2015, DOI: 10.1371/journal.pone.0125923). 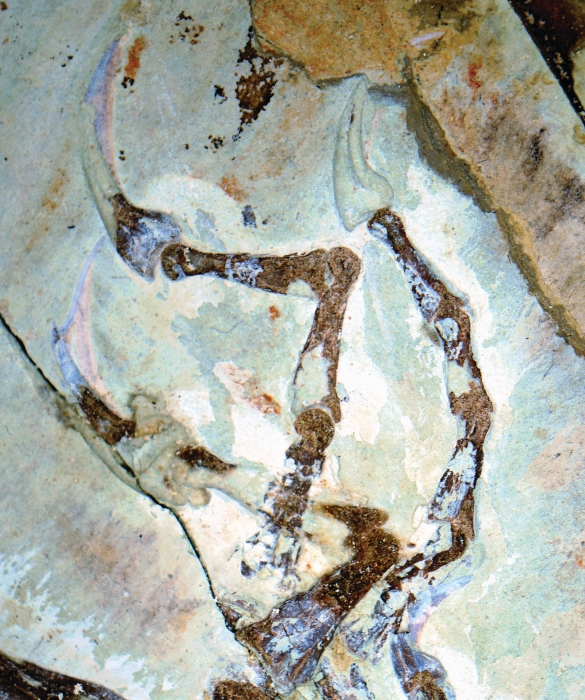 Ultraviolet light is often used to illuminate minerals. A fossil is essentially a mineral, but not many fossils fluoresce under normal UV light. Lasers cut though that problem by ramping up the intensity, allowing researchers to detect fluorescence in virtually all fossils.

The fossils fluoresce as a result of the laser photons interacting with various atoms and molecules. The photon enters the mineral and bounces around in its molecular lattice. Every time it bounces, the photon loses energy, which causes it to come out a different color.

One area where this has proved useful is in weeding out composite skeletons. Fossils with different burial conditions usually have different mineral structures. If one part of a skeleton fluoresces a separate color from the rest, that tips Kaye off that it could be two sets of bones put together.

Using the technique to examine the fossils of Chinese feathered dinosaurs, the team discovered that soft tissues such as scales, foot pads, and skin had been preserved as a fluorescent signature previously invisible to the naked eye. Kaye was astounded: “We saw scales on the feet of these feathered dinosaurs in detail that looked like they had died yesterday.”

As lasers have come down in price, this method has become more feasible for researchers to adopt. Kaye’s team is working with a drone company to fly their laser with a video camera over fossil areas at night to search for exposed bones.

“We are seeing things that we have never seen before with this technique,” Kaye says. “We think it is going to be a new age for outlining dinosaurs and ancient fossils, because now we have more than just the bones to work with.”

Earth scientists make their mark on the world 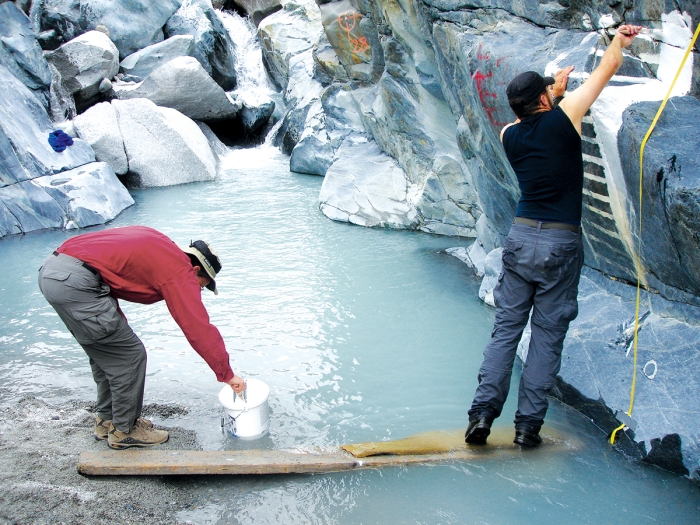 Credit: Alexander Beer/WSL Birmensdorf
Don’t fall in: Researchers replenish paint, only for it to be washed away again.

While lasers have opened up a world of possibility for paleontologists, for some earth scientists, the technology feels more like a burden. James W. Kirchner at the Swiss Federal Research Institute WSL, Birmensdorf, and colleagues have historically lugged heavy, expensive laser scanners into the mountains to monitor erosion. Now, they’ve identified an alternative: Simply paint the rocks (Earth Surf. Dynam. 2016, DOI: 10.5194/esurf-4-885-2016).

While studying a bedrock gorge below a hydropower intake in the Swiss Alps, the researchers noticed that some of the identifying marks they made wore away after the gorge was flushed with water, while others stayed put. They seized on the idea and started coating the bedrock in stripes of water-insoluble, latex-based paint. When they came back, the paint was gone from certain areas, signaling that there had been erosion.

“We were able to see things in the paint erosion data that would have been very hard to observe with more sophisticated techniques,” says Kirchner. Examining photos of the site with the naked eye, the scientists could detect signs of erosion in the paint on a much smaller scale than with the fancier technology.

Just to make sure, the researchers made two models of the gorge using the heavy, high-tech laser scanners over six months, then compared the differences in the models with the paint record. Although the paint data were purely qualitative, it told a nearly identical story about where the erosion was happening.

Kirchner believes this technique could be adopted widely with minimal risk to the environment. “We wouldn’t recommend that every graduate student get a big bucket of paint and go paint their field site, though,” he cautions. “You need to think about it before you do it.”