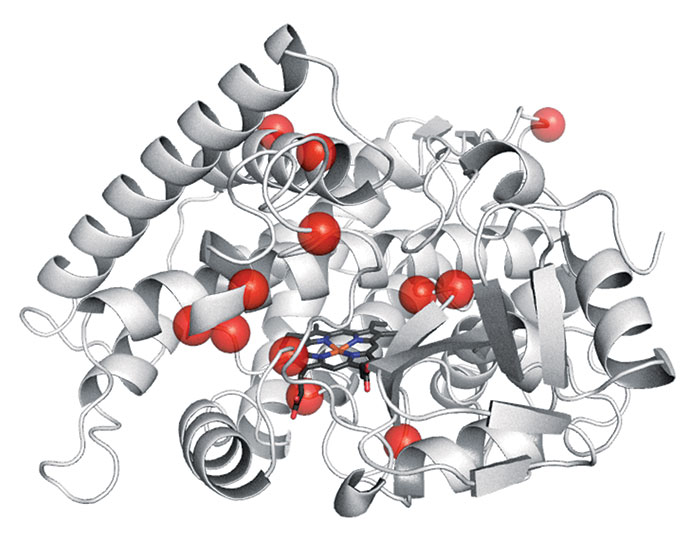 Oxidizing the end carbon atom of a terminal alkene to form an aldehyde, a process called anti-Markovnikov alkene oxidation, is difficult because the reaction is energetically unfavorable. The preferred process, in terms of energetics, is Markovnikov selectivity—oxidation of the substrate’s next-to-last carbon, forming a ketone instead of an aldehyde.

Chemists have long wanted to find better ways to achieve anti-Markovnikov selectivity in alkene oxidations—for example, to convert the aldehyde products to linear alcohols, which are commonly used in flavorings, perfumes, lubricants, and cosmetics. Catalysts exist that can perform the tricky anti-Markovnikov oxidations, but they are very unproductive and are not enantioselective.

The evolved enzyme, called aMOx, is fairly productive, catalyzing about 3,800 oxidation reactions, or turnovers, before running out of steam, compared to fewer than 10 for earlier anti-Markovnikov oxidation catalysts. In conjunction with other reagents and catalysts, the enzyme could one day convert terminal-alkene substrates to a variety of aldehyde, alcohol, and amine products for commodity and fine chemical, pharmaceutical, and agrochemical use.

The Caltech researchers started with an iron-based cytochrome P450 enzyme called P450LA1because it catalyzes a related reaction, metal-oxo alkene oxidation, in which a metal-linked oxygen attacks the double bond, typically forming an epoxide. An earlier study by another group had found that P450LA1 also made 19% aldehyde side-product by opening the epoxide. In the new study, postdoc Stephan C. Hammer, now at the University of Stuttgart, found that the enzyme actually made 45% aldehyde directly, without going through an epoxide intermediate.

The researchers then used 10 rounds of directed evolution, with styrene as a substrate, to boost anti-Markovnikov selectivity from 45% to 81%, in aMOx. aMOx works well because it stabilizes high-energy radical and carbocation intermediates created when its iron-oxo group attacks styrene’s terminal alkene, allowing anti-Markovnikov aldehyde formation to predominate.

It took 12 mutations distributed throughout the protein to transform P450LA1 into aMOx. “No one could explain how these substitutions confer this reaction selectivity, much less predict them,” Arnold says. “This illustrates the power of directed evolution to create catalysts that have eluded chemists.”

Key advantages of the evolved enzyme include its enantioselectivity and its turnover number, “which probably still isn’t sufficient for commercial viability but pretty respectable,” says John T. Groves of Princeton University, who specializes in biomimetic catalysis.

There’s currently a push in academia and industry to replace conventional catalytic reactions with enzymatic processes that use aqueous solvents at ambient temperatures and pressures, work readily in flow systems, and don’t require catalyst separations, Groves says. “These days, a tie will go to the biocatalyst for those reasons. The new study is an important step in the right direction.”

Synthesis
Ketones Couple With Olefins In Alkylation Advance
Synthesis
Getting Enzymes To Make Cyclopropanes
Synthesis
Rule breaking Leads to Primary Alcohols …
Share X
To send an e-mail to multiple recipients, separate e-mail addresses with a comma, semicolon, or both.
Title: Enzyme beats catalysts at oxidation game
Author: Stu Borman
Chemical & Engineering News will not share your email address with any other person or company.

Comments
KM (October 13, 2017 2:14 PM)
Nobody in industry wants to run a reaction as exothermic as this (40-50 kcal/mol) at "ambient temperature". To do so would require refrigeration to remove the heat evolved, and that is very expensive and wasteful. It is much more energy efficient to run an exothermic reaction at elevated temperature. Methods for heat removal become less costly and wasteful. At high enough temp the waste heat can be used to produce high pressure steam, which is actually valuable.

Also, to quibble with the headline - enzymes are catalysts.
Reply »

Sagar Khare (October 26, 2017 9:03 AM)
Excellent point! What might be a good temperature to run this at? Stay tuned for an enzyme thermostabilization method that might help (in press in PNAS) with running this reaction at high temperatures.
Reply »

Jr (November 3, 2017 8:43 PM)
So, about the reaction's entalpy, can't it be "diluded" in a multi-step reaction to overcome heat production? Do you know where I can find info on costs of production, like what factors might be considered etc.?
Reply »