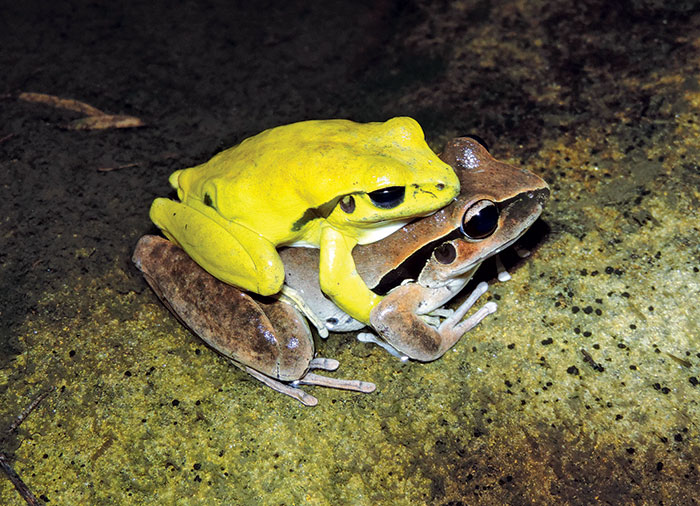 For some species of frogs, sex gets pretty chaotic. The amphibians gather in large groups near bodies of water—a preferred egg-laying spot—and the males go into a frenzy, trying to grab onto any female they can.

The resulting sexual mayhem can lead to cases of mistaken identity. “There are a lot of reports of frogs grabbing onto inanimate objects,” says Rayna C. Bell of the Smithsonian Institution’s National Museum of Natural History.

These bright colors may serve as a way for the male frogs to tell others, “Back off” or “Don’t grab onto me,” Bell tells Newscripts.

Scientists don’t know much about the signals frogs send each other through their skin colors, Bell says. When it comes to interfrog signaling, scientists have focused mainly on vocal calls.

Bell, along with Martin Whiting and Grant Webster of Macquarie University, wanted to catalog the frog species that temporarily change their color and find a possible explanation for why they do it.

By scanning the scientific literature and field guides, the scientists found 178 frog species whose males change their colors during breeding seasons. And through an analysis of hylid tree frog species, they found that switching colors was associated with breeding among large groups.

This association likely rules out the potential explanation that the colors serve as a way to attract mates—similar to how some male birds display elaborate plumage for females. “In these big groups, females don’t necessarily have a choice about who they mate with,” Bell says. “You’ll see tons of males grabbing onto the same female. It’s not like she is able to select which one is the brightest yellow.”

Also, when the scientists studied the evolutionary history of these species, they found that the frogs evolved the chaotic breeding style first and then the color change. “That’s the order you would expect if the color changes were beneficial in the context of forming large breeding groups,” Bell says. 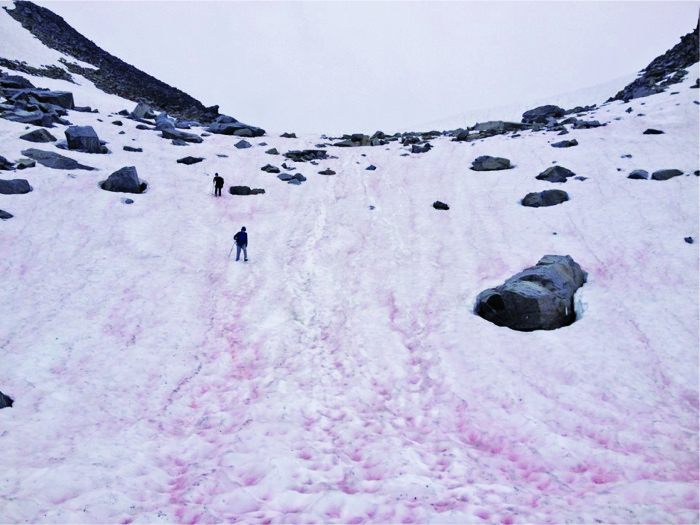 If you hike along the glaciers in Alaska or elsewhere in the world, you may see stretches of snow and ice that look like someone sprayed them with red Kool-Aid.

But the red color isn’t caused by sugary drinks. It’s microscopic algae living in the snow.

The algae are red because of astaxanthin pigments. The microbes need sunlight to power photosynthesis, but too much light can set off damaging photochemical reactions. The algae use the pigments to absorb some of the sunlight.

The energy of the absorbed light then gets dissipated as heat. For years, scientists have speculated that these microbes might contribute to the melting of snow and ice on glaciers. Dial and his colleagues wanted to run an experiment to confirm it.

The team went to Alaska’s Harding Icefield and set up a series of experimental plots in the snow. Each plot had four regions they treated differently. Two were sprayed with either water or fertilizer to help encourage algal growth. “It was just fertilizer you’d buy off the shelf at Home Depot,” Dial tells Newscripts. On the third region, they sprayed bleach to kill algae. And the fourth was left alone.

By measuring the abundance of the microbes and the snowmelt in each region, the scientists could demonstrate that more algae meant more snowmelt.

These microbial heaters could have implications for climate change, Dial says. As the climate warms, the algae will be able to live on more glaciers across the world, helping melt them. Glaciers help cool Earth by reflecting some of the sun’s light. So algae-aided glacier loss can contribute to further warming.

Chemical Communication
Sweet-smelling study aids, and why stinky plastic is a trap for turtles
Environment
Green chemistry at the Rio Olympics
Biological Chemistry
Festival Of Fungi: From Spongelike To Dishwasher-Hardy
Share X
To send an e-mail to multiple recipients, separate e-mail addresses with a comma, semicolon, or both.
Title: Sexy yellow frogs and hot red snow
Author: Michael Torrice
Chemical & Engineering News will not share your email address with any other person or company.