Society honors members for their countless hours of service

“Without all of you, we would not be the society we are today,” said ACS President Allison Campbell in her opening remarks. “It is because of you that this year’s ChemLuminary theme is ‘Our Volunteers & Their Monumental Impact.’ ”

D. Richard Cobb, recipient of the 2017 Award for Volunteer Service to the American Chemical Society, gave the keynote lecture, titled “Hidden Figures Make a Monumental Impact.” Cobb has volunteered for ACS locally, regionally, and nationally, and he is being recognized for his leadership, which has had a wide-ranging impact on the society.

[+]Enlarge
Credit: Peter Cutts Photography
Cobb spoke about the importance of volunteerism during his keynote address. 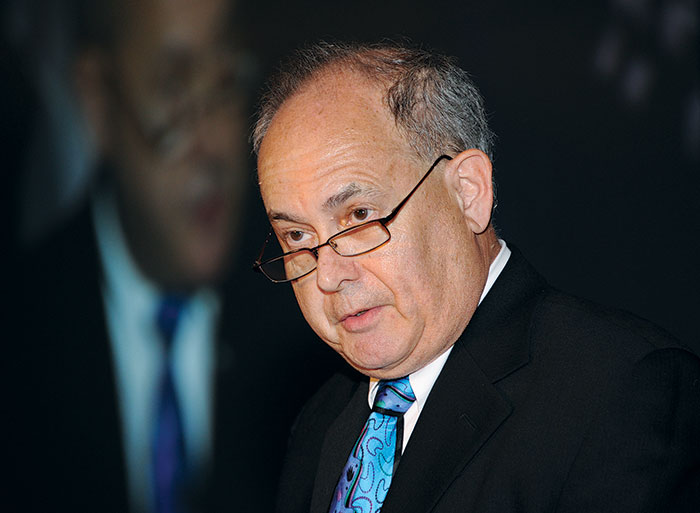 Credit: Peter Cutts Photography
Cobb spoke about the importance of volunteerism during his keynote address.

During his talk, Cobb spoke of the behind-the-scenes work of ACS’s many volunteers. “It takes a diverse team of individuals on multiple levels to create some of the greatest successes,” he said. “These are individuals who show respect to each other, help each other to succeed, stand up for each other, stay curious, and realize that often their own contributions may remain hidden—but that does not stop them from moving forward with determination.”

Other ChemLuminary Awards presented in Washington, D.C., are as follows:

The 2016 Helen M. Free Award for Public Outreach was presented to Mark Griep for his “Chemistry in the Movies” projects, which have inspired students by discussing chemistry through film. One of his most notable projects was promotion of Rachel Lloyd, the first woman in the U.S. to receive a chemistry Ph.D.

The Outstanding Continuing Public Relations Program of a Local Section Award went to the Puerto Rico Section for hosting Island Road Tour science cafés, which connect a scientific concept to the local environment. For example, in the agriculture science café, local experts demonstrated composting, according to ACS.

The Award for the Best New Public Relations Program of a Local Section went to the Nashville Local Section. One of its programs occurred during the Zika virus outbreak and featured a discussion on the possibility of genetically engineering mosquitoes, ACS says.

The Best Overall WCC Local Section Award went to the East Central Illinois Local Section. The local section organized a day camp for middle school girls, during which they made liquid nitrogen ice cream. The girls took home detailed instructions and explanations so they could repeat the activities at home.

The Outstanding Local Section Career Program Award went to the Colorado Local Section for its “Young Talent in Colorado & Beyond” symposium, in which 110 young scientists in Colorado gave presentations and practiced networking.

The Outstanding Local Section Younger Chemists Committee Award went to the Savannah River Section for boosting its membership 22% from 2015 through its YCC activities and for increasing volunteer participation.

The Outstanding New Local Section Younger Chemists Committee Award went to the East Central Illinois Local Section for its events, including a hands-on workshop for Big Brothers Big Sisters with the local section’s Encouraging Tomorrow’s Chemists graduate group, a Women Chemists Committee networking social, and a workshop for students on making the transition from undergraduate to graduate school.

The Outstanding or Creative Local Section Younger Chemists Committee Event Award went to the Colorado Local Section for its “Young Talent in Colorado & Beyond” symposium, in which young scientists gave presentations and networked.

The Award for Recognition of Innovation & Outstanding Service to Members of a Division went to the Division of Small Chemical Businesses. The division was honored for its work on four ACS regional meetings, in which it organized technical programming, the exposition, and networking events. The division also created business and entrepreneurial tracks within the regional meetings.

The Award for Most Unique Project as Funded by a Division Innovative Project Grant went to the Division of Professional Relations for organizing a symposium series on Women in Innovation.

The Outstanding Kids & Chemistry Award went to the Midland Section for attracting more than 15,000 participants to its programs. The section also linked outreach-related strategic planning goals to their activities with students, according to ACS.

The Outstanding Project SEED Program Award went to the Puerto Rico Section, which enabled 14 Project SEED students to conduct research, participate in safety training and other workshops, and engage in social activities. Five of the students were awarded additional Project SEED scholarships.

The ACS President’s Award for Local Section Government Affairs went to the Chicago Section, which held a program on the chemistry of municipal water systems.

The Award for Outstanding Sustainability Activities went to the Northeastern Section. The section partnered with Pfizer; the University of Massachusetts, Boston; and its Younger Chemists Committee to hold an event that included talks from Pfizer research chemists on green chemistry principles and lesson plans and strategies from green chemistry educators, according to ACS.

The Award for Best Event or Activity Organized by, or Benefiting, the Applied Chemical Technology Professional Community went to the Midland Section. The section’s Mid-Michigan Technicians Group (MMTG) organized a symposium celebrating the group’s 25th anniversary. The event included a keynote address followed by a networking reception featuring MMTG members who had won local or national ACS technicians awards.

The Award for Best Overall Local Section Minority Affairs Committee went to the Orange County Local Section for its National Chemistry Week celebration at the Santa Ana Zoo. The section had more than 150 volunteers from college and university groups.

The Global Engagement Award for Local Sections went to the Midland Section for its Science Education for Teachers in Guatemala workshops, which aim to encourage science education by working with local educators.

The Global Engagement Award for Technical Divisions went to the Division of Agricultural & Food Chemistry for organizing its first “International Student Chapter Symposium.” The event brought international students together to share their research and network at the ACS national meeting. 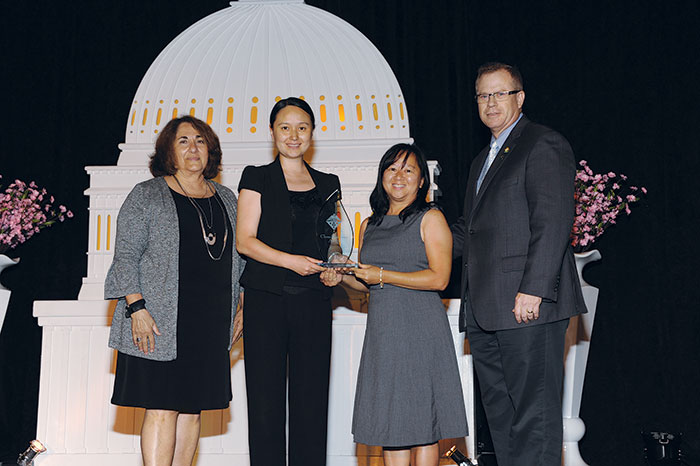 The Award for Most Innovative Activity in a Local Section for Senior Chemists went to the Midland Section for planning two seasonal activities—a summer luncheon and a fall hayride. 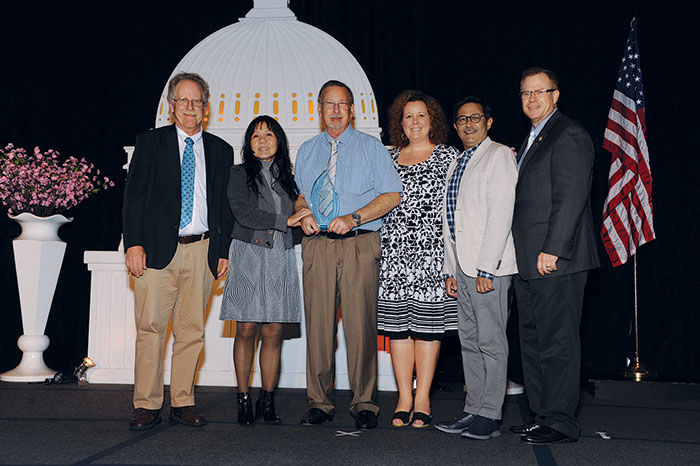 The Award for Best NCW Event Organized by a Student Group went to the Kentucky Lake Local Section for hosting a National Chemistry Week event featuring forensic chemistry. Approximately 30 volunteers engaged 150 members of the community in hands-on activities and demonstrations.

The Award for Creative & Innovative Use of the CCED Theme went to the Midland Section for cosponsoring a community expo for Chemists Celebrate Earth Day. The event featured interactive activities that explored various green topics, such as the efficiency of insulation against heat and sound.

The Award for Outstanding Community Involvement in CCED went to the Puerto Rico Section for its Festival de Química event, whose hands-on activities, lecture series, and public exhibits reached more than 1,500 people.

The Award for Outstanding Community Involvement in NCW went to the Virginia Section, which hosted two National Chemistry Week events during Halloween weekend. Attendees carved the elements of the periodic table into pumpkins and set up a forensic laboratory that showed how chemistry is an interdisciplinary science.

The Award for Outstanding NCW Event for a Specific Audience went to the Orange County Local Section.More than 150 volunteers conducted hands-on science activities at the Santa Ana Zoo. The local section has been hosting this event since the late 1990s.

The Award for Outstanding Ongoing NCW Event went to the Pittsburgh Local Section, which participated in National Chemistry Week for its 18th consecutive year. The local section’s two-day event had a near-record attendance of 5,800 participants.

The Award for Outstanding Public Outreach Event Organized by a Student Group went to the Kentucky Lake Local Section. The section partnered with the University of Tennessee, Martin, student members to cohost a mini-symposium on current drinking water issues. 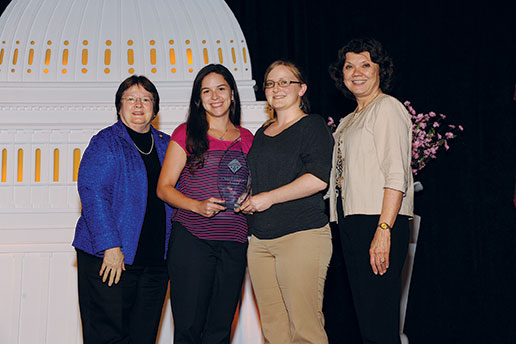 The Award for Best Activity or Program in a Local Section Stimulating Membership Involvement went to the Binghamton Local Section, which celebrated its 75th anniversary through several events, including the 2016 Northeast Regional Meeting. Membership in the local section grew 4%.

The Award for Most Innovative New Activity or Program went to the Kanawha Valley Section, which in 2016 spearheaded the relief and rebuilding of science laboratories throughout its flooded regions. Industry and academic partners donated more than $100,000 to affected schools for purchasing new equipment.

The Outstanding Performance Awards recognize local sections that have demonstrated excellent overall achievement by offering multiple programs for members and reaching out to their communities. Local section size categories are determined by the number of members: small, 50–199; medium-small, 200–399; medium, 400–799; medium-large, 800–1,599; large, 1,600–3,199; and very large, 3,200 and above.

In the small category, the Award for Outstanding Performance by a Local Section went to the Binghamton Local Section, which achieved all its 2016 goals, hosted the Northeast Regional Meeting, and celebrated its 75th anniversary.

In the medium-small category, the Award for Outstanding Performance by a Local Section went to the Kentucky Lake Local Section, which created Science Centers for children ages 0 to 14 to explore science while the adults attend a talk. The initiative helped increase attendance by new members and families.

In the medium category, the Award for Outstanding Performance by a Local Section went to the Midland Section, which hosted over 75 events, including networking events for students and professionals, and a Local Section Women Chemists Committee event with Dow Chemical’s Gays, Lesbians & Allies organization.

In the large category, the Award for Outstanding Performance by a Local Section went to the Indiana Local Section, which sponsored 27 events and collaborated with other groups and organizations.

In the very large category, the Award for Outstanding Performance by a Local Section went to the Chicago Section, which live streamed its monthly programs to two additional sites, helping overcome distance issues.

For more information about the ChemLuminary Awards and to see more photos from this year’s celebration, visit www.acs.org/chemluminary.