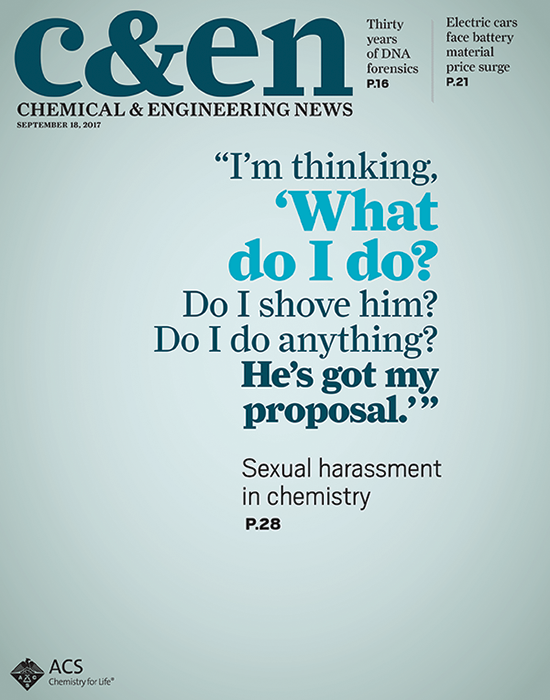 We appreciated your coverage of sexual harassment in chemistry in the Sept. 18 issue (page 28), including mention of an important conversation between women at a Gordon Research Conference. GRC has long had a zero-tolerance policy for inappropriate behavior. However, to fully address the challenges women face in science, we believed discussion within our conference communities was also required to create lasting change. In 2016 the GRC Board of Trustees approved the Power Hour, a voluntary session designed for all GRCs to discuss the impact of gender-specific issues, including discrimination and harassment.

The Power Hour format is derived from a prototypical session held by the Physical Organic Chemistry GRC, and it has proved incredibly popular, with 108 Power Hours taking place in 2017. Each Power Hour organizer is a woman selected from the conference community by the conference chair to serve as host. Organizers tailor the program format to fit the needs of their individual communities. GRC provides suggested talking points and additional resources to help the organizer prepare for the session. Average attendance at a Power Hour is 60 people, and 40% of attendees are male.

GRC believes that diversity and inclusion help create thriving scientific communities that drive innovation. We are pleased to offer the Power Hour as a forum for opening conversations in GRC communities that have the potential to change culture and address gender inequity in meaningful ways.

Readers took to the web to discuss sexual harassment in chemistry. cenm.ag/harassment

I am very sad and angry that there is such a persistent destructive element in academia. While I have not witnessed examples of sexual harassment such as those you itemize, there are certainly strong discriminatory practices that are pervasive and impede the academic careers of women in science and medicine. Sexual harassment is perhaps the most egregious. It is upsetting that my wife and daughters still have to encounter such threats to themselves and their careers. Thank you for continuing to focus attention on the issue. Men in academia need to take a leadership role in rectifying this situation—for the benefit of our professions and our families. John Healey, MD

I truly appreciate you compiling this article and am thankful for the women who shared their personal accounts. That could not have been easy. This is an incredibly pervasive problem and putting a spotlight on it, discussing it, and raising awareness of it is the first step toward changing a culture that allows and fosters this kind of sexual hostility toward women in STEM and other disciplines. Noah

I’m so glad someone wrote a fantastic article. I have mentioned my own story to ACS and I am glad so many students and former students have spoken up. I am not sure how effective reporting to the universities will be because as this article mentions, they still will hire guilty faculty as long as they bring in funding. The administration just doesn’t care. I was victim blamed by the dean of the college of medicine and she is a woman but still had no sympathy whatsoever. I really think we need an external, neutral party like ACS to be involved. I also think that this is a portion of the general abuse of power issues that tenured professors and administrators have over students, postdocs, and even junior faculty. Dr. Jennifer J Archer

And yet, many real relationships have arisen out of interactions between professors and their grad students or postdocs. Are you suggesting that these marriages are based on harassment? One size does not fit all, as this article suggests. You have to give two consenting adults a bit of credit for making their own decisions about who to have a relationship with. This article paints all women as victims, instead of the strong and capable women chemists that most of us are. In fact, in many of the examples given, the women did actually reject the advances they weren’t interested in. That’s the behavior we should be training people for, as well as making sure that the person making the advance knows to lay off if their advance is not well received. It’s certainly a better strategy than filing a complaint with a bureaucracy. Save that one for repeated, unwanted advances where you’ve told the person you’re not interested and he or she persists—which, by the way, is what the law defines as sexual harassment. postdoc

Career Tips
Zoomed out? Here’s how to manage expectations
Careers
Career Ladder: Joyce Nethery
Postdocs
Postdocs ponder missed opportunities caused by the coronavirus pandemic
Share X
To send an e-mail to multiple recipients, separate e-mail addresses with a comma, semicolon, or both.
Title: Reactions
Author:
Chemical & Engineering News will not share your email address with any other person or company.