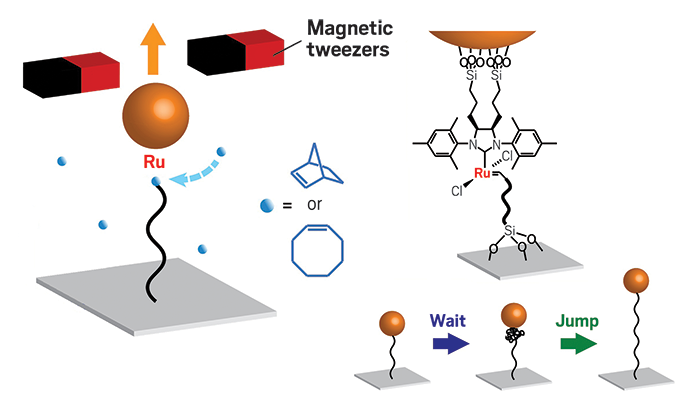 Credit: Adapted from Science
By attaching a polymer chain to a glass slide (gray) and to a magnetic particle (orange) bound to the ruthenium catalyst (linkage shown at right) and pulling the chain out with a pair of magnetic tweezers, researchers are able to watch the wait and jump dynamics of ring-opening polymerization.

When chemists think about polymerization, they typically envision a wormlike polymer growing smoothly and continuously from a catalyst. But the actual view of how polymer growth unfolds has remained murky because of the limitations of analytical techniques.

With the aid of molecular dynamics computer simulations, the researchers attribute this jerky mechanism to formation of polymer tangles—which they call hair balls—that form around the catalyst as thousands of new monomer units are added to the growing chain. The hair balls sporadically unravel after a couple of minutes, and a new hair ball starts to form.

Besides helping researchers better understand catalyst activity, polymerization rates, and bulk polymer properties, the researchers suggest their discovery of the growth spurts may be relevant to how cells produce biopolymers such as proteins, nucleic acids, and polysaccharides (Science 2017, DOI: 10.1126/science.aan6837).

The newfound wait and jump steps of polymer lengthening were previously obscured by “ensemble averaging,” Blum explains, in which researchers use techniques such as dynamic light scattering to observe all the molecules in a sample at once, and information about size distributions and other polymer parameters are extracted from the data. Single-molecule approaches avoid limitations of ensemble averaging, Blum says, but these measurement techniques are often a double-edged sword because the resulting data are a challenge to interpret without corroborating spectroscopic methods. By including molecular dynamics simulations, the Cornell team was able to get a clearer picture of conformational changes in the growing polymer.

“The ability to see dynamics in an important reaction like polymerization and to understand them through modeling is an exciting technological advance,” Blum says.

In their single-molecule experiment, the Cornell researchers attached the free end of a polymer chain to a glass surface using a silane linkage and attached the ruthenium catalyst at the growing end of the polymer to a magnetic particle held in place by a pair of magnetic tweezers. By tracking the position of the magnetic particle, the team achieved real-time visualization of a single chain’s growth during ring-opening polymerization.

“The Cornell team’s tantalizing view of how polymer chains grow sheds light on many synthetic challenges dating from the earliest days of polymer chemistry,” Hawker adds. “This work will have major implications far beyond single-chain dynamics.”

Comments
Luiz Carlos Anjos (October 26, 2017 7:34 AM)
That´s definitely a breakthrough to a better understanding about polymers growth mechanism. But one question can be asked about the approach applied on the study. How can we assure that the "wait and jump" mechanism only happens due to the presence of a heavy metal, used as catalyst, at the growing end of the polymer? Could that mechanism occur using any other catalyst or even without it?

Steve Ritter (October 26, 2017 4:36 PM)
Peng Chen responds:
The metal-based catalyst is the source of the ring-opening metathesis polymerization reaction; it inserts monomers to grow the polymer. Without the catalyst, there will be no polymerization reaction and thus no presence of the hairballs that are formed from the newly inserted monomers and that give rise to the wait-and-jump behaviors in the extension of a growing polymer. Whether other catalysts will give such phenomenon remains to be examined, but we are optimistic about the generality of our observed mechanism.
Reply »