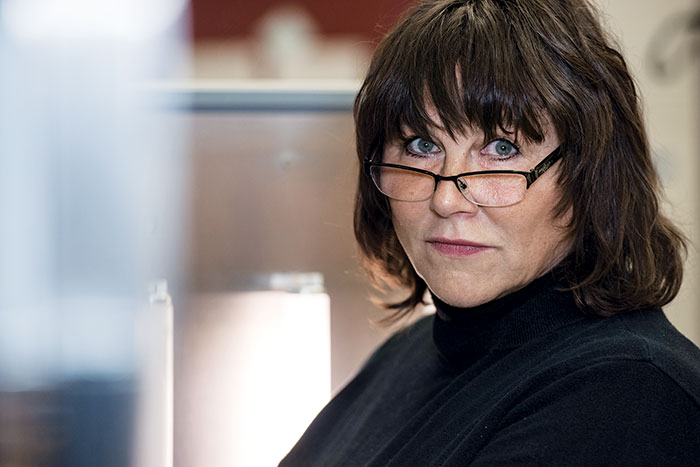 Was there life on Mars? If so, microorganisms would have left chemical signatures in martian rocks, as they have done here on Earth. Astrobiologist Sherry Cady of Pacific Northwest National Laboratory is helping Mars mission teams from the National Aeronautics & Space Administration decide where to search for fossilized evidence of life on the red planet. As a member of the SETI Institute team that is part of the NASA Astrobiology Institute, she studies Earth environments that are analogs for potential ecosystems on Mars, including hot springs, deserts, and the remains of ancient lakes. She talked with Deirdre Lockwood about how these extreme environments inform the search for life in outer space.

Favorite spot to look for signs of life: “Yellowstone, around the hot springs. When I’m there, I always take some time to imagine what it must have been like on early Earth.”

Next fieldwork location: High-altitude hot springs near Chile’s Atacama Desert, which experiences some of the highest ultraviolet readings recorded worldwide.

Hobbies: Having fun with her family, horses, dogs, and cats; swimming; gardening; and traveling.

How did you first get interested in this field?

During my postdoc at NASA’s Ames Research Center, they sent me out to Yellowstone National Park in Wyoming to look at high-temperature geological formations at the hot springs. These formations looked like a lot of structures in the ancient rock record that are associated with bacterial communities. The question was, How could these structures form at high temperatures in Yellowstone hot springs? At that point, people did not think that the Yellowstone structures were associated with life. I got out there, collected the structures, analyzed them in the lab, and found that they were influenced by biofilms that form on their surfaces.

That was pretty cool because this was an environment where the microorganisms are living at life’s upper temperature limit, right near boiling. The work helped emphasize this understanding we all have now, which is if bacteria actually live on a surface, on sediment, or on a chemical precipitate and are building up layer by layer, that life will more than likely have some sort of influence on those deposits. It got me hooked. I still work at hot springs. I fell in love with the environment.

What’s the connection between these Earth environments and Mars?

Relatively early in Mars’s history, it lost its atmosphere and the planet cooled. Instead of having an internal heat source, like we have deep inside Earth, a heat source could have been something external, like a huge asteroid or a meteor that came in and hit the planet. That impact energy would get transferred into heat energy and fuel hydrothermal systems for quite a long time. With these heat sources, hot springs could have formed on early Mars because it had water at that time. Early life on Earth lived in hydrothermal systems, so the same could have happened on Mars.

How does studying microbes in extreme environments on Earth help us search for life on other planets?

One of the opportunities we have on Earth is to study how microbes can influence their environment in a physical way. It happens at many scales. They can influence the structures in the rock to create patterns that you can see. They can influence, on a smaller scale, the type and location of specific minerals. And then, of course, they influence the inventory of organic molecules in a deposit just by their very presence, their activity, or even how they responded to the environmental features that ultimately led to their demise. For example, bacteria can produce additional extracellular slime to prevent them from fully dehydrating in desiccating environments.

What are some signs that you look for that would make you say, “Oh, that looks like a microbial signature”?

Initially, it’s based on your understanding of the geological context of a particular area. Then, looking closer—in a hot spring area, for example—sometimes microorganisms form tufted mats. Sometimes they form flat biofilms. Sometimes they form these beautiful streamers that flow in the hot spring fluid as it passes. These features can become mineralized and fossilized, and we see these in the rock record. Those are our signposts for how to reconstruct the paleoenvironment of what would have been, at one point, an ecosystem, or at least an environment that could have supported life.

If you could put any instrument on board the next Mars rover to do remote analysis, what would it be?

Right now, we still have to analyze materials in bulk rather than specific features in a rock of interest. I’d like to be able to do in situ chemical imaging to recognize something at a microscopic to submicroscopic scale that looks like evidence of life and then interrogate the chemical composition of those features. Are there organics? Are they in the position where we would expect them to be, like lipids in membranes? Or are they organics just dispersed in a rock? Do they have specific isotopic features or chirality, other indicators that would be evidence of potential biogenic influence on the molecules? If we find something that looks like life, I’d like to be able to interrogate it in different ways that help reveal all the secrets that the structures hold.

What if life on Mars were extremely different from what we would expect it to be? How would you recognize it?

The position that I think most scientists doing this type of work are taking is that life probably was not that much different from the earliest forms of life on Earth in the sense that it would have figured out a way, if it was in a hospitable environment, to stay in that environment if it could sustain itself. That means it would attach to rocks, for example, or attach to a surface to access water and nutrients. It would have to metabolize in its environment, so it would have some sort of influence on the geochemistry of its surroundings.

We assume it’s carbon-based and that it would be processing carbon-based molecules in specific ways—using gas molecules or organic molecules similar to those that were being delivered to planets through asteroids and meteorites and comets. Life, if it did emerge on or was transferred from a nearby planet to Mars, would have had opportunities to sustain itself for quite a while until the environment changed drastically.

Deirdre Lockwood is a freelance writer. A version of this article appeared in ACS Central Science: cenm.ag/cady. This interview was edited for length and clarity.

Computational Chemistry
Robot runs almost 700 chemistry experiments in 8 days
Nuclear Chemistry
Chemistry in Pictures: Lego power
Computational Chemistry
Two groups use artificial intelligence to find compounds that could fight the novel coronavirus
Share X
To send an e-mail to multiple recipients, separate e-mail addresses with a comma, semicolon, or both.
Title: Astrobiologist Sherry Cady looks to Earth’s remote places to aid the search for past life on Mars
Author: Deirdre Lockwood
Chemical & Engineering News will not share your email address with any other person or company.