Cured-in-place pipe repairs could lead to harmful emissions for workers and the public, research shows 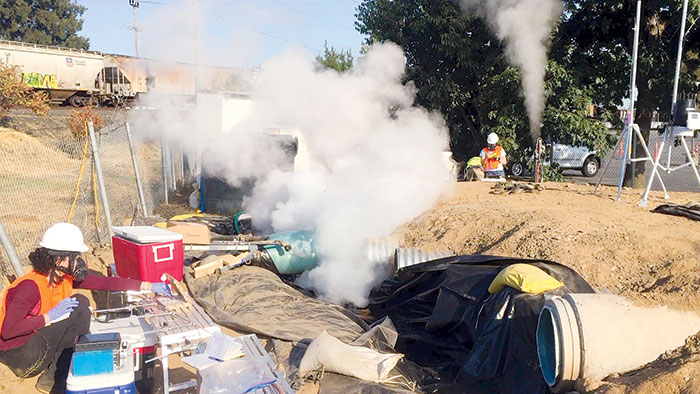 When a municipality repairs water or sewer pipes, it faces what seems like an easy decision: Dig up roads to replace the pipes entirely, or thread a tube of polymer resin through the damaged pipes, then inflate and cure the tube to create a new plastic pipe inside the old one. The decision to go with the second option is made even easier because the curing process appears relatively innocuous—it uses water, steam, or ultraviolet light. 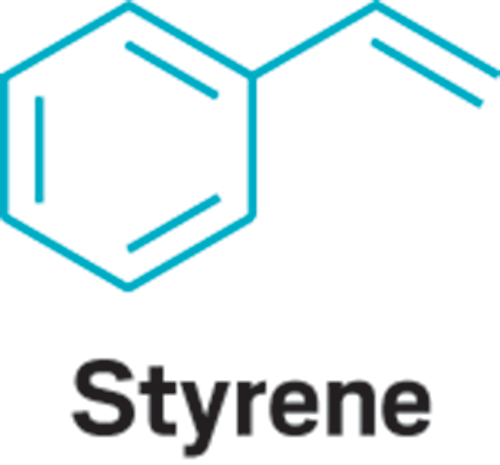 But studies of the process are starting to show that so-called cured-in-place pipe (CIPP) might not be as innocuous as it sounds. Over the past decade, researchers have found styrene and other suspected carcinogens leaching from the pipes and winding up in waterways. A study published earlier this year investigating steam-cured CIPP projects in the field additionally found that the “steam” emitted into the air during installation was actually a complex mixture of organic vapor, water vapor, particulates, and liquid droplets (Environ. Sci. Technol. Lett. 2017, DOI: 10.1021/acs.estlett.7b00237).

“All of the installation processes emit chemicals, based on our personal and field testing experience,” says Andrew J. Whelton, a professor of environmental engineering at Purdue University. Whelton led the emissions study as well as some of the research on CIPP water contamination. “Nobody really understands the scale, complexity, and quantity of emissions and the scale of work-site or nearby public exposure,” Whelton adds.

In CIPP installation, workers snake a felt or fiberglass tube impregnated with polymer resin into the damaged pipe. In the U.S., the resin is commonly styrene-based polyester and vinyl ester. Workers inflate the polymer tube to line the preexisting pipe and then cure the polymer by circulating hot water or steam for several hours. In some cases, workers may also use costly ultraviolet light to cure the polymer.

When water or steam is used for curing, the water or steam condensate should be collected and treated as waste—but workers often dump at least the water on-site, ecologist Bridget M. Donaldson of the Virginia Department of Transportation told C&EN in 2015.

After Whelton published research on the chemicals that wind up in water and steam condensate from CIPP installation, “homeowners and other people around the country started calling and asking about air emissions,” Whelton says. When CIPP was being installed nearby, these residents smelled odors, and some said they became ill. When the people reported these effects locally at the time, “They were told by municipalities and contractors that their exposures were safe and harmless,” Whelton says.

Nobody really understands the scale, complexity, and quantity of emissions and the scale of work-site or nearby public exposure.
Andrew J. Whelton, environmental engineering professor, Purdue University

Those stories prompted Whelton and his research group to look for data to back up the claims that CIPP process emissions were harmless. They found four studies of CIPP chemical air emissions, all of which detected styrene at potentially hazardous levels. They also found dozens of incidents of CIPP-installation-related air contamination in homes, schools, and office buildings in Australia, Canada, the U.K., and the U.S.

Whelton and colleagues went on to monitor emissions from seven steam-cured CIPP installations in Indiana and California in 2016. They monitored air emissions in real time and captured and condensed airborne material for later analysis.

They found a multiphase mixture of chemicals emitted into the air. The mixture included water vapor, of course, and also volatile organic carbon species, particulates of condensed organic species that included partially cured resin, and liquid droplets of water and organic compounds. The team measured levels of several specific compounds, including acetone, acetophenone, phenol, and styrene.

Notably, the type and amount of chemicals varied for different CIPP installations, even for the same resin used in the same diameter and type of existing pipe. This variation would likely increase when comparing CIPP emissions involving different types of resin and curing materials.

In a statement responding to publication of the research, the National Association of Sewer Service Companies (NASSCO) says, “It is clear that NASSCO guidelines and specific quality and safety protocols were not utilized during the testing performed. … This is of great concern to NASSCO and other organizations aligned to our industry that continually use, monitor and evaluate the effectiveness and safety levels of CIPP technology.” NASSCO has since requested proposals “to evaluate the potential release of organic chemicals in the steam exhaust and other release points during pipe rehabilitation.”

Several municipalities and consulting firms, upon hearing of the research results, have contacted Whelton for assistance with addressing potential worker exposure. He in turn refers them to the U.S. National Institute for Occupational Safety & Health (NIOSH).

CIPP concerns are new for NIOSH, and “anytime there’s a new process or emerging issue, NIOSH is interested in looking at it for occupational exposure,” says Rachel Bailey, a medical officer with NIOSH’s respiratory health division. “In the CIPP process, there seem to be a lot of volatile organic carbon species, including styrene, that are associated with mucus membrane irritation, blurred vision, headaches, fatigue, balance, and concentration.” When C&EN spoke with Bailey, NIOSH had received one request to do a health hazard evaluation for worker exposure related to CIPP. Following up on that request, NIOSH would typically look at processes and procedures and the types of personal protective equipment used and then determine how to assess exposure, Bailey says.

“We proved that many of the assumptions that have been made for years about CIPP technology are incorrect,” with concerns for both workers and the public, Whelton says. “Worker safety organizations and health departments need to step up and start paying more attention.”

Comments
Philip Allen (November 1, 2017 4:46 PM)
This article did not mention epoxy resins, a styrene-free alternative to unsaturated polyster and vinyl ester resin systems in CIPP. Epoxy resins are used for CIPP of potable water pipes, and may also be used for storm or sanitary sewers if a styrene-free system is desired.
Reply »

lana (November 7, 2017 12:21 PM)
Phillip, can you point us to air emissions data or risk assessments for epoxy CIPP installs?
Reply »