Despite a setback in developing injection-free delivery methods, some strategies are showing promise

by Sarah Webb, special to C&EN 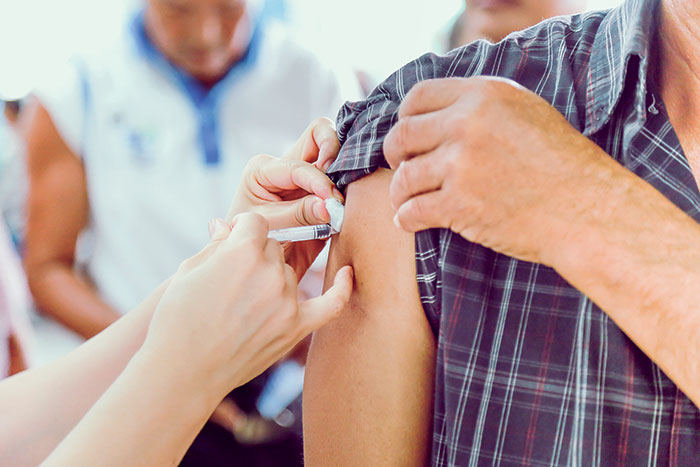 Credit: Shutterstock
Could new delivery methods one day make flu shots a thing of the past?

Autumn is here: Time to get a flu shot. But that seasonal jab in the arm may someday be history. Some less invasive immunization options are already available, and other developments now in clinical testing could make flu vaccines more effective and convenient.

Vaccines for many infectious diseases confer long-term immunity with one shot or a series of injections, but researchers haven’t yet found a universal vaccine for the many viral strains that cause influenza. Instead, as flu viruses rapidly mutate, public health organizations decide each season which strains are likely to predominate. Producers then manufacture vaccines based on those guidelines. This means shots are only partially protective and must be administered every year.

Some years the shot is more effective than others: In the 2014–15 season, people who received the shot were only 19% less likely to get sick than those who didn’t. By comparison, in 2010–11, the effectiveness was 60%, according to the U.S. Centers for Disease Control & Prevention (CDC). Although these vaccines are still crucial for preventing widespread illness and controlling outbreaks, clinicians and public health experts would like to have better tools to deliver vaccines and fight the influenza virus.

Fifteen years ago, inhaled vaccines looked like a promising strategy to handle the flu. In addition to offering a new way to deliver antigens that provoke the body to produce protective antibodies, the vaccines contain a weakened live virus instead of an inactivated (killed) virus like the injected flu shots do. This approach can trigger a strong immune response in the respiratory tract, particularly in children, who have had limited past exposure to the flu.

First licensed by the U.S. Food & Drug Administration in 2003, MedImmune’s FluMist appeared to work for several years. But an advisory committee for CDC advised against using the inhaled vaccine during the 2016–17 season, and again this year, after reviewing studies suggesting that the vaccine has lost its punch. (Versions of the vaccine are still recommended for use in Canada and in Europe.)

What happened with FluMist is still unclear, but researchers are interested in the answers, says John J. Treanor, a vaccine and infectious disease expert at the University of Rochester School of Medicine & Dentistry. One thing scientists have discovered is that some of the recent live strains used in the vaccine don’t replicate as well as ones used in earlier years. A spokesperson from AstraZeneca, MedImmune’s parent company, notes that the company’s investigation continues.

An advantage of FluMist was that it didn’t require a poke. The prospect of getting a jab is one barrier to vaccination for some people, along with the time, cost, and overall access to the medication. And needlestick injuries to health care professionals are “a major problem, particularly in places in the world which have limited resources,” Treanor says.

One possible solution is a flu vaccine that people can take orally, Treanor notes. Researchers are genetically tweaking adenoviruses, widely used as vaccine carriers, to express the relevant influenza virus proteins. Such viruses can be administered in a tablet, for example. Then they replicate in the gut and stimulate a protective immune response in mucosal tissues that line the stomach and intestines.

A different needle-free option—one that uses an inactivated virus—is a device developed by PharmaJet to administer the vaccine Afluria. Approved by FDA in 2014 for most adults, a spring-powered, hand-held injector shoots the vaccine through the skin and into the muscle via a narrow, precise fluid stream with pressure that sometimes feels like the snap of a rubber band, says PharmaJet Chief Operating Officer Chris Cappello. Its distribution will expand from hundreds to thousands of locations during the 2017–18 flu season, he adds. 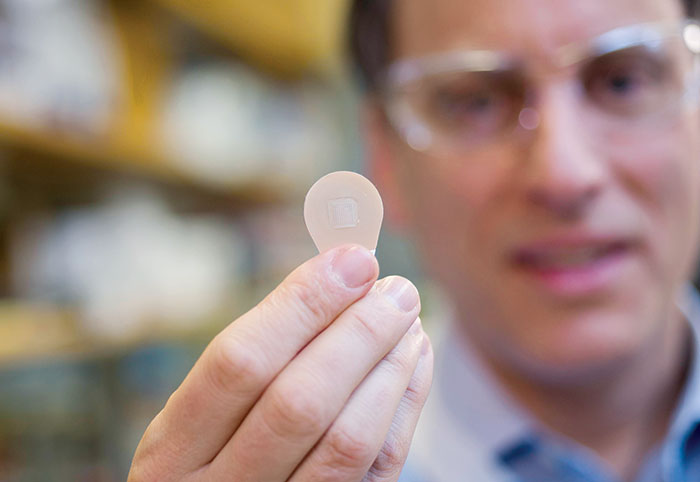 Patching up the vaccine

Another approach that could make vaccines easier to administer and potentially more effective is a move toward immunizations into skin, rather than muscle. FDA has approved one intradermal vaccine for the flu, Fluzone ID. It is still delivered via syringe, but with a 90% smaller needle, so it’s easier to administer and creates less waste. It offers comparable immunity to that of intramuscular vaccines. Skin offers a rich environment for generating an immune response, says Mark R. Prausnitz, a chemical engineer at Georgia Institute of Technology. Because this tissue already serves as a primary barrier between humans and all sorts of pathogens, skin is primed to generate a wider array of protective immune responses than those generated within the muscle.

Prausnitz has developed a small patch with microneedles to deliver inactivated virus into the skin. The dissolvable, cone-shaped microneedles—100 of them arranged in a 1-cm2 array—are made of a combination of sucrose and polyvinyl alcohol that encapsulates inactivated flu antigen. As the patch is applied with the press of a thumb, the conical needles penetrate the outer layer of the skin, and the backing clicks to indicate that the microneedles are in place. The microneedles settle into the skin and separate from the patch, turning into a soft gel as they further absorb. Leaving the patch on for 20 minutes is sufficient to deliver the vaccine.

One big advantage this less invasive system offers is that the patches don’t need to be kept cold; the microneedle material keeps the vaccine stable for at least two years at temperatures up to 40 °C, and the patch can be self-administered. This simple storage could make it much easier to reach people in underdeveloped areas. After obtaining promising results with the patch in animal testing, Prausnitz’s team in June reported results from a small clinical safety trial of 100 people (Lancet 2017, DOI: 10.1016/S0140-6736(17)30575-5). Adverse events were minor, with more itchiness among people who received the patch and more pain and soreness among people who received traditional injections.

Both the intramuscular vaccine and the patch contained the same dose of three viral strains: two influenza A strains and one influenza B strain. While the immune response to the A strains was comparable across delivery methods, those who received the patch vaccine had approximately double the immune response to the B strain compared with the intramuscular group. The microneedle patch “is a much easier, straightforward way to give vaccines in the skin, and so that may be able to open the door to harnessing the skin’s immunology to get better immune responses,” Prausnitz says.

Micron Biomedical, of which Prausnitz is cofounder and chief scientific officer, has licensed the technology to develop flu vaccines for further clinical testing. His lab, meanwhile, is developing this technology for other infectious disease threats in the developing world such as polio, measles, and rubella, an endeavor supported by the Bill & Melinda Gates Foundation.

Someday a flu vaccination could be as simple as applying a patch or swallowing a medicine. But as the ongoing situation with FluMist demonstrates, the influenza virus is an unpredictable foe. It could be a while before developers can demonstrate in large studies that these new flu vaccine strategies are effective, the University of Rochester’s Treanor says. “I don’t see any of these things as being really licensed for many years.”

Comments
Bill (November 2, 2017 3:08 AM)
Vaccines have many benefits. Unfortunately, one of them isn't preventing you from getting the disease the vaccine is supposed to immunize you against. If the vaccine business weren't so lucrative, it would have been banned a long time ago.
Reply »

Robert (November 8, 2017 12:22 PM)
And you have proof of this, Bill, that you can provide to those of us that understand that vaccines actually do work?
Reply »