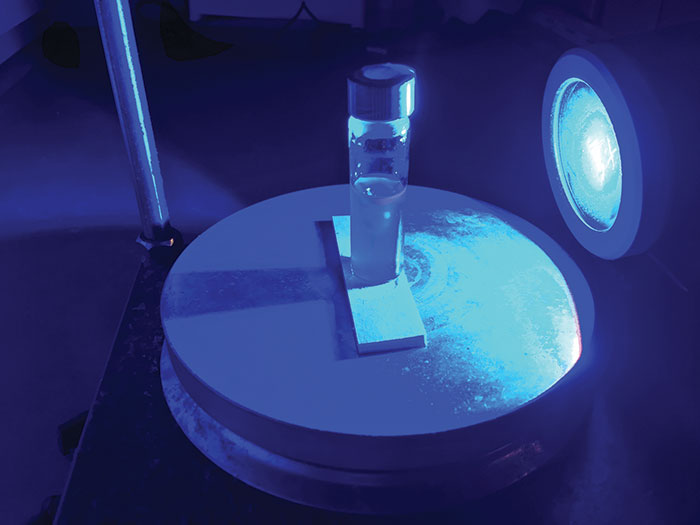 To follow the fate of a drug or a drug metabolite as it wends its way through the body, scientists will often label the compound by switching out a hydrogen atom for one of its heavier isotopes—deuterium or tritium. This molecular switcheroo sounds simple, but it can actually be a lot of work, requiring chemists to resynthesize a molecule so it has an atom, usually a halogen, or unsaturated bond where the heavy hydrogen can be swapped in or added. The process can take months.

Chemists at Princeton University and Merck & Co. have now come up with a way to switch hydrogen out for deuterium or tritium in a matter of moments. The reaction uses photoredox-mediated hydrogen-atom transfer to replace the hydrogens at C–H bonds adjacent to amines with deuterium or tritium from D2O or T2O (Science 2017, DOI: 10.1126/science.aap9674).

Amines are common motifs in biologically active molecules, and the chemists, led by Princeton’s David W. C. MacMillan, show the reaction works on myriad drug molecules (examples shown). For the tritiation reactions, the chemists also figured out how to make T2O, which isn’t commercially available, during the reaction using T2 gas and platinum oxide.

The new labeling methodology could “open the door to earlier and expanded use of isotopic labeling in drug discovery, significantly enhancing our ability to study drug candidates on a deeper level and across a range of applications,” says Jennifer Lafontaine, senior director of synthesis and analytical chemistry in Pfizer’s oncology medicinal chemistry group.

These pharmaceuticals were tritiated (indicated with a red dot) using a photoredox-catalyzed exchange reaction.

Ian Davies, a coauthor on the paper who recently moved from Merck to Princeton, points out that the reaction could also help chemists studying the biology of complex natural products. “You don’t have to resynthesize the natural product,” he explains. As long as chemists have isolated the molecule, this reaction can deuterate or tritiate it.

Paul Greenspan, senior director of discovery chemistry at Takeda Pharmaceuticals, says the work “provides yet another impressive example of the power and versatility of photoredox catalysis, which continues to surprise us with mild, controllable, and highly practical transformations that would have been previously unattainable.”

MacMillan’s lab has been working in photoredox catalysis for several years. He says that the idea for the isotopic labeling reaction came about when he was visiting Merck, and Davies had set up a meeting for him with the company’s isotopic labeling group. “I said, ‘Why am I meeting with these people? What’s the point?’ ” MacMillan recalls. Davies’s reply was: “I don’t know.” But he assured MacMillan that there was value to be found in the meeting between scientists who don’t often interact.

MacMillan says that only hours after the meeting chemists in his lab were running experiments to test whether photoredox chemistry could help with isotopic labeling. “By that evening we knew we were onto something pretty interesting,” he says.

Despite deuterium and tritium’s rich history in physical organic chemistry and biochemistry, the isotopes have been underused in recent decades, notes Jacob M. Hooker, a molecular imaging expert at Massachusetts General Hospital. MacMillan and Merck’s photoredox method “is likely to draw attention to and revitalize the field,” he says. “This will spark additional innovative methods that drive quantitative chemical biology and pharmacology once again.”

Comments
Richard (November 9, 2017 9:06 PM)
From personal experience with deuteration of biological compounds I believe that the major drawback is and will be the change in hydrogen-bonding of these labelling methods, e.g. for solubility or protein interaction, similar to fluorine chemistry. I believe we should invest much more into methodology for carbon-13 enrichment of the molecule's backbone structure, which has already shown some pretty impressive insights into the biosynthesis of natural products in microorganisms growing on enriched acetate.
Reply »