Titanium nitride probe records more neurons than ever before 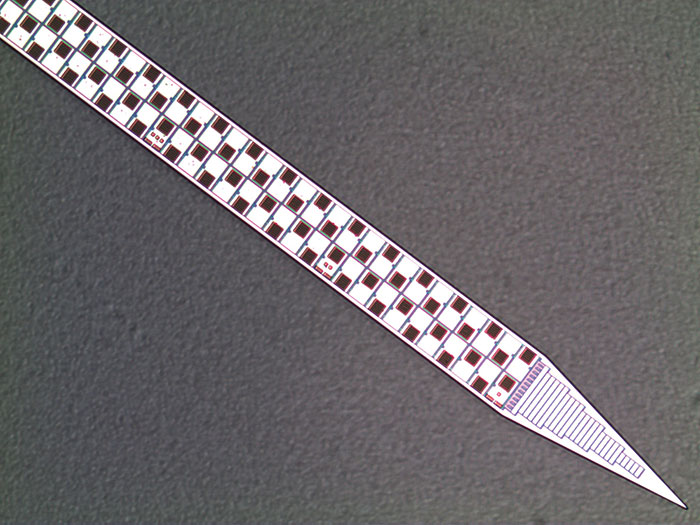 A probe that can simultaneously record electrical signals from hundreds of individual neurons could reveal how different areas of the brain work together to produce complex behaviors (Nature 2017, DOI:10.1038/nature24636).

The probe, called Neuropixels, is thinner than a human hair and carries 960 microscopic sensors made from a unique form of titanium nitride—one of several innovations in materials science that were crucial to creating the device.

Conventional probes used to record electrical signals within the brains of laboratory animals typically pick up readings from only small regions of the brain, making it difficult to understand how large networks of neurons are connected. These probes typically have just 32 sensors, which sets the upper limit on how many neurons they can record at 32.

In contrast, Neuropixels is 1cm long and covered in a checkerboard pattern of 12-µm-wide recording contacts, potentially spanning a mouse’s entire brain. It can simultaneously record electrical activity in 384 of these sensors and switch between sensors to home in on brain areas of interest. “For the first time in the world, this enables ‘systems neuroscience,’” says Barundeb Dutta, chief scientist at nanoelectronics company Imec, which was part of the large international consortium that developed the device.

Neuropixels’ cross section of 70 x 20 µm is also smaller than conventional probes, making it thin enough to avoid causing damage when inserted into the brains of living animals. Weighing just 250 mg, it can record signals from unrestrained animals, allowing neuroscientists to study a much wider range of natural behaviors for many weeks.

The probe was also designed for low-cost mass manufacture. For the recording contacts, Imec developed a nanoporous titanium nitride that is biocompatible and sensitive to the electrical signals from an individual neuron. Compared with previous neural probe contact materials such as gold, titanium nitride is much cheaper, and it’s easier to integrate into standard silicon-chip fabrication processes.

Not only can Neuropixels record more than 10 times as many neurons as previous probes, it should also be at least 10 times cheaper, Dutta says. The consortium hopes to begin selling Neuropixels next year for the same amount it costs to fabricate them. “It democratizes neuroscience,” Dutta says.

Scientists around the world are already testing about 400 Neuropixels prototypes. Preliminary experiments have used a pair of probes to record more than 700 individual neurons in an awake mouse, spanning five different brain structures responsible for tasks such as sensory input, motor control, and spatial memory. Other researchers are measuring the activity of roughly 1,000 neurons as a mouse forages for food.

Patrick Ruther at the University of Freiburg, who was not involved in the research, has worked on similar projects such as NeuroProbes and NeuroSeeker, which have demonstrated increasingly sophisticated neural probes over the past decade. He believes that it may eventually be possible to interpret the neural signals recorded by one of these next-generation devices and translate a person’s intention to move into action by a robotic prosthetic. “In the long run, I can imagine that devices like these could be used as interfaces between brain and machines,” Ruther says.

Neuroscience
Neuronlike electronics integrate with brain tissue without causing damage
Materials
Artificial Skin Transmits Signals To Neurons
Materials
Flexible Electronics Injected Into Mouse Brains
Share X
To send an e-mail to multiple recipients, separate e-mail addresses with a comma, semicolon, or both.
Title: Titanium nitride probe records more neurons than ever before
Author: Mark Peplow
Chemical & Engineering News will not share your email address with any other person or company.