The events leading to fires from decomposiing peroxides at the Arkema site in Crosby, Texas, are described in this CSB animation.
Credit: U.S. Chemical Safety Board

In light of the impact of Tropical Storm Harvey on an Arkema chemical plant and the greater Houston area, the U.S. Chemical Safety Board is urging companies, emergency planners, and regulators to quickly reassess the chemical industry’s preparedness for hurricanes and floods. The board, an independent federal investigator, made the recommendation Nov. 15 as part of an update of its ongoing investigation into the fires that occurred in late August at the Arkema facility in Crosby, Texas. 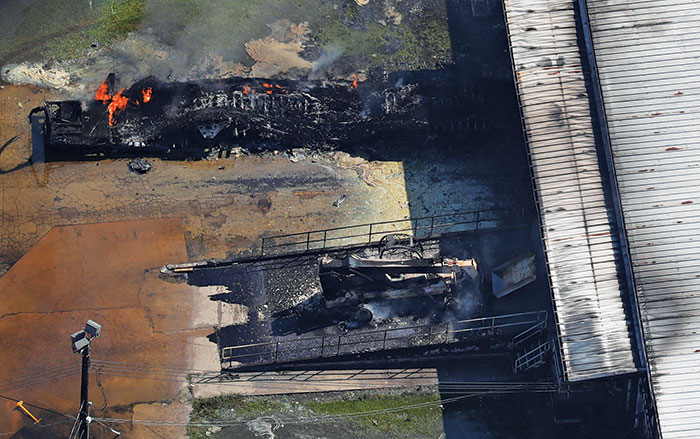 “Harvey shows that companies can’t rely on past experience” when it comes to emergency planning, says CSB investigator Mark Wingard. “More severe weather events are possible, and we need to be thinking about what can happen and how to prepare for it. Companies need to test past assumptions.” Arkema manufactures and uses organic peroxides, which must be refrigerated for stability, at the Crosby site. The plant lost primary electricity and its generators as it flooded because of Harvey. As its cold-storage warehouses lost power, the company shifted the peroxides to nine refrigerator truck trailers. But soon, three trailers caught fire and eventually Arkema officials deliberately burned the remaining trailers. The company considered neutralizing the peroxides, but it had 158,757 kg held in 15,000 individual containers, making such actions difficult, CSB investigator Wingard says. CSB officials say floods, high winds, and hurricanes are becoming more frequent and industry and regulators must be prepared. CSB will look at the adequacy of assumptions in current emergency preparedness requirements as well as approaches of different U.S. federal agencies and those of other countries as it prepares its report on Arkema, Wingard says. Arkema did emergency planning, CSB Chair Vanessa Allen Sutherland says, “but it wasn’t enough. We need to find out why and share it with other companies.” Sutherland says CSB intends to complete the investigation and issue its report before the next Atlantic hurricane season starts in June 2018 to help companies and emergency responders prepare.