During the 19th National Congress of the Communist Party of China that took place in Beijing last month, chemists throughout the country noted that three of their peers are now part of the 205-member Central Committee, one of the top ruling bodies of the Chinese Communist Party. All in all, 25 members of the Chinese Academy of Sciences or the Chinese Academy of Engineering are now members of the Central Committee, says Weihong Tan, a professor of chemistry at the University of Florida and Hunan University.

“Scientists in the Central Committee won’t be able to affect fundamental policies, but they will be a major part of the decision-making for science funding, or deciding how to tackle air pollution,” Tan says. “Scientists have definitely gained in influence in China in the past 25 years.”

In the U.S., chemists and other scientists have lamented for years their eroding influence on public policy and on the government. China appears to be going in the opposite direction. In a country where the public does not elect its representatives, more and more scientists are rising to top positions in the government. President Xi Jinping himself studied chemical engineering at Tsinghua University in the mid-1970s, in the waning days of the Cultural Revolution.

The three chemists who are now members of the Central Committee are Chunli Bai, Jianguo Hou, and Li-Jun Wan. They all pursued advanced studies at foreign universities when they were younger. Wan and Hou are newcomers to the committee, whereas Bai has served since 2012. They will all now serve on the committee until 2022.

They are well-known in Chinese and international scientific circles, and not only for their research. Bai, for instance, is a pioneer in the field of nanotechnology and president of the Chinese Academy of Sciences. Wan is chair of the influential All-China Federation of Returned Overseas Chinese and a professor at Beijing’s Institute of Chemistry. And Hou, a materials scientist who focused on nanotechnology, was president of Hefei’s University of Science & Technology of China from 2009 until 2015.

On an organizational chart of the Chinese government, the Central Committee sits near the very top, and it is the political body that makes key appointments, including the selection of China’s president and the members of the Politburo—the principal policy-making committee. Politburo members include some Central Committee members, governors, mayors of major cities, regional party secretaries, and most government ministers, says Willy Wo Lap Lam, a professor at the Centre for China Studies at the Chinese University of Hong Kong. 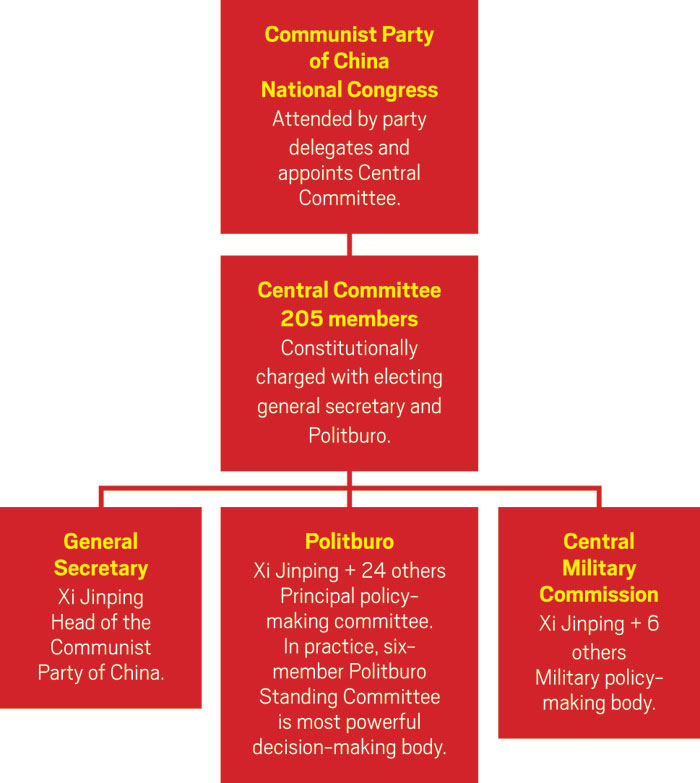 Tasked with selecting senior officials, including the country’s president, the Central Committee sits atop the Chinese Communist Party structure.

Nevertheless, scientists who are members of the Central Committee can influence Chinese scientific priorities and the country’s science budget, Lam adds. “Academics who managed to become Central Committee members are politically well connected,” he says. “They are informal advisers to policy-makers.”

Yi Zhun Zhu, dean of the School of Pharmacy at Macau University of Science & Technology and former dean of the School of Pharmacy at Fudan University in Shanghai, believes that scientists are selected as members of the Central Committee because top decision-makers want to hear their views. “Years ago, members of the Central Committee were not highly educated,” he says. “Today, the government wants China to be a creative and innovative society, so they want to hear from the scientists and artists who create.”

Members of the Central Committee—or their close relations—tend to also have high government positions, says Biao Yu, deputy director of Shanghai Institute of Organic Chemistry. Among several examples, he says, is the one of Chen Jining, the mayor of Beijing. The holder of a Ph.D. in civil engineering from Imperial College London, Chen was president of Tsinghua University from 2012 to 2015. In that position, his boss was the university’s party secretary Xi Chen, who was also one of the executive leaders of the Central Committee.

Chemist Hou is another academic who joined the Chinese government recently. In 2015, he was appointed deputy minister of science and technology. This summer, he became party secretary of the General Administration of Quality Supervision, Inspection & Quarantine, a ministry-level agency that, among other tasks, prevents contagious people from entering or leaving China.

Overall, Florida University’s Tan says, China tends to listen more to its scientists, and that will result in stronger Chinese science. “I expect this will lead to more international exchanges,” he says. “It’s all part of creating a more innovative society.”

Litigation
US EPA won’t appeal court ruling that nullified its science advisers policy
Chemical Regulation
Preservative butylparaben targeted for control in EU
Chemical Weapons
Tear gas and pepper spray: What protesters need to know
Share X
To send an e-mail to multiple recipients, separate e-mail addresses with a comma, semicolon, or both.
Title: Chemists gain influence in China
Author: Jean-François Tremblay
Chemical & Engineering News will not share your email address with any other person or company.