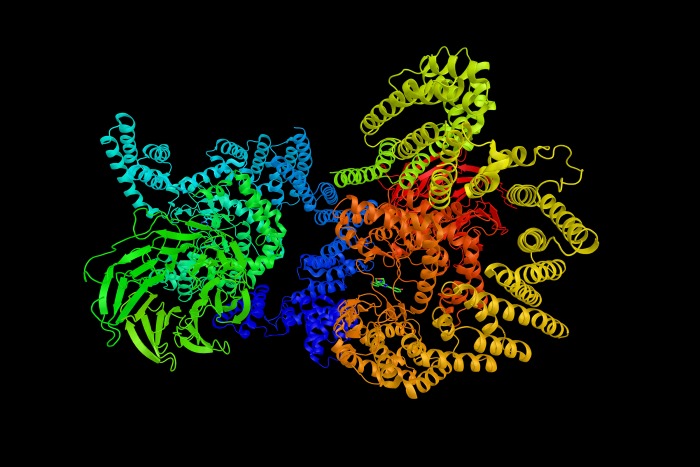 Credit: Shutterstock
The mechanistic target of rapamycin (mTOR) is an important node in many cell signaling pathways, and could be a new drug target for treating depression.

People with depression have to take currently available antidepressants for months before they start to get relief from their symptoms. But scientists are on the hunt for new, fast-acting antidepressants.

For example, ketamine can improve symptoms in a matter of hours, but comes with some undesirable side effects, such as hallucinations and out-of-body experiences. So researchers want to understand which cellular pathways ketamine turns on and off to find possible new antidepressant drug targets that don’t lead to acute psychiatric side effects.

Scientists at Yale University and Navitor Pharmaceuticals think they have a compound with potential. The molecule boosts activity of an important signaling hub in brain cells and rapidly alleviates symptoms of depression in rats. The team reported data on the molecule on Nov. 14 at the Society for Neuroscience annual meeting in Washington, D.C.

When ketamine binds to receptors on the surface of neurons, one of the downstream signaling protein complexes it activates is mTORC1. This protein complex is present in many cells in the body and regulates cell growth and metabolism in response to nutrient availability. One hallmark of depression is reduced mTORC1 activity in the brain, says Navitor CEO George P. Vlasuk, but finding a way to boost that activity has been difficult.

Navitor’s lead program focuses on developing new compounds to directly activate mTORC1 to treat a range of diseases. Their collaborators discovered a new way to turn up mTORC1 activity—a nutrient-sensing pathway mediated through a protein called sestrin2 (Science 2016, DOI: 10.1126/science.aab2674). The company then developed NV-5138, a small molecule that binds to sestrin2, which then releases its hold on mTORC1 and, as a result, activates the complex. Navitor’s patent for NV-5138 is still pending, so the structure has not yet been published.

Ronald S. Duman, of Yale University, led the effort to test the new compound as an antidepressant. In rats with depressionlike symptoms, an oral dose of NV-5138 rapidly penetrated the brain and, within one hour, activated mTORC1 in the prefrontal cortex, a brain region heavily affected in depression.

And, similar to ketamine, NV-5138 boosted the density and strength of connections between neurons in the prefrontal cortex. The small molecule relieved some symptoms of depression in rats, such as a lack of interest in a treat (sugar water), and the effects of a single dose lasted up to 7 days despite a short half-life of several hours.

The main novelty with NV-5138, according to Duman, is that it acts downstream of the receptors that ketamine binds to on nerve cells. This may circumvent some of the negative side effects caused by ketamine, he says.

“It sounds very promising,” comments Joseph R. Moskal, of Northwestern University and chief scientific officer at the biopharmaceutical company Aptinyx. He says that although the data are preliminary, the logic behind this target makes sense.

Lisa Monteggia, a neuroscientist at the University of Texas Southwestern Medical Center, points out that mTORC1 interacts with many cellular processes, so directly activating it could still trigger side effects.

Vlasuk agrees. “This is the first small molecule direct activator of mTORC1 that’s been described,” he says. “We want to know as much about it as we can.” The next step for Navitor scientists is to assess NV-5138’s safety and efficacy in humans, he says. The company plans to begin phase I trials in the first half of 2018.

Neuroscience
Ketamine is revolutionizing antidepressant research, but we still don’t know how it works
Biological Chemistry
Could a pill one day reverse some of the damage lead inflicts on the brain?
Pharmaceuticals
Ketamine metabolite could inspire fast-acting antidepressants
Share X
To send an e-mail to multiple recipients, separate e-mail addresses with a comma, semicolon, or both.
Title: New possible target for rapid antidepressants found
Author: Emma Hiolski
Chemical & Engineering News will not share your email address with any other person or company.

Comments
Frans van Dijen (November 22, 2017 11:02 AM)
Instead of chemicals:drugs, there are oher solutions as well, which often work as well:
- hug a pet, like rabbits, cats, dogs, horses
- start to run or to walk, especially outside
This promotes production of feel-good chemicals / drugs by the body.
Reply »

Adam Frankel (November 22, 2017 8:19 PM)
It's easy to be dismissive of such a finding when the US is inundated with drugs like antidepressants, and I agree with other comments that non-medication therapies are great. However, I find it exciting that mTORC1 can be activated by a new compound, and perhaps NV-5138 could represent a better alternative for those individuals who suffer from major depressive disorders (e.g., veterans).
Reply »

Alan B. White (November 22, 2017 9:39 PM)
As a parent of a mentally ill child I am very pleased to see researchers pursuing drug innovations such as described in this article. Proper treatment is so difficult given the slow acting responses to most drugs used in treating the mentally ill. It really complicates proper diagnosis. While I too think that exercise and hugs are of great help in dealing with ill people, drugs are at times the ONLY salvation for treating a seriously ill person and I would not put them down as do some.

Believe me I know from years of frustration. Most folks don't realize that serious brain research has only been conducted within the last twenty-five years or so. By the way, another great resource available for ill people AND their families is NAMI, the National Alliance on Mental Illness, a grassroots organization, with free help which has chapters across the country. It too can be a vital tool in treatment and recovery for families dealing with this problem.
Reply »