The Oct. 30, 2017, issue of C&EN includes an excellent Comment by Michael Mosher, chair of the ACS Committee on Nomenclature, Terminology & Symbols, focusing on the merits and advantages of “proper use of current nomenclature, terminology, and symbols” as “the key to improving chemistry education and practice” (page 33). I strongly recommend that ACS members read this article and take its guidance to heart. After all, nomenclature is part of the grammar of chemistry.

In the same issue of C&EN, however, two other articles misuse current (approved) nomenclature (pages 13 and 18). For complex structures, correct naming can be a real challenge, but the errors to which I refer involve perhaps the two simplest basic rules in organic chemical nomenclature: naming unbranched alkanes and placing locants in names.

Since the first international nomenclature conference in 1892, the internationally approved names for unbranched alkanes and derived primary alkyl groups have no prefix: hexane, hexyl; the prefix n- is unnecessary and unapproved, despite its rather widespread use. Since 1993, virtually a quarter century ago, International Union of Pure & Applied Chemistry usage has placed locants immediately before the portion of the name to which they apply: hex-3-ene, furan-2,5-dicarboxylic acid.

These specific errors are unlikely to raise safety issues such as [those] Mosher cites, but I have seen similar ones moderately often in C&EN. In the official organ of the ACS, they represent a cavalier attitude that is embarrassing and distracting, and undercutting to the thrust of Mosher’s article. I sincerely doubt that your editing would let nonchemical grammar errors such as proper case for pronouns and number agreement for subject and verb slip through. The final sentence of the article, about views expressed, might be paraphrased, “We have published this nice article, but we don’t take it to heart.” James G. Traynham Baton Rouge, La.

[+]Enlarge
Credit: Mediacolor's/Alamy Stock Photo
One metric ton of ore can yield as little as 2 g of gold. 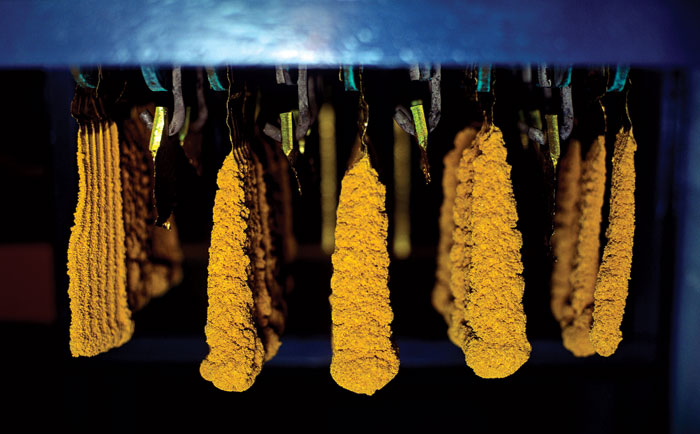 I enjoyed the recent article on the use of sodium cyanide to extract gold from ore (C&EN, Oct. 2, page 18). Little mention was made of other techniques to dissolve gold. An interesting method was reported in 2010 by W. Lin and coworkers at the Georgia Institute of Technology (Angew. Chem. Int. Ed. 2010, DOI: 10.1002/anie.201001244). This technique used a 3:1 mixture by volume of thionyl chloride and pyridine to dissolve gold. The authors refer to their reagent as “organic aqua regia.” The authors claim that they could dissolve gold at room temperature at the rate of 0.3 mol/m2 per hour. I wonder if anyone has reproduced these results. If so, it sounds like a good alternative method for extracting gold from the various ores that contain gold. Joseph A. Castellano San Jose, Calif.

The American Chemical Society’s 2016 IRS Form 990 is now available on the ACS website. To access the information, go to www.acs.org/acsirsform990. Please scroll toward the bottom of the page to access the 2016 form and related “Guide to Schedule J” for explanatory information regarding ACS executive compensation. If you have any access problems, please contact service@acs.org.

Environment
Letters
Environment
letters
Share X
To send an e-mail to multiple recipients, separate e-mail addresses with a comma, semicolon, or both.
Title: Reactions
Author:
Chemical & Engineering News will not share your email address with any other person or company.

Comments
Robert Buntrock (December 6, 2017 3:48 PM)
I agree with Dr. Traynham’s letter (C&EN, Nov. 27, 2017, p. 3) about the need for correct chemical nomenclature. However, I don’t agree with all of his conclusions about the use of nomenclature for unbranched alkanes and primary alkyl substituents. The redundancy of the n-prefix for these compounds and groups may not be necessary if one is dealing with pure compounds but that is not always the case. For example, the “hexane” often encountered is a roughly C6 naphtha cut from the refining process and if one is dealing with the unbranched isomers the n- should be used to dispel any confusion. As I illustrated in my paper “Documentation and Indexing of C4 compounds: Pathways and Pitfalls” (J. Chem. Inform. Comp. Sci., 1989, 29, p. 72-78), nomenclature for branched C4 compounds, especially polymers, gets very complicated. With more than one “approved” nomenclature (IUPAC, CAS 9CI), the ultimate compound descriptors are the CAS Registry Numbers. As pointed out in my article, more than 40 Registry Numbers plus some non-specific names are needed to comprehensively retrieve “polybutenes”.