What’s glass, and how are modern-day researchers enhancing its properties?

Easily tailored through chemistry, the vintage material plays a crucial role in applications old and new 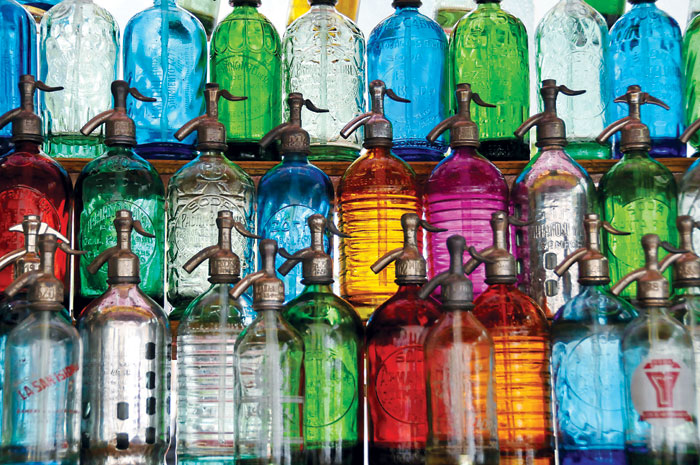 You’d think we would know everything there is to know about glass by now. It’s been around for thousands of years, and it’s practically everywhere: in the walls of high-rise commercial buildings, in the windows of houses, in the windshields of automobiles and airplanes. Then there’s fine crystal, cookware, bottles, jars, and yes, chemical glassware—just to mention a few other products made of glass.

Still, just this year, researchers at Corning debunked a popular urban legend about glass. The legend states that glass is a supercooled liquid and points to stained glass windows in medieval cathedrals as evidence. Because glass flows slowly over time, the legend goes, some of those windows end up thicker at the bottom than at the top. That just ain’t so. The researchers used modeling and measurements and determined that stained glass of the type found in Westminster Abbey actually flows a maximum of about 1 nm over a billion years (J. Am. Ceram. Soc. 2017, DOI: 10.1111/jace.15092). The viscosity of glass—actually an amorphous solid—is too high for humans to observe its flow during their time on Earth. The thicker window edges may simply be an artifact of medieval glass processing.

Why glass is still capturing the minds of scientists and innovators depends on whom you ask. Arun K. Varshneya, president of Saxon Glass Technologies, which specializes in strengthening glass for the pharmaceutical and other industries, ticks off a long list of properties that make the stuff so useful. Beyond being transparent, it also stands up to wind, rain, snow, intense sunlight, and large swings in temperature, he says. It’s also chemically resistant and recyclable, and many varieties of glass are relatively inexpensive.

Richard K. Brow, a materials scientist at Missouri University of Science & Technology, says he finds glass captivating aesthetically. Some 40 years after delving into glass research, Brow remains fascinated with the way the molten material flows and forms an enormous variety of shapes, from microscopic spheres and fibers to large sheets and plates. “Glass is so useful,” he adds, because “the composition can be tuned broadly to tailor its properties and performance for such a wide range of applications.”

[+]Enlarge
Credit: Titanas/Wikimedia Commons
Billions of portable electronic devices use a protective screen of Corning Gorilla Glass, which is strengthened via an ion-exchange process. 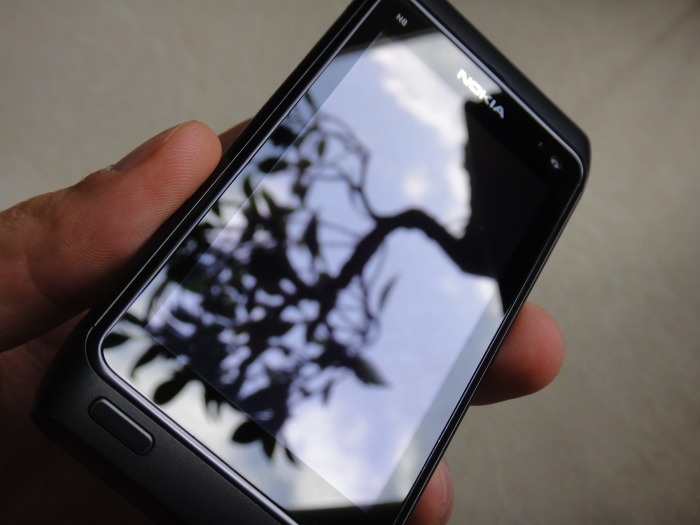 Credit: Titanas/Wikimedia Commons
Billions of portable electronic devices use a protective screen of Corning Gorilla Glass, which is strengthened via an ion-exchange process.

In addition to the common ones “in daily use by virtually all humanity,” some glass applications, such as fiber-optic cables for telecommunication and microscope and telescope lenses, “dramatically expand the frontiers of industry and science,” Robert Weisenburger Lipetz says. He’s the executive director of the Glass Manufacturing Industry Council, a nonprofit trade association. And glass isn’t just useful; it’s also big business. Lipetz says in the U.S. alone, glass manufacturing is estimated to be a $22.5 billion market.

People began using glass long before markets even existed. Early humans used obsidian—molten lava that cooled quickly—to make simple cutting tools and arrowheads. And although evidence from beads and other archaeological finds indicates that people figured out by 4,000 B.C.E. how to form glass coatings (glazes) by melting silica, the main component of sand, it would be another 2,500 years until ancient Mesopotamians got the hang of making hollow glass vessels, which they used for storing oils.

Around 200 B.C.E., Phoenicians developed the blowpipe and associated glass-blowing techniques, advances that historians say were the most important ones in the development of glass manufacturing. Those procedures enabled early glassmakers to shape molten glass into numerous useful and decorative products, which were easily transported and widely traded.

The main ingredients in glassmaking were widely available back then, and the recipe hasn’t changed much since that time. Sand—the source of silica (SiO2)—tops the list, typically coming in around 70% by weight. Other components include sodium carbonate (Na2CO3), which is known as soda ash, and limestone (CaCO3), which is plentiful in seashells.

Heating these materials together yields a molten mixture that cools to form a type of glass known today as soda-lime glass. That’s the most common and least expensive type, accounting for roughly 90% of all manufactured glass.

Through trial and error, glassmakers learned to modify the composition of glass to tune its properties for various applications. Soda-lime glass, for example, does not tolerate high temperatures or sudden changes in temperature.

Watch as our friends at ACS Reactions visit McFadden Art Glass in Baltimore to learn about what glass is made of and how glassblowing works.
Credit: ACS Reactions/YouTube

Adding a few percent of sodium borate to the melt incorporates boron oxide into the resulting glass. That material, a borosilicate glass, benefits from a lower coefficient of thermal expansion than soda-lime glass has, enabling the boron-containing form to withstand large and sudden temperature changes.

One particularly well-known borosilicate glass is Pyrex, the Corning family of heat-resistant bakeware, measuring cups, and other glass odds and ends for the kitchen. That line of commercial products, which recently celebrated its 100th anniversary, is also highly resistant to corrosive chemicals. The combination of heat resistance and resistance to damaging chemicals makes Pyrex flasks and pipelines well suited to laboratory and industrial use. Today’s Pyrex kitchen products are no longer made of borosilicate glass. Corning sold that division in 1998 and the new company switched to tempered soda-lime glass.

Lead glass is another variety of the familiar material that has been known for a long time. This form contains 20% or more lead oxide, boasts a high refractive index, and is relatively soft. Those properties make it sparkle, appear brilliant, and resist fracturing—all of which adds to the allure of fine goblets and other types of luxury lead glassware. Unfortunately, those beautiful goblets and decanters can pose health hazards due to lead leaching, according to the U.S. Food & Drug Administration.

Glass manufacturers have come up with many other glass formulations and continue to develop novel compositions and processing methods for custom applications. For example, Missouri-based Mo-Sci is developing a cottonlike bioactive borate glass for animal and human use that heals chronic skin ulcers and deep wounds. The nanofibrous material, which has antimicrobial properties, releases bioactive ions in the wound. The ions stimulate blood vessel growth and promote healing of soft and hard tissues.

Color blindness is another medical problem benefiting from a glass-based solution. Worldwide, millions of people are unable to distinguish various colors, especially reds from greens, under normal lighting conditions. Researchers at Enchroma designed stylish eyewear with custom-made lenses that filter select wavelengths from ambient light and help restore this component of vision to wearers who would otherwise be color-blind.

As useful as glass is, it would be even more useful if pieces of the material didn’t break easily. That shortcoming led Varshneya of Saxon Glass to develop an ion-exchange process to strengthen glass cartridges used in EpiPen epinephrine injectors, which are used for treating severe allergic reactions. The procedure replaces some of the sodium ions at the glass surface with larger potassium ions. The difference in ion size leads to compressive forces that toughen the surface by blocking the routes along which cracks could otherwise propagate. That treatment drastically reduced the number of EpiPen cartridges that broke during injection.

A related ion-exchange process lies at the heart of Corning’s Gorilla Glass, a chemically strengthened aluminosilicate material found in roughly 5 billion smartphones, tablets, and other portable electronic devices. Corning says a sheet of the newest version of the product less than 1 mm thick can survive 1.6-meter-high falls onto a rough surface 80% of the time. Manufacturers are now beginning to use the specialty glass for automobile windshields.

As industry scientists march forward in the development of new types of glass for tough portable electronics, data-dense computer hard drives, and high-capacity solid-state batteries, one thing’s for sure: Despite its advanced age, glass isn’t nearing retirement anytime soon.

UPDATE: This article was modified on November 22, 2017, to refresh its information and data.

Photonics
As telecom demands grow, optical fibers will need to level up
Inorganic Chemistry
What’s fiberglass, and how does the delicate material reinforce thousands of products?
Materials
Chemically strengthened glass finds a new application
Share X
To send an e-mail to multiple recipients, separate e-mail addresses with a comma, semicolon, or both.
Title: What’s glass, and how are modern-day researchers enhancing its properties?
Author: Mitch Jacoby
Chemical & Engineering News will not share your email address with any other person or company.

Comments
Cliff Burford (January 7, 2018 12:30 AM)
Very readable and interesting article, but disappointed that no information about laminated glasses or light-reactive glass coatings is included.
Reply »