When a bar rag just won’t cut it 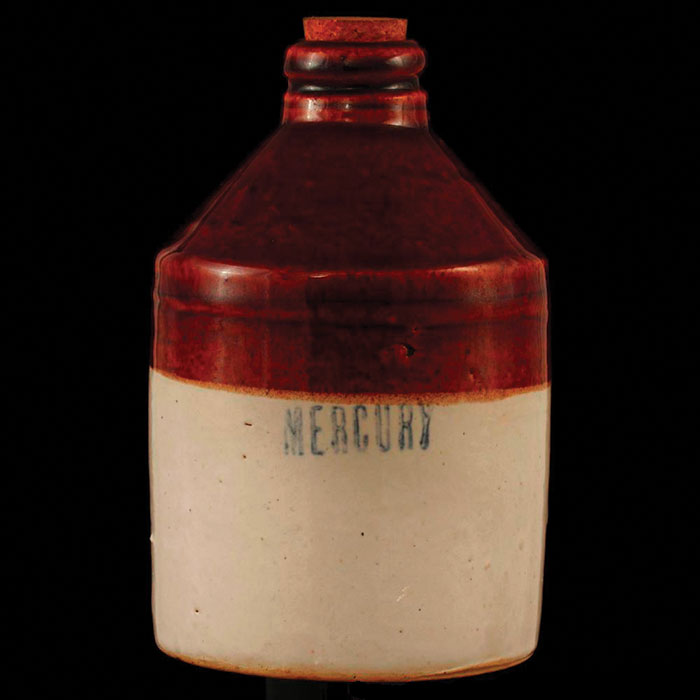 Credit: Theodore Gray/periodictable.com
Little brown jugs—like this one from Theodore Gray’s personal collection—are to be used as college football trophies, not mercury containers.

A person walks into a bar carrying a jar filled with more than 5 kg of mercury.

Although we wish we could follow that sentence with a punch line, this actually happened in Armstrong, Iowa, in 2012. And it gets worse. The jar spilled.

Thankfully, nobody was hurt, but it took Environmental Protection Agency contractors a week to fully clean the spill. Among the remediation highlights, workers had to remove the bar’s flooring and treat several appliances in one of the patron’s houses as hazardous waste, including the washer, dryer, and vacuum cleaner.

A group of public health officials earlier this year wrote about this and several other mercury spills, cluing the Newscripts gang into just how often people accidentally—and avoidably—expose themselves to this neurotoxic element (Morb. Mortal. Wkly. Rep. 2017, DOI: 10.15585/mmwr.mm6610a3). The authors counted more than 60 nonthermometer mercury spills in five states between 2012 and 2015. Corresponding author Ryan J. Wozniak tells us that he and his colleagues cataloged these cases to raise awareness about the liquid metal.

“We find that many people still have old jars of mercury in their garages, basements, and other storage areas,” says Wozniak, a toxicologist at the Wisconsin Department of Health Services. That’s in addition to other mercurial sources people may have in their houses, including compact fluorescent light bulbs, old boiler heating systems, and grandfather clocks with mercury pendulums. As elemental mercury is accessible and fascinating, spills like the Iowa case aren’t that surprising, Wozniak says. And it doesn’t help that people tend to underestimate its health effects, which typically come from chronic exposure.

Spills, however, can result in long-term exposure if the challenging and expensive cleanups aren’t handled properly. What’s more, spillage can release quicksilver into the environment, where it can accumulate and remain a threat, says Noelle Eckley Selin, who studies persistent pollutants at Massachusetts Institute of Technology.

For example, the element can build up in seafood as toxic methylmercury in some ecosystems. “Mercury doesn’t just go away,” she says. “Smaller spills certainly do add up.”

As for what motivates someone to bring 5 kg of the glittery substance into a bar, Wozniak doesn’t hazard a guess. But the polymath Theodore Gray—who gave Oliver Sacks about 4.5 kg of mercury on the famed neurologist’s 80th birthday—shares some insight on that front.

“I can totally see myself doing that,” he tells Newscripts of bringing a jug of mercury into a bar. “I don’t know why that guy did it, but if I did, it would be to let people experience the mind-blowing density of mercury.” Five kilos of mercury is less than two cups, he explains. For comparison, two cups of water has a mass of about 500 g.

Gray, however, knows how to handle his ooze. He stores mercury in thick-walled, rubber-coated, shatterproof reagent bottles, which are stored in secondary containers. “I might take 12 lbs of mercury into a bar, but I certainly wouldn’t take any chances with it spilling,” he says. “One should not fear the substance, only the ignorance that leads to its mishandling.”

Science Communication
Halloween chemistry demonstrations and costumes #spookychem
Environment
Army Sued Over Chemical In River
Environment
A Better Fate For Mercury?
Share X
To send an e-mail to multiple recipients, separate e-mail addresses with a comma, semicolon, or both.
Title: Surprise! It’s mercury
Author: Matt Davenport
Chemical & Engineering News will not share your email address with any other person or company.