[+]Enlarge
Credit: Robert Reisz
Collagen may have been found in this transversely cut piece of a 195 million-year-old dinosaur rib. 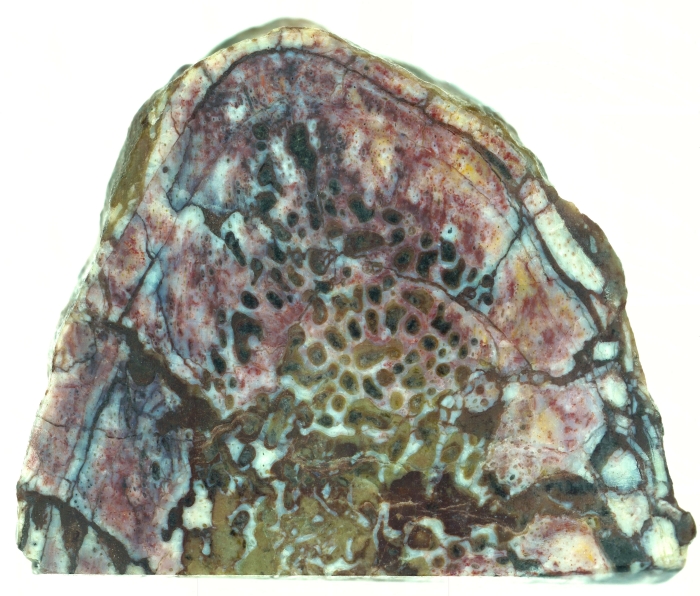 Credit: Robert Reisz
Collagen may have been found in this transversely cut piece of a 195 million-year-old dinosaur rib.

Until now, the oldest proteins ever found were collagen fragments from an 80 million-year old Brachylophosaurus canadensis dinosaur femur. A new finding claims to have beaten that record by more than 100 million years.

Robert R. Reisz, a paleontologist at the University of Toronto, and coworkers report that they have found collagen in tiny channels of a 195 million-year-old Lufengosaurus dinosaur rib fragment uncovered in Yunnan Province, China (Nat. Commun. 2017, DOI: 10.1038/ncomms14220).

But some scientists aren’t convinced. These skeptics question whether the analysis of the fossil actually points to collagen.

By analyzing the sample without dissolving the bone, “we can actually identify the source of the collagen in a very direct and precise manner,” Reisz says. “We’re finding that it’s within the vascular spaces of the bone where blood vessels would have been in the living animal.” The putative collagen is located in flat fragments along these vascular canals. Reisz thinks the collagen probably came from the walls of blood vessels rather than the bone itself.

Using Raman microscopy and transmission X-ray microscopy, the researchers also identified α-hematite crystals in the vascular canals. They suspect that this iron-containing mineral was derived from iron-carrying blood proteins such as hemoglobin, myoglobin, and lactoferrin. Reisz thinks the hematite might have played a critical role in preserving the collagen by sequestering it. 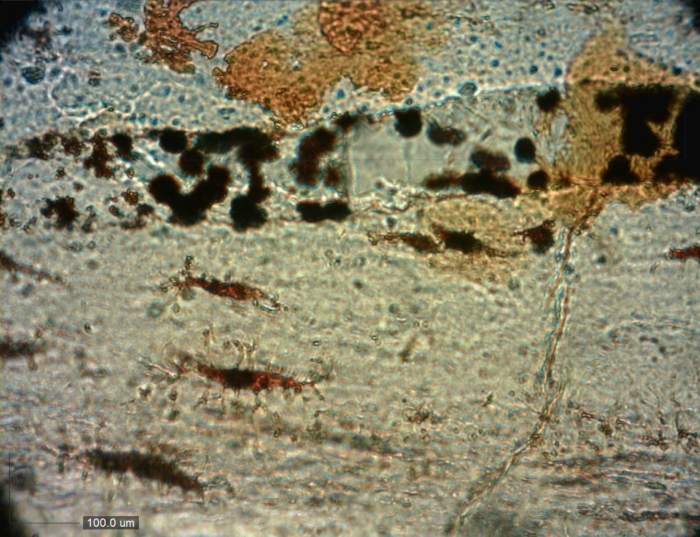 Credit: Robert Reisz
This slice cut along the length of a rib from a 195 million-year-old Lufengosaurus dinosaur shows the vascular canal with hematite particles (black spots).

But skeptics aren’t sure that the spectroscopic data conclusively identify collagen.

“Collagen is one of the best-studied biomolecules on the planet,” says Mary H. Schweitzer, a paleontologist at North Carolina State University. She previously reported finding traces of collagen in 80 million-year-old dinosaur bones (Science 2009, DOI: 10.1126/science.1165069) and recently reported additional evidence for that finding (J. Proteome Res. 2017, DOI: 10.1021/acs.jproteome.6b00873). “Collagens, particularly collagen type I, the protein that dominates in bone tissues, are easily recognizable.”

The spectra reported by Reisz’s team lack some of the characteristic bands of collagen, says Kathleen Gough, an IR imaging expert at the University of Manitoba. The IR spectrum of collagen was first reported more than 65 years ago, she notes. All proteins exhibit amide bands, which can be seen in the reported spectra of the fossil. But collagen has additional characteristic markers at 1,337; 1,284; 1,240; and 1,204 cm-1, which are hard to discern amid all the other absorptions from the fossil samples.

Analysis of the spectra, Gough says, is also hindered because the team recorded them in a way that can produce unwanted distortions in the absorption bands’ shapes and heights.

Also, Gough notes that the distinctive CH2 and CH3 bands identified in the fossil spectra are typical of lipid membranes or oils rather than of collagen, for which a characteristic CH2 band is not observed.

All of this, Gough says, points to the need for further analyses of the material, such as with polarized light and with IR spectroscopy with higher spatial resolution.

Matthew Collins, who studies ancient proteins at the University of Copenhagen and the University of York, “wants to believe it’s true.” But he also wishes Reisz’s team had used a wider variety of chemical analyses. “Everybody in this field uses their own favorite methods. We need to get lots of experts together and do a 360 analysis” with multiple analytical methods, he says.

Yao-Chang Lee, who led the synchrotron work at the National Synchrotron Radiation Research Center in Taiwan, says the spectra do show the characteristic collagen bands. In particular, the team saw the amide III band, which is found in collagen but not in general proteins. He also notes that because the fossil’s collagen is degraded, polarized light methods might not provide useful information. Also, Lee says, other analysis methods would require chemical treatments, which the team wanted to avoid so they wouldn’t introduce contaminants.

“We’re pushing the envelope,” Reisz says. “It’s a matter of pushing the boundaries of what kinds of organic signals we can get out of fossils.” Eventually, he thinks analysis methods could obtain sequence information for a more confident identification. “Within 10 years, we might be able to,” he says.

Analytical Chemistry
Radioactive plume detected above Europe
Spectroscopy
Chemistry in Pictures: The swimmers who do SERS
Mass Spectrometry
Human and plant metabolites and synthetic opioids added to US NIST Mass Spectral Library
Share X
To send an e-mail to multiple recipients, separate e-mail addresses with a comma, semicolon, or both.
Title: Collagen found in 195 million-year-old dinosaur bone, perhaps
Author: Celia Henry Arnaud
Chemical & Engineering News will not share your email address with any other person or company.