With its plant up and running, Canadian firm aims to conquer commodity petrochemicals with fermentation-made succinic acid 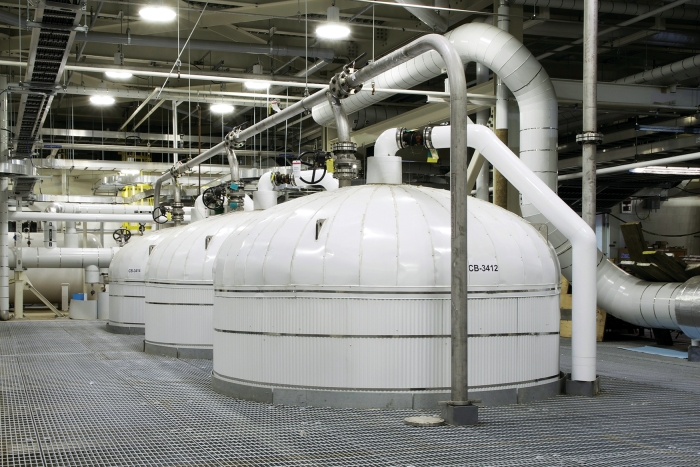 No one can say what the hardest task in industrial chemistry is, but developing a biobased route to an obscure chemical, running the process at large scale, and getting the exotic molecule to compete with entrenched petrochemicals is as good a guess as any.

This is exactly what BioAmber is attempting. The company has a gleaming new plant in Sarnia, Ontario, that can crank out more succinic acid than any other facility in the world. It has real customers putting the building block chemical to use in a variety of specialty applications. 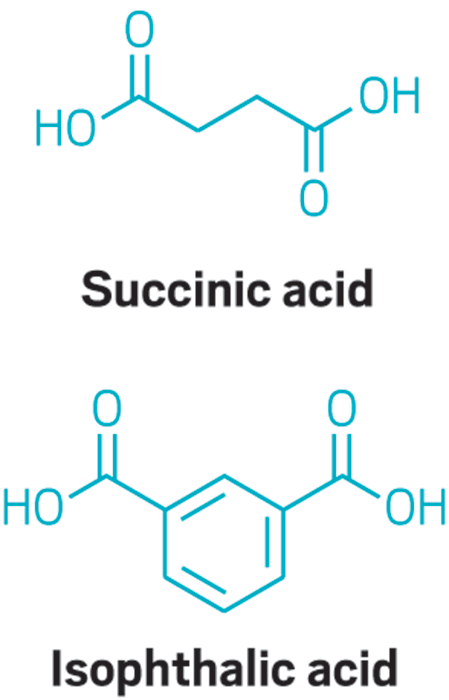 Now BioAmber is aiming higher. The firm is beginning to cultivate a market for the chemical in polyester for beverage containers, an application that could gobble up all the succinic acid it can send from its loading docks. But it will be a tough business to break into.

BioAmber is a relatively old hand in the new field of biobased succinic acid. Before it opened the Sarnia plant in late 2015 with partner Mitsui & Co., it ran a demonstration unit in France for about five years. The new facility uses a yeast-based fermentation process licensed from Cargill. The original one was based on bacteria.

The Sarnia plant can make 30,000 metric tons of succinic acid per year. BioAmber claims its process is cheaper than the petrochemical route, provided oil is more than $30 per barrel.

The existing market for synthetic succinic acid is modest by petrochemical standards—around 50,000 metric tons per year. It is served by a handful of suppliers, including Israel’s Gadiv Petrochemical Industries, the Japanese chemical producers Kawasaki Kasei and Nippon Shokubai, and a few Chinese firms.

But several other biobased chemical firms, seizing on the potential of the four-carbon diacid as a building block, have plunged into the market with processes of their own.

In 2013, Myriant started a succinic acid plant in Louisiana that is half as big as BioAmber’s Reverdia, a joint venture between DSM and Roquette, that opened a 10,000-metric-ton plant in Italy in 2012. And a partnership between BASF and Corbion called Succinity commissioned a plant in Spain in 2014. It is also 10,000 metric tons.

BioAmber probably has more sales than the competition. Open for a little more than a year, its plant is already running at 40% of capacity. According to Christopher Ellen, BioAmber’s vice president of sales, the single largest outlet so far is polybutylene succinate (PBS).

PBS is a compostable polyester made from succinic acid and butanediol. It has properties similar to polyolefins and may be suited to packaging. Plants making the new polymer are cropping up. BioAmber has a contract to supply one of them, a Thai joint venture between PTT and Mitsubishi Chemical.

Ellen says other uses for succinic acid include corrosion inhibitors in formulations such as engine coolants; personal care products, in which esters of the acid can act as an emollient; and food additives. In the latter application, succinic acid imparts the soy-like flavor known as umami.

But the potential application dwarfing them all is as a raw material for polyethylene terephthalate (PET) copolymers used in beverage containers.

PET is made from a polycondensation reaction of purified terephthalic acid (PTA) and ethylene glycol. Companies that make resins for soft-drink bottles substitute about 2% by weight of isophthalic acid (IPA) for PTA. This substitution makes the polymer more irregular, reducing its crystallinity for clearer final plastic goods. IPA also improves the resin’s barrier properties.

According to Ellen, succinic acid can substitute for IPA, at a similar price and at a 30% lower level. Renewability is another advantage, he says. “Our yeast technology has a near-zero carbon footprint. It is a significant reduction over an ingredient such as isophthalic acid, which is made from petrochemicals,” he says.

The beverage industry is keenly interested in making bottles from renewable resources. Coca-Cola has famously been bottling some of its drinks in PlantBottle packaging, made with biobased ethylene glycol, for years. It is working with partners such as Avantium on alternatives to petrochemical PTA, hoping for an entirely renewable bottle.

“We can’t name names, but we definitely had conversations with the leading packaging companies in the world,” Ellen says.

The potential is huge. The world uses about 30 million metric tons of PET each year. A sliver of that would require all the succinic acid that BioAmber, and everybody else, is currently making.

Victor Oh, lead analyst for biobased materials and chemicals intelligence at Lux Research, thinks that kind of an impact is a stretch. “To me it doesn’t seem like a strong enough value proposition—where downstream converters would be willing to use succinic acid just because it is going to be less material use,” he says. At best, Oh notes, the savings would amount to less than 1% of the cost of the bottle.

IPA is also a known quantity. “There is a lot of risk to moving to a different chemical at such a large scale,” he says. “It is not as simple as a drop-in replacement.”

The succinic acid industry is already familiar with this risk. Oh points out that the chemical is being tried as an alternative to adipic acid in polyurethane for the foams found in footwear. So far, he says, the new foams haven’t performed as well.

Oh concedes that angling for the PET market, with its high-volume potential, “makes sense as a business strategy for BioAmber.”

BioAmber is confident enough in its prospects for this and other markets that it is already planning more capacity. The company has an agreement with South Korea’s CJ CheilJedang to produce succinic acid at an amino acid plant in China. The plant is set to open in 2018 with 36,000 metric tons of capacity.

Roy McDowall, who runs strategy for BioAmber, says the infrastructure of the Chinese plant is “virtually identical” to that of the Sarnia facility. “It’s like we have the KFC recipe and we’re going into a Popeye’s and taking over,” he says.

Later, BioAmber intends to build a plant with seven times the succinic acid capacity of its current plant. Two-thirds of the output would go toward making butanediol and tetrahydrofuran, large-volume chemicals used in products such as polybutylene terephthalate and spandex fibers. BioAmber aims to secure a $360 million loan guarantee from the U.S. government should it build the plant in the U.S.

In such dog-eat-dog commodity markets, biobased succinic acid would need to compete on cost alone. BioAmber believes it can. So far, the company has demonstrated only that it is able to take some market share away from synthetic succinic acid. Success in the PET market would be a good second step.