Dispute over the legal rights to an anticancer agent continues

[+]Enlarge
The misassigned ONC201 structure (top) shows three rings in a linear conformation, while the correct structure has one of those three rings out of line with the other two (bottom). 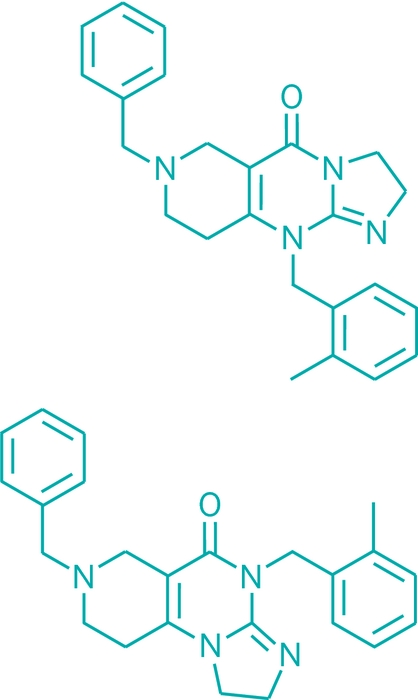 The misassigned ONC201 structure (top) shows three rings in a linear conformation, while the correct structure has one of those three rings out of line with the other two (bottom).

In 2014, Kim Janda of Scripps Research Institute California discovered that ONC201, a drug candidate under development at Oncoceutics, had been patented with an incorrect chemical structure. Scripps applied for a new patent on the compound with the correct structure and licensed it to another company, Sorrento Therapeutics.

On Jan. 31 of this year, the Patent & Trademark Office reissued Oncoceutics’s first ONC201 anticancer patent with a corrected chemical structure.

But this doesn’t mean the dispute is over. Janda argues that Scripps’s application for a composition-of-matter patent, which would grant rights to the molecule itself, would take precedence over Oncoceutics’s method-of-treatment patent, which grants rights to the molecule’s applications. In such cases, a company can’t legally profit from the use of a patent-protected substance without licensing it from its owner. Scripps’s patent is still under review.

“This is an interesting saga, and it would seem freighted with money and emotion,” says intellectual property attorney Kendrew H. Colton of Fitch, Even, Tabin & Flannery LLP in Washington, D.C.

The story of ONC201’s incorrect structure started in 1973, when pharmaceutical company Boehringer Ingelheim obtained a now-expired German patent on the compound, then called TIC10. The patent showed a structure with three central rings fused linearly. But the patent’s chemical recipe for making TIC10 produced a compound with one of the rings at an angle to the other two. The National Cancer Institute later included TIC10 and its incorrect linear structure in a compound database.

A Pennsylvania State University group found TIC10 in the database and discovered that the agent, synthesized using the patent’s recipe to produce the nonlinear structure, had potent anticancer activity. Penn State patented TIC10 with the misassigned structure and licensed it to Oncoceutics, which renamed it ONC201. Janda then found the structural error, and Scripps applied for a new patent, sparking the current dispute.

Oncoceutics has licenses to six ONC201-related patents. Five were issued in time to include the correct structure. The patent just reissued, the first in the series, was the only one with the wrong structure.

Oncoceutics chief development officer Martin Stogniew replies that company officials “do not see any route for a valid composition-of-matter patent for the ONC201 structure” for Scripps because the molecule “was synthesized and disclosed in 1973” and the first ONC201 patent preceded Janda’s finding.

In 2014, patent attorneys told C&EN that Scripps’s composition-of-matter patent could run into trouble because the institution had applied for it after others had made the critical discovery that ONC201 has anticancer activity, and because Penn State Research Foundation, the method-of-treatment patent holder, could have determined the structure correctly if it had realized it was wrong.

As the legal battle continues, Oncoceutics has been moving ahead with testing ONC201 in six Phase I and Phase II trials against solid tumors, multiple myeloma, non-Hodgkin lymphoma, acute leukemia, and glioblastoma. The company is also developing two ONC201 analogs.

Colton points out that in 2015 the U.S. Court of Appeals for the Federal Circuit upheld a patent with a corrected chemical structure. But if the Scripps patent is approved, he notes, Oncoceutics might be subject to Scripps’s composition-of-matter rights.

Business
Merck to pay Gilead’s lawyer fees
Business
Merck wins patent case against Gilead
Business
Gilead charges Merck attorney with lying
Share X
To send an e-mail to multiple recipients, separate e-mail addresses with a comma, semicolon, or both.
Title: Dispute over the legal rights to an anticancer agent continues
Author: Stu Borman
Chemical & Engineering News will not share your email address with any other person or company.

Comments
xyz (February 9, 2017 3:15 AM)
Dear CCN,
Thanks for bringing such failure of research.
Actually research is being done for the benefit of mankind.
The dispute doesn't come into picture, patient should be treated with the novel medicine. Only dispute over which company will Mfg the drug isn't the issue.
That means nobody other than these companies will mfg the drug etc. anybody in the world can mfg and sale it to the patient. If the patient himself is able to do it, it's good, if not he/she has to purchase form somebody.
The life of the cancer patient should be saved as the motto of research is to save the mankind.
Reply »

Federico -Maria Arcamone (February 10, 2017 7:09 AM)
There should be no doubt that the invention must be attribute to the first applicant who described the compond on the basis of the method for its preparation and discovered its properties. The method was unequivocal as it has provided the same potentially useful substance in other laboratories. The attribution of an incorrect structure should non affect the rights of the first inventor.
Reply »