Pitcher plant potties for tree shrews on the go 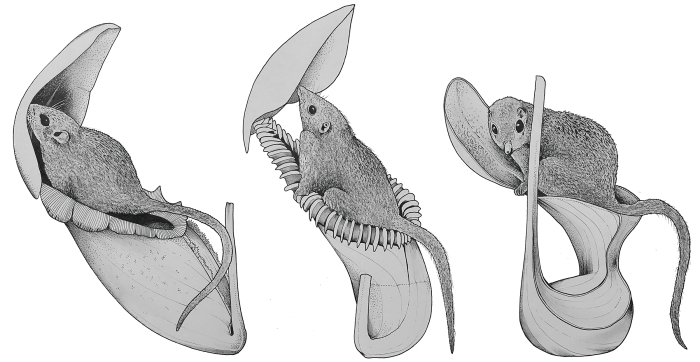 Carnivorous plants derive key nutrients by beckoning, trapping, and digesting insects. One class of these plants, pitcher plants, typically ensnares its prey in a slippery, inescapable, pitcher-shaped leaf full of sticky digestive fluid. But for at least three species of Nepenthes pitcher plants found in northern Borneo, the pitcher acts more like a bowl—specifically, a toilet bowl.

In the fog-enshrouded mountain forests where these plants grow, insects are relatively scarce compared with other pitcher plant habitats such as lowland swamps. So the mountain-dwelling plants have repurposed their pitchers as potties, luring mouselike tree shrews, Tupaia montana, with tasty secretions. While licking the plants’ upper rims, the shrews perch with their derrieres hung over the bowl. Some of the shrews then defecate into the pitcher, giving the plants a source of needed nitrogen.

Carnivorous plant specialist and illustrator Chris Thorogood of the Oxford University Botanic Garden posted the drawings shown here on Twitter recently, sparking discussion. Much is still unknown about the plant-shrew relationship, but Twitter commenters wondered whether the liquid might prove to have laxative properties to help ensure that snack-tamed shrews make a deposit, although Thorogood cautions that there’s no evidence for such fecal facilitation.

The shrews aren’t the only animals drawn to such pit stops. One Bornean bat species, Kerivoula hardwickii, roosts in another Nepenthes pitcher that is shaped to reflect the bat’s echolocation sounds. The bat leaves its guano in exchange for the resting spot (Curr. Biol. 2015, DOI: 10.1016/j.cub/2015.05.054). 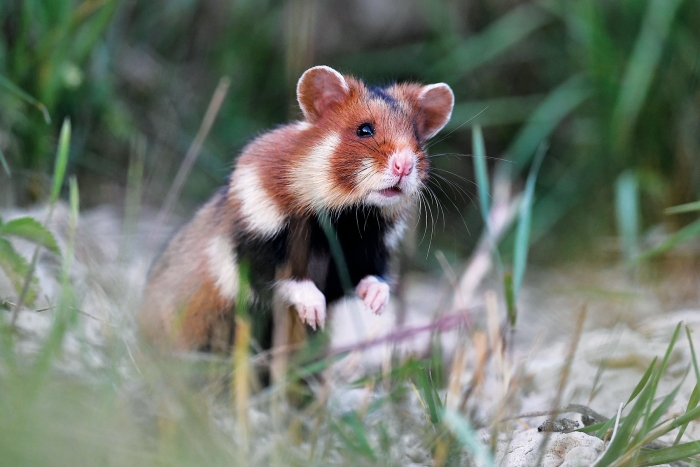 While tree shrews donate their excess nutrients, another little critter may be critically lacking in one, turning its mothers into cannibals.

In France, endangered wild hamsters, Cricetus cricetus, face increasingly homogeneous diets as they are surrounded by monoculture crops. Populations of the hamsters have declined by 94%, leaving researchers to look for causes and strategies for boosting populations.

In lab studies, Mathilde L. Tissier, Caroline Habold, and colleagues at the University of Strasbourg and France’s National Center for Scientific Research found that a corn-based diet results in mothers eating their young—a considerable obstacle to a species’ survival. Only 5% of pups from mothers fed corn diets survived until weaning, compared with 80% of pups from mothers fed wheat (Proc. R. Soc. B 2017, DOI: 10.1098/rspb.2016.2168). The researchers tied the behavior to a vitamin B-3, or niacin, deficiency. The nutrient-deficient mothers did not give birth in the nest and piled the babies on top of their food stockpiles, the team reports.

The hamsters had all the hallmarks of a vitamin B-3 deficiency: swollen tongue, thick blood, and disturbed behavior, according to a story in the Guardian about the work. The deficiency is well-known: Since the 1700s, at least 2 million to 3 million people in Europe and North America have died of this vitamin deficiency, the researchers say. Supplementing corn-fed mother hamsters’ diets with vitamin B-3 increased the number of pups that survived to weaning, the team found.