Rechargeable zinc-air batteries are going mainstream, but other metal-air chemistries will have to wait awhile 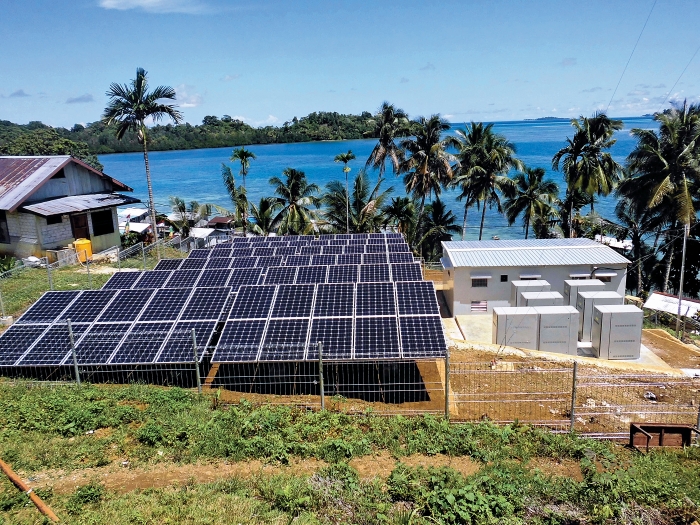 Last year, zinc-air battery start-up Fluidic Energy installed backup batteries for an array of solar panels in Welay Selatan, a tiny village on the Indonesian island of Alor. The location is remote, a 77-hour drive from Jakarta, including intermittent ferry voyages. The new solar power setup can bring electricity to 52 homes not currently connected to the grid.

The scene isn’t unique. So far, the Scottsdale, Ariz., firm has deployed 22 MWh of battery storage for 96 rural solar electrification projects on some of the Indonesian archipelago’s remoter islands, providing power to 110,000 people. The company signed an agreement with the Indonesian government to provide backup power for a total of 1.2 million inhabitants.

Ramkumar Krishnan, Fluidic’s chief technology officer, says many people from the world’s most underdeveloped regions are getting power for the first time from the sun, photovoltaic cells, and batteries locally rather than waiting for long-distance transmission lines to reach them from coal-fired power plants. “It is very similar to what happened in the telecom industry, where essentially all of the people in those regions skipped land lines and went to mobile communication,” he says. 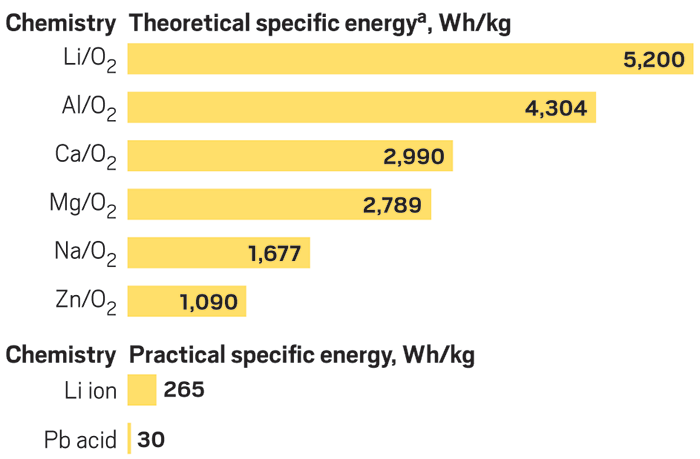 It is also a demonstration of the real-world potential of rechargeable metal-air batteries. The current state-of-the-art technology, the Li-ion battery, brought the world portable electronics and is powering the modest fleet of electric vehicles on the road. But the limitations of Li-ion batteries may make them insufficient to provide the energy storage needed to wean the world off fossil fuels.

Metal-air batteries, in which oxygen from the atmosphere reacts with metals to generate power, may be the next-generation battery technology the world needs. Li-air and Na-air batteries have energy density potential far beyond that of Li-ion. This could lead to increased success of electric vehicles.

Other chemistries, such as Fluidic’s zinc-air batteries, made of inexpensive raw materials, may prove to be the answer for stationary storage. The batteries could allow people to use renewable energy when the sun isn’t shining or the wind is calm.

Fluidic is perhaps the most commercially advanced rechargeable metal-air battery developer. The firm sprang up in 2006 from the laboratories of Cody Friesen, a materials science associate professor at Arizona State University. Since then, it has raised nearly $200 million, with backing from investors including the venture capital firm TN2, equipment maker Caterpillar, International Finance Corp., and Asia Climate Partners. Fluidic has 100,000 batteries in the field already, and it aims to bring reliable power to 100 million people worldwide by 2025.

Single-use zinc-air batteries have been around for decades and are the battery of choice for hearing aids. These aqueous alkaline batteries use zinc as their anode material. At their cathodes, water and oxygen form hydroxide ions, which react with zinc to make zinc oxide, releasing electrons in the process. As in all batteries, the electrons flow from the anode through the circuit—powering the device—and return to the cathode.

Fluidic’s Krishnan says the same chemistry underpins its batteries. The challenge was making it work in both directions to create a rechargeable battery. The biggest obstacle, he says, is that metal-air batteries form dendrites on the metal anode. The dendrites grow like icicles with each charge and can eventually short-circuit the cell.

The company solved this problem in three ways. One was to use ionic liquids as additives in the aqueous electrolyte to help suppress dendrite formation. The company also came up with a scaffold electrode design that promotes bottom-up growth of the zinc anode. Additionally, electronic controls preferentially deposit zinc where it needs to be.

[+]Enlarge
Credit: C&EN
Li-air batteries tap into the reaction between O2 and Li. 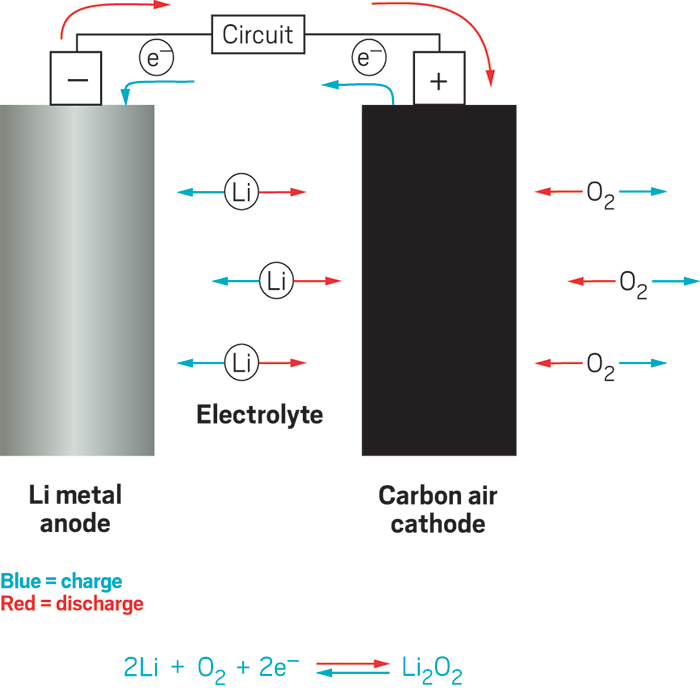 Credit: C&EN
Li-air batteries tap into the reaction between O2 and Li.

A few advantages make the batteries perfect for competing with lead-acid batteries and diesel generators for rural electrification and backup power for telecom networks. The electrode raw material cost of zinc is cheap, at $1.00 per kWh, versus $6.00 for Pb-acid and $17 for Li-ion. Air is free. The batteries also are safe, give off no emissions, and can be remotely monitored.

Fluidic is getting 35 Wh/kg from its Zn-air batteries, which exceeds the capabilities of Pb-acid. It aims to improve this to 100 Wh/kg in the next two to three years.

But for electric vehicles, Li-air batteries may offer the greatest potential because they can store the most energy in the smallest space. They generate power in a very different way than their Li-ion cousins do.

Common Li-ion batteries use carbon intercalated with lithium as the anode, lithium cobalt oxide as the cathode, and an electrolyte of lithium hexafluorophosphate dissolved in an organic carbonate solvent. When the battery discharges, Li ions migrate from anode to cathode through the electrolyte. The operation reverses when the battery is charging.

Li-air batteries use Li metal as the anode. The active material of the cathode is oxygen, which enters the battery cell via a porous carbon substrate. When the battery is discharged, the Li ions migrate through the electrolyte and react with the oxygen at the cathode, forming lithium peroxide (Li2O2). Charging the battery breaks down the Li2O2. Li is plated again on the anode, and the oxygen is released.

Li-ion batteries on the market today can store 265 Wh/kg, according to K. M. Abraham, principal of the battery consulting firm E-KEM Sciences and a professor at Northeastern University. With that technology, a Chevy Bolt can go 383 km on a single charge. The upcoming Tesla Model 3 travels 346 km. But car companies and consumers want at least double that range, which would require more energy than traditional Li-ion batteries can even theoretically hold.

Working Li-air batteries would be a big improvement. They can theoretically store 5,200 Wh/kg, about 20 times as much as traditional Li-ion cells. Abraham, who published the first patent for a nonaqueous Li-air cell in the 1990s, predicts practical cells would likely have a capacity of 30 to 50% of the theoretical value, accounting for the weight of components such as the electrolyte, current collectors, and packaging materials.

Li-air batteries would be so prodigious for a few reasons. Li is more densely packed in the metal anode than it is in the intercalated carbon of the Li-ion cell. Li is a lightweight metal to boot. Moreover, Abraham says, the reduction of the oxygen to form Li2O2 involves more electrons than does the cathode reaction for Li-ion batteries and thus yields more electricity.

Ji-Guang (Jason) Zhang, a laboratory fellow at Pacific Northwest National Laboratory, points to another advantage. “We could take oxygen from the ambient air,” he says.

Never the less, technologists have to overcome a number of obstacles before they can make real-world Li-air batteries.

For example, Zhang says finding battery materials that can stand up to oxygen is tricky. Early models suffered from electrolytes that degenerated and cathodes that lost conductivity after reacting with oxygen.

Abraham says potential solutions to these problems include the use of catalysts and improved cathode materials together with advanced electrolytes.

Using ambient air for the battery brings even more problematic molecules into the mix, Zhang says. Carbon dioxide reacts with lithium to form lithium carbonate. And Li is highly reactive with water. Most batteries in labs today run on pure oxygen.

Future cars could have air purification equipment as part of the battery system, but that adds bulk. A membrane on the cathode to allow only oxygen to enter would be ideal, Zhang says. “But that kind of membrane still doesn’t exist,” he notes.

Researchers are pressing on despite the challenges. Perhaps the most famous effort is IBM’s. The company launched its Battery 500 program in 2009. The name derives from the company’s goal to develop a battery that can power a car for 500 miles (800 km) on a single charge.

In 2012, the company signed on Japanese chemical firms Asahi Kasei to work on membranes and Central Glass to work on electrolytes for air batteries. Since then, however, IBM has released few official pronouncements about the program, though the company says it is still active.

PNNL’s Zhang says with all the challenges, he doesn’t see practical applications for rechargeable Li-air batteries within the next 15 to 20 years. In fact, a technology other than Li-air is the focus of PNNL’s consortium, also called Battery 500, which aims for a 500 Wh/kg battery. The Li-metal batteries that PNNL is working on has cathodes made of lithium nickel manganese cobalt oxide or sulfur.

Li and Zn aren’t the only chemistries for metal-air batteries. For example, researchers have been experimenting with Na-air batteries, which are potentially appealing because Na is plentiful. In 2012, BASF researchers cowrote a paper describing a rechargeable Na-oxygen cell that generated NaO2 at the cathode(Nat. Mater. DOI:10.1038/nmat3486).

Abraham says metallic Na might offer better recharge efficiency than Li, but he notes that its high reactivity with water—it explodes when it is thrown into a pond, for instance—would pose a challenge.

The Israeli start-up Phinergy is developing a battery from the most common metal in Earth’s crust, aluminum. Its Al-air battery isn’t rechargeable, however. The Al anode plates are converted into aluminum hydroxide as the battery discharges. The plates are replaced as they are depleted.

The company is eyeing applications such as secondary batteries for electric vehicles. Phinergy says its batteries, which pack 400 Wh/kg, can extend range by 1,600 km. The company is partnering with Al firm Arconic, which is apparently keen on a technology that consumes Al like fuel.

E-KEM’s Abraham thinks a similar scheme might work for Li-air batteries should they prove too difficult to recharge anytime soon. Lithium would essentially be used as fuel, with waste Li2O2 recycled outside the vehicle.

To tap into the storage power of Li metal, the world may need to take such measures if it wants better electric vehicles and greener electricity. Abraham says: “If you look at the periodic table, you don’t have many options.”

Comments
Sueli S. Buttarello (February 28, 2017 1:09 PM)
I would like to know if a nickel battery would be more eficiente than zinc.
Reply »