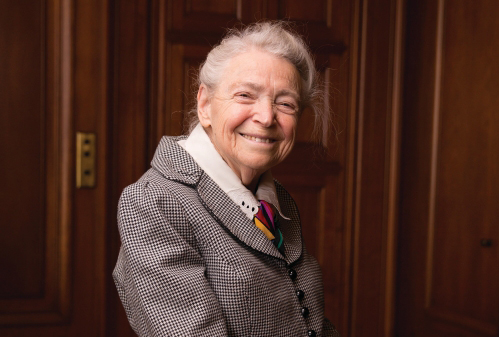 Mildred S. Dresselhaus, a solid-state physicist, materials scientist, and longtime advocate for women in science, passed away on Monday, Feb. 20, at the age of 86.

Dresselhaus is best known for her scientific work on condensed matter and the atomic properties of carbon, which prompted a journalist to give her the nickname “Queen of Carbon Science” more than 30 years ago.

Since 1967, Dresselhaus worked at Massachusetts Institute of Technology, where she was an Institute Professor Emerita, and a professor emerita in the school’s departments of physics and electrical engineering and computer science. Her long career at MIT was distinguished with many awards, including the 2012 Kavli Prize in Nanoscience, the Presidential Medal of Freedom in 2014, and the National Medal of Science in 1990.

“Millie is a giant in nanoscience through her groundbreaking work in carbon nanostructures and low-dimensional thermoelectrics,” says her collaborator, MIT mechanical engineering professor Gang Chen. “She has impacted the lives of many people at MIT and all over the world, including myself and many of my students, and she is MIT’s Yoda. This is a huge loss for the scientific community. We will miss her dearly and remember forever her smile and her teaching.”

Few women studied science when Dresselhaus decided to pursue a career in physics in the 1950s, and throughout her career, she mentored many women in the fields of physics, materials science, and beyond. In 2010, she was honored with the American Chemical Society’s Award For Encouraging Women into Careers in The Chemical Sciences.

“By her personality and intelligence alone, Millie simply had a positive influence of the life of all those who came in contact with her,” remembers her colleague Joseph Heremans, a mechanical engineering professor at Ohio State University. “It is impossible to single out any particular trait that led to this; it was the cumulative effect of her charm, scientific brilliance, and friendliness.”

Comments
Moe Moghimi, Professor of Cyber Security (February 22, 2017 12:52 PM)
I had the honor to be a student of Prof Deresselhaus. I learnt a huge amount of knowledge under her. It is a loss for Sientific Society and I wish to extend my condolences to her family and MIT Faculty and Students
Reply »

Vijayamohanan K Pillai (February 22, 2017 7:50 PM)
Me and my all colleagues in India and CSIR labs are very sad to hear this news. We will always remember her fundamental contributions in understanding the Raman spectra and electronic structure of carbon nanotubes and composites and all her visits to India for conferences were truly memorable. We hope the unparalleled simplicity, humanism and her encouragement for women to come up in science will never be forgotten in addition to her scholarly lectures to international community.
Reply »

Helen Greenwood Hansma (February 22, 2017 8:23 PM)
Dear Millie - I'm so lucky to have known her. And hosted her when she came to UC Santa Barbara many years ago. Warm wishes to all who miss her!
Reply »

Jan Meneve (February 23, 2017 12:06 PM)
Missed the opportunity to meet Mildred Dresselhaus in person during our i-SUP2010 conference due to the Eyjafjallajökull eruption. She was still intensely present via videoconference: http://www.i-sup2012.org/generalinfo/news/Pages/news.aspx. Will never forget the warm conversations with the great Lady.
Reply »

Sallie Ortiz (February 23, 2017 1:22 PM)
I met Dr. Dresselhaus when she served briefly as the director of the Office of Science for the Department of Energy. I interviewed her for an article in Energy Science News at the time and hosted her when she visited the Pacific Northwest National Laboratory. She was one of the most gracious and pleasant scientist/leaders I have ever met, and her sense of humor was legendary. She was a giant in her field and also cute as could be with her silver hair done up in Norwegian braids across the top of her head. I will never forget her.
Reply »

Irina Rabeja (February 23, 2017 10:06 PM)
Should be published a book, a collection of her important works (descriptions and details) to be used by other scientists, students etc.
Reply »

Philip Wyatt (February 26, 2017 9:56 PM)
Sorry to appear so provincial, but Millie received her Ph.D. at the University of Chicago under Enrico Fermi. What was particularly remarkable about Fermi's students, as described by former Dean of the Physical Sciences, Bob Fefferman, during an award ceremony honoring her a few years ago, was his stress on independence. To get a Ph. D. under Fermi's direction one had to pick the area of study, complete the research, and then publish the results of the thesis study under ones sole authorship without Fermi's name. Nowadays single author papers are very rare, but to receive a Ph. D. under Fermi and not reference him in its associated publication was truly remarkable. Millie, her research, and her thesis, were all exceptional and remarkable!
Reply »