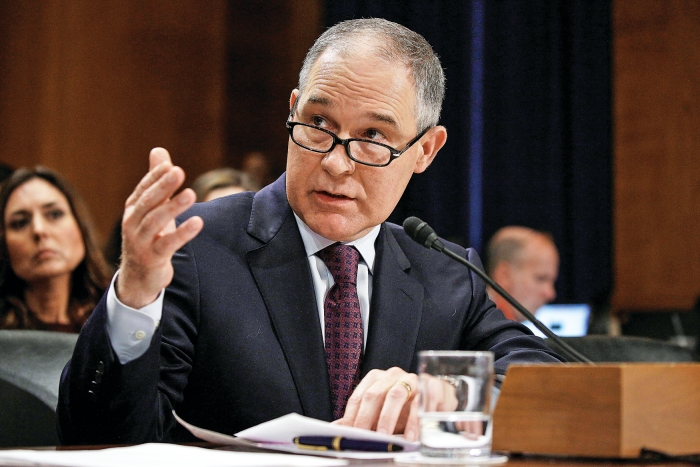 Newly confirmed EPA Administrator Scott Pruitt last week revealed his vision for the regulatory agency. “Regulators exist to give certainty to those that they regulate,” Pruitt told EPA staff on his first day in office. “Those that we regulate ought to know what’s expected of them so they can plan and allocate resources to comply.” Pruitt has been criticized by environmental advocates for being too friendly with the fossil fuel industry in his previous position as Oklahoma attorney general. He is expected to shift the federal agency’s regulatory authority toward state regulators. The U.S. Senate on Feb. 17 confirmed Pruitt to lead EPA amid objections from environmental groups, current and former agency employees, and Senate Democrats. The former Oklahoma attorney general has opposed EPA limits on carbon dioxide from power plants, and he has objected to rule-making that would overhaul the agency’s chemical plant risk management program. The American Chemistry Council, a chemical industry trade association, welcomed Pruitt’s confirmation. The group says that it is looking forward to working with him on the implementation of the revised Toxic Substances Control Act (TSCA), which was enacted last year.

Litigation
US EPA won’t appeal court ruling that nullified its science advisers policy
Chemical Regulation
Preservative butylparaben targeted for control in EU
Chemical Weapons
Tear gas and pepper spray: What protesters need to know
Share X
To send an e-mail to multiple recipients, separate e-mail addresses with a comma, semicolon, or both.
Title: Scott Pruitt takes the helm at EPA
Author: Jessica Morrison
Chemical & Engineering News will not share your email address with any other person or company.