What’s inside golf balls, and can chemistry make them fly farther? 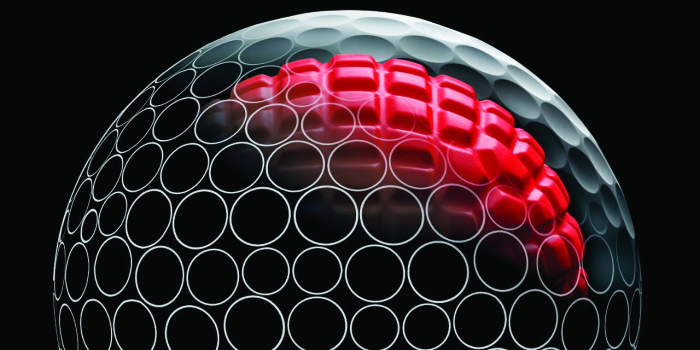 Manufacturers have taken a fresh swing at the chemistry of golf balls in recent years to make balls that suit every golfer, from the duffers that shank them out of bounds to the latest hot shots who bend them around bunkers on the pro tour.

Much of the latest chemistry is designed to make balls that are more controllable or fly farther—or both. Softer balls typically give golfers better control, while harder balls travel faster. The latest golf ball brand names (Max, Rush, TruSpeed, and Velocity) hint at where the technology is headed.

About 1.2 billion golf balls are produced every year. There are more than 80 different types of balls of varying construction materials and designs.

Although major changes have taken place in ball formulation recently, golf ball technology has been on an upswing for more than 500 years; that is, ever since the game was invented on the eastern coast of Scotland sometime in the 15th century. Back in the day, golfers played with wooden clubs and made their balls from local hardwoods such as beech.

In 1618, golf ball technology really began to take off with the creation of the featherie, a leather pouch stuffed with boiled feathers from chickens or geese. The featherie-making process was lyrically described in “The Goff,” a 1743 poem by Thomas Mathison. The feathers and leather started wet and as the leather dried, it shrank to create a tightly packed ball.

By 1848, the featherie was dropped and the gutty came on the scene. The ball was made from gutta-percha, a type of coagulated latex, likely from Palaquium gutta, a fruit originating from the Yucatan. When gutta-percha was heated in water and rolled into a sphere, it formed a virtually indestructible ball. Historians widely attribute the gutty’s creation in the 1840s to Robert Adams Paterson, a divinity student at the University of St. Andrews in Scotland. 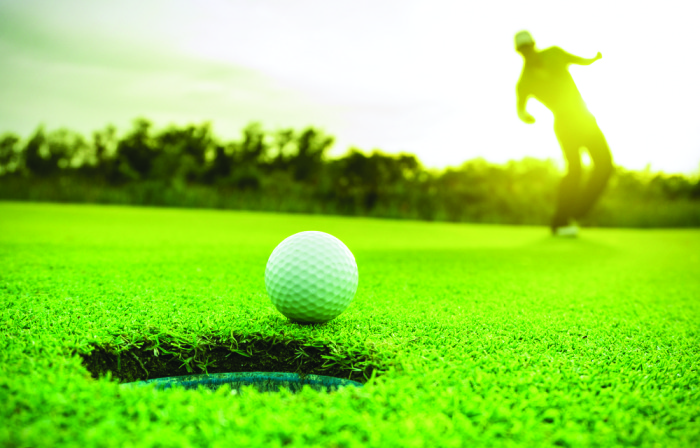 With the advent of industrialization in the late 1800s, companies began producing rubber balls from molds. In 1898, Ohio-based tire and rubber producer B.F. Goodrich introduced the first ball that had rubber threads wound around a natural rubber core, all encased in a gutta-percha sphere.

The wound ball went through a number of incarnations—including one with a compressed air core that tended to explode—before manufacturers adopted a design that replaced the gutta-percha cover with balata, a form of natural rubber obtained from a South American tree. Throughout much of the early 20th century, gutta-percha and balata balls became the weapons of choice for most golfers, pro and amateur alike.

These days, a golf ball is typically made of a butadiene rubber center surrounded by one or more rubber mantles and topped off with a tough skin. These outer layers are made from blends of high-performance ethylene copolymers known as ionomeric resins, which harden through ionic crosslinking between negatively charged acid groups and positively charged metal salts, such as zinc and sodium salts.

This design is favored because the resulting balls have a hard core with an outside that is compressible, or soft, according to the website of DuPont, which has been high on the leader board for golf ball technology for more than 50 years. DuPont’s technology, for example, is being used by Nike under the brand name Speedlock RZN.

Perhaps the most quintessential part of a golf ball is its pitted coating, which affects how the ball rolls and how it feels when it is hit by a golfer’s club. Dimples also reduce a ball’s drag as it flies through the air. Manufacturers alter the size and number of dimples to adjust performance.

PPG, among others, has produced coatings for golf balls. The company has been producing a range of proprietary coating formulations, including scratch-resistant ones made from polyurethane, for companies such as the Titleist balls producer Acushnet for more than a decade.

Unlike most politicians of the 20th century, former U.K. Prime Minister Winston Churchill wasn’t impressed with the game. He once described golf as “a game whose aim is to hit a very small ball into an even smaller hole, with weapons singularly ill-designed for the purpose.” He may have been right at the time, but as it turns out, golf ball technology has been on an upward trajectory ever since.

UPDATE: This article was modified on June 12, 2017, to refresh its information and data.

Polymers
After purchase of Clariant business, PolyOne is now Avient
Polymers
Versalis to reuse Italy’s waste plastic
Polymers
Plastics during the pandemic
Share X
To send an e-mail to multiple recipients, separate e-mail addresses with a comma, semicolon, or both.
Title: What’s inside golf balls, and can chemistry make them fly farther?
Author: Alex Scott
Chemical & Engineering News will not share your email address with any other person or company.

Comments
Bob Rogers, Cochrane, Alberta, Canada (June 15, 2017 10:55 PM)
Well done C&EN! I just love applied chemistry and your latest issue is filled with everything from new golf balls to beer and wine. The amazing thing is that there is a lot of good chemistry behind these advancements. Example: I can lose one-half dozen golf balls in a single round. I have thought, for years, what it would be like to have a "no lose" ball. Imagine, at over 1.5 billion balls produced per year, the introduction of a good retrievable ball would decrease the cost of a dozen balls to an affordable price and reduce the frustration of losing balls. It's a win-win for the average golfer.
Reply »

alex scott (June 19, 2017 9:55 AM)
I like it Bob! Many thanks for your comments. You invent the self-homing golf ball and I promise we'll write about it!
best
Alex Scott
Reply »

Robert j Statz (June 23, 2017 3:26 PM)
As the inventor of the thermoplastic resin(see US 6,653,382) used in the cores of golf balls you might find it interesting the this material is at least 35% derived from plant fatty acids hence the material is green. In addition unlike the poly butadiene based cores the resin is thermoplastic and should be completely recyclable.
Reply »