Synthetic simplification of hallucinogen pays off

[+]Enlarge
Deleting a methyl group from salvinorin A stabilizes the molecule and simplifies its construction. 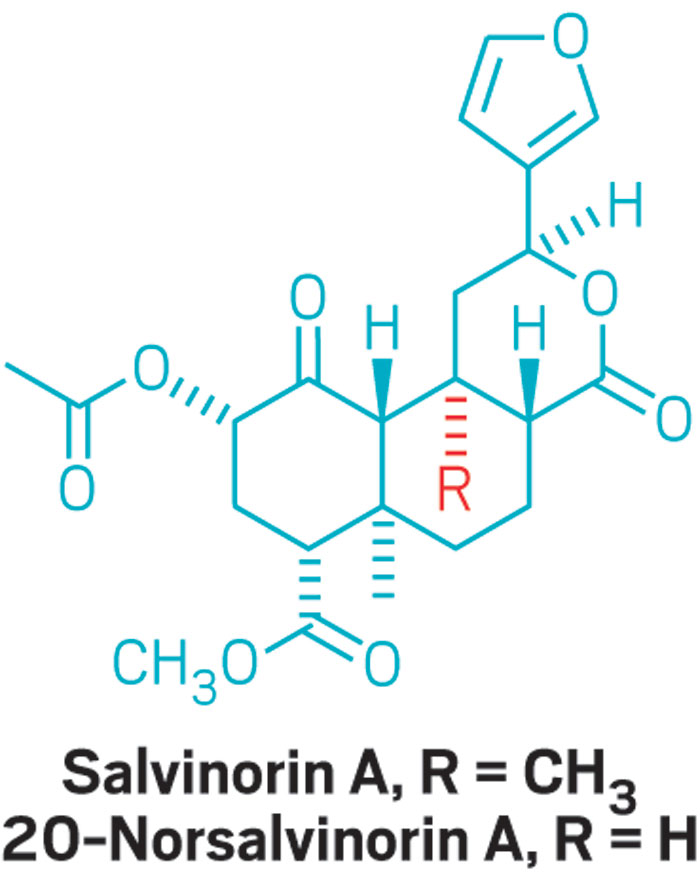 Deleting a methyl group from salvinorin A stabilizes the molecule and simplifies its construction.

Salvinorin A, a hallucinogen produced by the Mexican plant Salvia divinorum, holds promise for treating itch and pain because it activates the κ-opioid receptor while avoiding the μ-opioid receptor, a sister receptor that’s been associated with opioid abuse. Chemists have tried to synthesize salvinorin A so that they could alter the structure to sidestep the compound’s psychoactive effects while preserving its analgesic properties. But salvinorin A’s scaffold has been challenging to recreate.

Now, a team of scientists at the California and Florida branches of Scripps Research Institute, as well as at the University of Southern California, report a 10-step total synthesis of 20-norsalvinorin A (ChemRxiv 2017, DOI: 10.26434/chemrxiv.5318188). The compound differs from salvinorin A by a single methyl group and binds to the κ -opioid receptor with an affinity similar to that of the natural product. When given to mice, it also provides itch relief.

The report is one of the first manuscripts posted on the ChemRxiv Beta site, a preprint server operated by the American Chemical Society in partnership with the Royal Society of Chemistry, the German Chemical Society, and other organizations. The authors declined to discuss the work with C&EN for this story, except to confirm its factual accuracy, in compliance with the embargo policies of the journal where the paper has been submitted.

A longstanding problem for the total synthesis of salvinorin A and its analogs is the molecules’ propensity to epimerize, or switch chirality at a particular stereogenic center, according to synthetic chemist Mark Rizzacasa of the University of Melbourne. When salvinorin A epimerizes, it twists itself into the more stable, less active 8-epi isomer.

On the basis of calculations and experimental data, the researchers, led by Scripps’s Ryan Shenvi, proposed that this epimerization is driven by an unfavorable interaction between a hydrogen atom and the C20 methyl group within the molecule. They hypothesized that deleting the C20 methyl group to make 20-norsalvinorin A would stabilize the structure. This analog’s ability to bind to the target κ-opioid receptor was unknown, but the researchers performed computational studies that suggested the molecule would indeed bind with a similar affinity to salvinorin A.

“Careful attention to modeling gave a measure of confidence to the venture, although to some extent, it was still a leap of faith,” says Jonathan Scheerer, an organic chemist at William & Mary. The researchers decided to pursue the total synthesis because “the potential benefits for therapeutic development outweighed the risk,” the chemists wrote in the paper.

Salvinorin A had previously been made in 20-29 steps. The team’s route reaches 20-norsalvinorin A in 10 steps and includes a six-step sequence to a diversifiable intermediate in 13% yield.

”The approach taken by Shenvi’s team redefines a challenging natural product synthesis problem in a way that presents an intriguing but testable hypothesis.” says University of North Carolina, Chapel Hill’s Jeffrey Johnson, with whom Jeremy Roach, lead author on the study, conducted undergraduate research. “The overlay of thoughtful docking experiments, sophisticated synthesis, and compelling biological data does what a very good paper should: it causes the reader to think about how the authors’ approach could be used in her or his own lab,” Johnson adds.

Along with 20-norsalvinorin A, the research team prepared other derivatives that also demonstrated binding preference for the κ -opioid receptor over the μ- and δ-opioid receptors. “The effort opens entirely new structure-activity relationships to probe and increases the likelihood that a salvinorin-inspired molecule will ultimately find therapeutic application for the relief of pain,” Scheerer says.

CORRECTION: This article was updated on Sept. 27, 2017, to correct the name “Royal Chemical Society” to “Royal Society of Chemistry.”

Reaction Mechanisms
Computation helps chemists shorten synthesis of natural product﻿
Biological Chemistry
Synthetic simplification of hallucinogen pays off
Environment
Letters
Share X
To send an e-mail to multiple recipients, separate e-mail addresses with a comma, semicolon, or both.
Title: Synthetic simplification of hallucinogen pays off
Author: Tien Nguyen
Chemical & Engineering News will not share your email address with any other person or company.