Backed by Atlas Venture, the firm hopes to put its first compound in the clinic in 2020 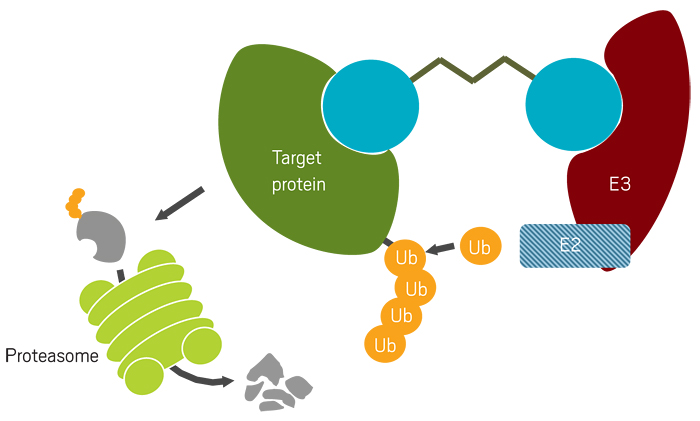 Credit: Kymera
Kymera's small molecules bind to both proteins and the ubiquitin E3 ligase, allowing them to be tagged for disposal by the proteosome.

Kymera Therapeutics has launched with $30 million in funding from Atlas Venture, Lilly Ventures, and Amgen Ventures. The firm will develop bifunctional small molecules that it believes can tackle disease-causing proteins that have long stymied drug developers.

Kymera is the latest biotech company working on targeted protein degradation, a way of tagging troublesome proteins for the cellular trash bin.

Traditionally, small molecule drugs work by blocking the activity of errant proteins. But that approach has limited drug developers to a small fraction of the thousands of proteins made by humans.

Kymera and others working on protein degradation want to use small molecules to coax the body into getting rid of troublesome proteins altogether—a strategy more often associated with RNA-based or, more recently, CRISPR-based therapeutics.

To do that, they aretaking advantage of the body’s own protein disposal system. When a protein’s time has come, ubiquitin is tacked on so that it is recognized by the proteasome—the trash compactor of the cell—for removal. Kymera is designing small molecules that feature a protein-binding domain linked to a ubiquitin ligase-binding domain. Forcing the protein and ligase to nestle in together causes the protein to be tagged for break down. The drug is then released to go repeat the process.

Several well-funded biotech firms have emerged in the last five years to exploit targeted protein degradation. Arvinas, founded by Yale University chemist Craig Crews, got its first major venture capital investment in 2013, while C4 Therapeutics, spun out of Dana-Farber Cancer Institute, debuted in early 2016 with $75 million in funding. Roche, Merck, and Genentech have all accessed protein degradation technology through partnerships, and earlier this month, Novartis teamed with the University of California, Berkeley, to form a center dedicated in part to finding dual-function molecules for targeted protein degradation.

Most drug discovery efforts to date have relied on E3 ubiquitin ligases identified by Crews and the Dana-Farber team. “At the moment, these two are the front runner ligases for various reasons, so the challenge in the field is can we now expand this to other ligases,” says University of Dundee chemist Alessio Ciulli, whose lab began a protein degradation collaboration with Boehringer Ingelheim last year.

While Kymera will not dismiss the existing toolbox of ligases, “we are going beyond those that are out there,” says the company’s co-founder and chief technology officer Nello Mainolfi. The biotech firm believes it further distinguishes itself from competitors by using informatics to find the right pairs of protein targets and ligases, alongside the medicinal chemistry chops needed to design molecules that behave differently than traditional drugs, Mainolfi says.

Kymera, which was incubated by Atlas Venture, will focus its drug discovery efforts on immuno-oncology, autoimmune diseases, and fibrosis. The goal is to have its first drug candidate picked by next year, with human studies beginning in 2020. “That’s really important for us, and for the entire field,” says chief executive officer Laurent Audoly. “We’re big believers in the modality.”

To accomplish that, the biotech firm is relying on both internal resources—it will double its team of a dozen scientists in the next 18 months—and external contract research firms.