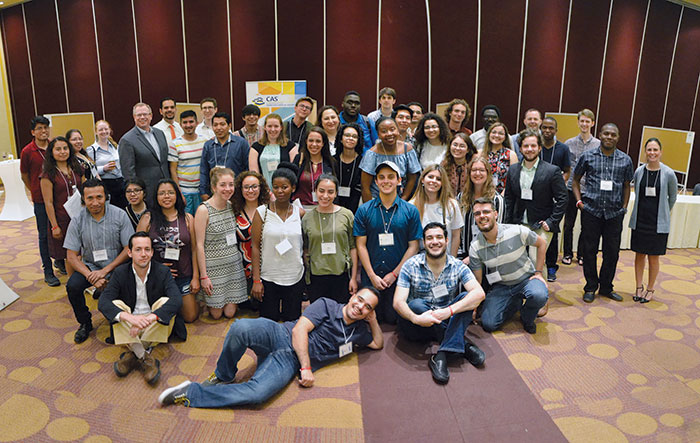 Credit: Courtesy of Adam Cooper
Students from around the Atlantic basin region gather for the younger chemists mixer. The event was cosponsored by the ACS Younger Chemists Committee and the European Younger Chemists Network. ACS President Peter Dorhout is fifth from left in the back row.

For a small conference, the inaugural Atlantic Basin Conference on Chemistry(ABCChem) delivered on a big promise: to give scientists from around the Atlantic basin region an opportunity to showcase their research and to help them build collaborations with other scientists from the region.

“The practice of chemistry is increasingly global, and there’s great science being done in all parts of the world,” says ACS Executive Director and CEO Thomas Connelly “It’s nice to bring together this particular grouping of chemical scientists.”

In total, 240 people from 22 countries participated in the conference, and nearly half the attendees were students. More than 200 papers on multidisciplinary topics were presented, including 107 oral presentations and 98 poster presentations.

Yadira I. Vega-Cantú, a chemistry professor at Monterrey Institute of Technology & Higher Education in Mexico, brought 11 of her undergraduate students to the conference, and many of them found collaborators in other countries. “My student was presenting his results on reactions in supercritical CO2, and a researcher from France asked if he could buy one of our reactors,” she says, adding that they are now looking into the possibility of commercializing the reactor, which is something they had not considered before the conference.

Galo Soler-Illia, a chemistry professor at the National University of San Martín in Argentina, says the conference offered him a glimpse of the research being done in neighboring countries. He gave a talk on nanomaterials with complex architectures. “We are aware of work in Europe and the U.S., but we are not so aware of the excellent work in Brazil or Canada or Mexico,” he says. “This meeting made me understand that we have a community that we can build.”

The conference also gave attendees an opportunity to learn more about the sponsoring societies. “I shared a table with the president of the Brazilian Chemical Society,” Illia says. “He immediately invited me to their meeting in May and we began to discuss common problems and how to make ties between the Brazilian chemical society and the Argentine chemical societies.”

Other students say the meeting helped broaden their global perspective on science. “As Costa Rica is a small country, I need connections to improve my understanding of science in the world,” says Juan José Montero Hernández, an undergraduate chemistry major from the University of Costa Rica. “I returned to my country with even more desire to continue my career and achieve goals that I had never considered.”

Adam Cooper, an undergraduate chemistry major at Stetson University who wants to pursue a career in international development, says he liked that many of the talks were focused on applications. “The general theme of the conference was focused on green chemistry and international development chemistry,” says Cooper, who presented a talk on the development of a low-cost, sustainable analytical device for the detection of counterfeit pharmaceuticals. “I absolutely loved the conference. It matched really well with my research interests.” ACS past-president Diane Grob Schmidt says she hopes the momentum of the conference continues. “There was a clear belief among the societies that the intimacy and global character of this ABCChem made it special and that a conference like this should have a place in the scientific conference calendar,” she adds.

Details about the next ABCChem will be available later this year.