From building batteries to combating cancer: How Angela Belcher puts viruses to work 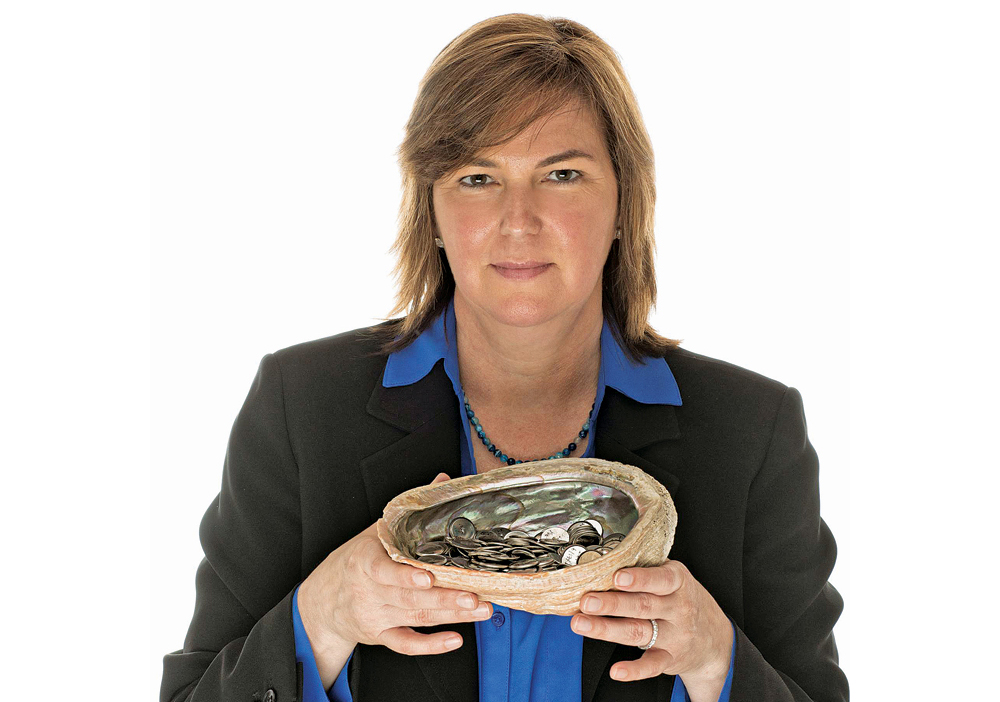 Credit: MIT
Belcher shows off an abalone shell—the inspiration for her virus-grown materials.

A giant, half-meter-long virus sits on a table in Angela Belcher’s office suite at ­Massachusetts Institute of Technology. Not a real virus, mind you. That would be terrifying.

This one’s cylindrical and built from a layered series of translucent, white plastic tubes. It illustrates the basis of Belcher’s entire research program. The model depicts the M13 bacteriophage, a virus that Belcher has used for years to assemble various nanomaterials. She now is using it to carry carbon nanotubes to cancer cells, where they act as contrast agents that allow her to image small tumors that most other technologies miss.

From the center of the cylinder, a long loop of plastic, embedded with a series of what look like computer chips, lolls out. The chips represent genes, which normally wouldn’t poke out of a virus shell. Belcher can add or remove genes from real viruses to alter their structures, and thus what they do with nanomaterials. On the front end of the model, half a dozen longer, thinner plastic tubes jut forward and loop around to form little lassolike shapes; these are models of the proteins that she coaxes the virus to express and that her team has engineered to latch onto specific parts of a tumor.

Typical adventure: travel to other parts of the world collecting rocks, minerals, and fossils

“I love viruses, probably more than most people,” says Belcher, the James Mason Crafts Professor of Biological Engineering & Materials Science & Engineering at MIT. “But what I really love are atoms. I love materials, and I like to think about how you put atoms together to create new materials and new properties. The virus is my facilitator for that.”

Belcher has turned to the M13 phage to build materials from the bottom up, inspired by the way sea creatures evolved the ability to construct their shells in various shapes. “There’s an ability to nucleate and control materials on nanometer length scales that has been working for 500 million years,” Belcher says. “We’re just borrowing from that.”

By gaining fine control over the nanostructure of various materials, she’s trying to solve problems in medicine, energy, and the environment. These virus-based production processes run in water at low temperatures and low pressures, so they’re naturally more environmentally friendly than some older industrial processes, she says. Belcher will talk about some of this work during The Fred Kavli Innovations in Chemistry Lecture at the ACS national meeting in New Orleans this month.

To get the M13 phage to become her nanobuilder, she alters its DNA to control what proteins it produces, and the proteins in turn nucleate nanomaterials in solution. The nanomaterial-coated viruses can pack together to build bulk materials, giving researchers precise control over their size, height, and orientation. The virus’s size is right for nucleating nanosized particles—it’s about 6 nm in diameter and 880 nm long.

Belcher originally got the idea from studying how abalones, a type of mollusk, grow their shells. That was the subject of her Ph.D. thesis in chemistry at the University of California, Santa Barbara. She shows off an abalone from the collection in her office—a shiny pink and pearl-colored shell with a swirling pattern and a series of small holes along one edge. It’s mainly calcium carbonate, but 2% of its mass is protein, which controls the placement of atoms that in turn control the crystal structure of the shell. On the outside, the creature formed calcite, the most thermodynamically favored structure. On the inside, it’s aragonite, an iridescent layer of mother-of-pearl.

“The organisms evolved the biological template to be able to do that, and what I’ve been doing is working on biological templates to grow other things in the periodic table,” Belcher says. “We almost always make things biological organisms wouldn’t make. It’s really hard to compete with something that evolution has already worked on for 500 million years. So I don’t try to make abalone shells, because they do such a good job at that.”

What Belcher has made with the virus are battery electrodes with better conductivity and solar cells with better electron transport properties than existing technologies. She’s used biological processes to build more than 150 different materials—metal oxides for catalysis and semiconductors such as cadmium sulfide or gallium arsenide.

Recently, Belcher’s lab has begun to devote more of its time to cancer research. She was originally split between the faculty of bioengineering and materials science. She joined the Koch Institute for Integrative Cancer Research at MIT in 2012, despite having little background in cancer, after Robert Langer, who is the David H. Koch Institute Professor, asked her to think about ways to create nanoparticles for imaging. Her lab, she says, looks nothing like a cancer lab, with its battery measurement devices, glove boxes for handling materials, equipment for testing solar cells, and a laser lab, where her team builds its own imaging equipment. But her team indeed performs cancer experiments there.

Her group is now programming its M13 phages to grab onto ovarian tumors rather than semiconductor particles. She can also engineer the virus to carry carbon nanotubes to the tumor. Because the nanotubes fluoresce at infrared wavelengths, they enable contrast-enhanced computed tomography scans to pick out cancers much smaller than the lower limits of current technologies, about 1 cm. Her group’s goal is to find tumors as small as 0.2 mm so doctors can either remove the tissue surgically or target it with therapeutics also attached to the virus.

A bit more than a third of her lab is now devoted to cancer. Belcher hopes to expand beyond imaging ovarian cancer to targeting brain and pancreatic tumors. In energy, she’s still pursuing better materials for batteries, lately focusing on sodium-ion systems. Belcher is less involved in solar cells since the rise of perovskite-based devices. Perovskites are efficient solar nanomaterials produced in a solution, so there is little that biology could do to improve the process, she says.

In environmental applications, Belcher works not with viruses but with yeast, engineered to transport certain toxic ions such as arsenic or mercury from the environment and deposit them selectively inside the organism. She’s used other yeast to convert carbon dioxide to carbonates to build materials such as tiles.

Belcher has founded two companies. Cambrios Advanced Materials of Sunnyvale, Calif., founded in 2002, uses her technology to produce silver nanowires for transparent electrodes in touch screens. Siluria Technologies of San Francisco, founded in 2008, relies on chemical catalysis to convert methane into ethylene and then into gasoline and diesel. Belcher has plans to create several new start-ups, one focused on cancer, but won’t talk about the details of those yet.

When she’s not busy with research or those business ventures, Belcher cochairs MIT’s pK–12 Action Group, which is working to improve education for students, from toddlers to teenagers, around the world. It bothers her that, by third or fourth grade, many children have decided they’re not good at math or science. “They haven’t really seen any great science, so how do they know that they’re not good at it?” It’s important, she says, to prepare children, including her own 7- and 12-year-olds, to deal with all the global challenges she’s concerned with. “There’s a lot of people across the country, across the world, trying to address those issues, but I think it’s really going to fall to the next generation to make the most progress and solve the most challenging issues on the planet,” she says.

Neil Savage is a freelance science writer based in Lowell, Mass.

Adhesives
Mussel-inspired polymer glue sticks to wet surfaces
Materials
Pentadiamond outshines the original
Materials
Calgon to boost activated carbon capacity
Share X
To send an e-mail to multiple recipients, separate e-mail addresses with a comma, semicolon, or both.
Title: From building batteries to combating cancer: How Angela Belcher puts viruses to work
Author: Neil Savage, special to C&EN
Chemical & Engineering News will not share your email address with any other person or company.

Comments
Jim Foster (March 7, 2018 6:29 PM)
Great to see someone out of the past so so well. Her major professor told me she was one of the brightest students he ever had.

By the way Angie I am now living in Santa Barbara.