Already dominant in making ethoxylates in Brazil, Oxiteno takes on the U.S. 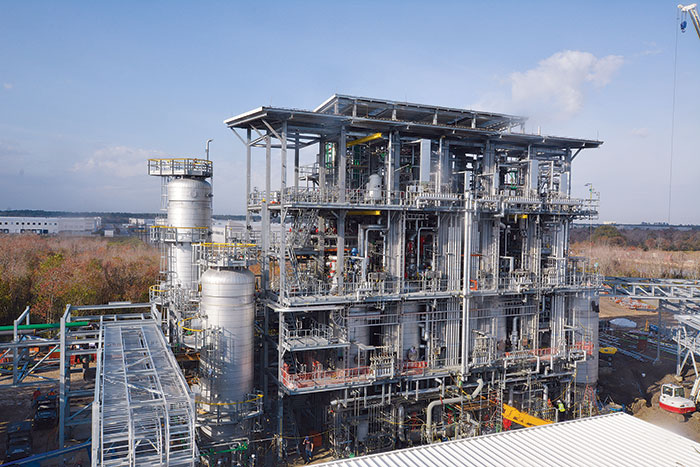 Credit: Oxiteno
Oxiteno is getting ready to open this alkoxylation facility in Pasadena, Texas.

It shouldn’t be a surprise that BASF is the world’s largest producer of ethoxylated chemicals, widely used in cosmetics and cleaning products. After all, the German firm has long been one of the world’s biggest makers of chemicals of all types.

What may be a surprise is that the company claiming to be the world’s second-largest producer of ethoxylates is a little-known Brazilian firm named Oxiteno.

For the past decade, Oxiteno, which is part of the conglomerate Ultrapar, has been taking cautious steps out of Brazil and into the rest of Latin America through small acquisitions. Now the company is about to take a more brazen leap. In the coming weeks, it will open a $150 million facility in Texas devoted to the production of ethoxylated products, made by adding ethylene oxide to a substrate compound. If the market rollout goes as planned, Oxiteno won’t be low profile much longer.

The chief architect of Oxiteno’s emergence on the global scene is João Benjamin Parolin, the firm’s longtime CEO. Parolin joined the company in 1986 and worked his way up through its sales and marketing organization to take the top job in 2007.

For us, ethoxylation is our core. We like to say we can alkoxylate anything.
João Benjamin Parolin, CEO, Oxiteno

Parolin explains that Oxiteno was created in the early 1970s during the formative years for Brazil’s chemical industry. The company started out as the country’s only producer of ethylene oxide and ethylene glycol, working at two government-controlled chemical complexes.

It then ventured downstream by forming a local joint venture with the British firm ICI to produce ethoxylated nonionic surfactants. Surfactants lower the surface tension in liquids, making them important ingredients in detergents and other cleaning products.

In the 1980s, Oxiteno bought out ICI’s stake in the venture. It also built its first R&D center. “We knew the technology would get old, and we needed to develop new products,” Parolin says.

By the early 2000s, Oxiteno was dominant in Brazil, a fact that Kevin Gallagher, a personal care ingredients consultant, remembers well. At the time, Gallagher worked for the British specialty chemical maker Croda, which was also active in the country.

“Oxiteno effectively had a monopoly on ethoxylation in Brazil,” Gallagher recalls. “If you wanted to do nonionics manufacturing in Brazil, you had to go through them.”

Having conquered Brazil, Oxiteno decided to internationalize. Starting in 2005, it opened commercial offices in Argentina, the U.S., Belgium, China, and Colombia. And over several years it acquired surfactant firms in Mexico, Venezuela, and Uruguay. In Brazil it built three ethoxylation units and acquired a fatty alcohol facility.

In the process, Oxiteno’s sales grew from around $300 million in 2000 to more than $1.2 billion in 2017. But according to Parolin, the firm’s focus didn’t change. “For us, ethoxylation is our core,” he says. “We like to say we can alkoxylate anything.”

One of the most common alkoxylations is the combination of ethylene oxide with long-chain fatty alcohols to yield nonionic surfactants. Examples are lauryl and cetyl alcohol ethoxylate. Applications other than household products include crop protection, paints and coatings, and oil and gas drilling.

Oxiteno opened its first U.S. office, in Houston, in 2007. Then in 2012 it acquired an idle synthetic vitamin E plant in Pasadena, Texas. Oxiteno dusted off the plant’s glass-lined reactors and added new equipment. By the end of the year, Parolin says, it was producing surfactant blends for agriculture and synthesizing amine oxides on a small scale.

But being Oxiteno, the firm’s ultimate goal was to ethoxylate in the U.S. Parolin says his team scouted for acquisition candidates but found nothing suitable. “After many years of trying to buy, we decided to go the grassroots route,” he says.

In 2015 the firm announced plans to build a 170,000-metric-ton-per-year alkoxylation plant on the Pasadena site. To Parolin’s knowledge, it’s the largest chemical plant built from scratch in the U.S. by a Brazilian firm. In anticipation of the opening, Oxiteno has been building a market by exporting surfactants from its Latin American facilities—about 30,000 metric tons last year.

Part of Oxiteno’s U.S. strategy is to strike coproduction deals with small ethoxylators in the Northeast. Gallagher says these firms struggle with the high cost of shipping ethylene oxide from the Gulf Coast, where most of the toxic and flammable gas is produced.

Oxiteno proposes to these firms that it conduct the ethoxylation for them in Pasadena and then ship the more benign finished products at much lower cost.

Otherwise, the firm plans to continue doing what it already does well: Create nonionic surfactants and other alkoxylated products for many specific applications. Oxiteno already has a slate of 50 products queued up to be made in Pasadena, Parolin says.

For example, the plant will be the only Gulf Coast producer of polysorbates, nonionic surfactants made by ethoxylating sorbitan and esterifying the resulting molecule with fatty acids. Polysorbates act as emulsifiers in foods and cosmetics.

Parolin also points to the firm’s line of ethylene oxide-propylene oxide copolymers used to separate, or “break,” oil-water emulsions in the oil field. The firm developed the copolymers at its labs in Brazil. Now produced in Mexico, they will soon be made in the U.S.

Even with seeding from its Latin American plants, Oxiteno will have to work to find customers for the new plant’s output, Gallagher, the consultant, cautions. How it finds them could make the difference between success and failure. “Will they sell on price alone?” he asks. “Or can they provide service improvements and logistics efficiencies?”

To help on the service side, in late 2016, Oxiteno opened a lab where it is adapting its products to U.S. needs. Located in a science business incubator at the University of Southern Mississippi in Hattiesburg, the facility includes a pilot plant where Oxiteno does small-scale alkoxylation.

The lab is run by Kip Sharp, who earned his Ph.D. in polymer science and engineering at the university. He’s one of many people whom Oxiteno recruited—in his case from rival Sasol—to build up its U.S. presence.

Sharp says Oxiteno initially sought to put the lab in Texas but was eventually attracted to the Mississippi incubator and its “plug and play” facilities.

The lab has seven employees, all M.S. and Ph.D. scientists. Among their jobs, Sharp says, are deformulation of finished products to analyze ingredients and development of specialty alkoxylates or blends. The lab also handles sophisticated application work, such as testing blends of surfactants and agricultural actives for their stability in soil.

Sharp tries to offer fast response to customers. He recalls receiving an urgent inquiry after Hurricane Harvey from a company that couldn’t get an alkoxylated oil-field chemical it desperately needed. The Hattiesburg lab made a sample in two days, Sharp says, and a week later Oxiteno had scaled up production at one of its Latin American facilities.

Oxiteno has come a long way in the U.S. since buying an idle vitamin E plant six years ago. Today, the firm employs about 110 people in the U.S., Parolin says. And it’s about to open a huge facility that could bring in $200 million in annual sales.

Gallagher, the consultant, isn’t surprised at the progress. Oxiteno reminds him of another Brazilian firm, Natura Cosméticos, that similarly conquered its home country. Natura broke out internationally last year with the acquisition of the Body Shop, a personal care products chain, for more than $1 billion.

“I take very seriously the Naturas and Oxitenos of the world,” Gallagher says. “They are a force to be reckoned with in South America. It’s only a matter of time before these companies establish a bigger presence globally.”

Consumer Products
Why chemical makers love the cleaning product industry
Specialty Chemicals
Brazil’s Oxiteno opens Texas alkoxylation plant
Business
How encapsulation is taking root in the laundry room
Share X
To send an e-mail to multiple recipients, separate e-mail addresses with a comma, semicolon, or both.
Title: Already dominant in making ethoxylates in Brazil, Oxiteno takes on the U.S.
Author: Michael McCoy
Chemical & Engineering News will not share your email address with any other person or company.