CRISPR is coming to the clinic this year 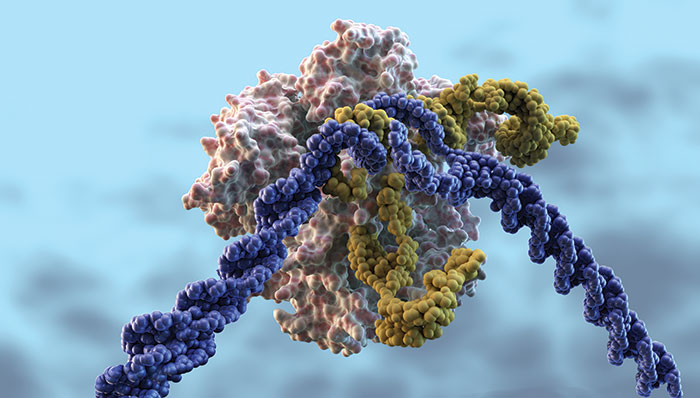 Credit: CRISPR Therapeutics
The CRISPR system uses a guide RNA (yellow) to direct the Cas9 enzyme (white) to a specific location in a cell’s DNA (blue) for cutting.

Since its conception in 2012, CRISPR gene editing has spurred headline-making breakthroughs in research labs. In 2018, though, some of CRISPR’s biggest firsts are likely to happen in the clinic.

Three biotech firms, each partly founded by one of the three inventors of CRISPR, are gearing up for the first industry-sponsored clinical trials attempting to treat, and potentially cure, genetic diseases. The programs that have recently been garnering the most attention are for two blood diseases: sickle cell and β-thalassemia.

In December, Crispr Therapeutics became the first company to file an application with any regulatory authorities to begin clinical trials for a CRISPR therapy, called CTX001. With permission from European regulators, the trials will begin with β-thalassemia patients this year in Europe, where the disease affects people predominantly of Mediterranean descent.

“It is a momentous occasion for both our company and the field,” says Samarth Kulkarni, CEO of Crispr Therapeutics. In the coming months, the firm also plans to ask the U.S. Food & Drug Administration for permission to use CTX001 to treat sickle cell disease, a genetic blood condition more prevalent in the U.S. Vertex Pharmaceuticals will partner with Crispr Therapeutics to develop the drug for both indications.

I’m hopeful that this is the first in a wave of new treatment options for patients with β-thalassemia and sickle cell disease.
Jacob Corn, University of California, Berkeley

“I’m hopeful that this is the first in a wave of new treatment options for patients with β-thalassemia and sickle cell disease,” says Jacob Corn, a University of California, Berkeley, researcher who has used CRISPR to fix sickle cell mutations in human cells in the lab. Both diseases are ideal for fixing with gene editing, since their precise cause is known: mutations in a gene that makes a subunit of hemoglobin, the protein that carries oxygen throughout the blood.

In sickle cell, the mutation causes normally donut-shaped red blood cells to warp into a crescent shape; the cells get stuck inside blood vessels, depriving tissues of oxygen. β-thalassemia is caused by mutations that prevent the production of fully functional hemoglobin, which for some people can cause severe anemia. Correcting these mutations in a patient’s blood stem cells would grant them a perpetual supply of disease-free blood.

CRISPR requires at least two basic components to alter genes: a guide RNA, which carries the code that specifies where to edit a genome, and an enzyme called Cas, which follows the guide RNA to make a cut in a cell’s DNA.

Actually changing the DNA sequence, or inserting a new sequence, requires a third component—a DNA template—which has often led to lower rates of successful CRISPR editing. So instead of trying to fix the faulty DNA in sickle cell and β-thalassemia, Crispr Therapeutics is opting for a different approach to boost levels of healthy hemoglobin. 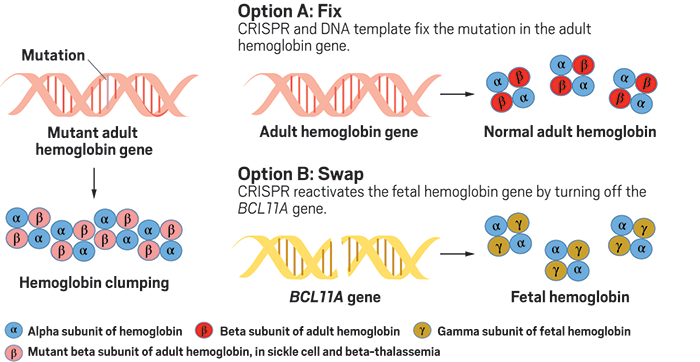 Crispr Therapeutics isn’t the only company chasing this idea. CRISPR-based Intellia Therapeutics is partnering with Novartis on a similar program. Sangamo Therapeutics and Bioverativ are teaming up to use an older gene-editing technology called zinc finger nucleases to make a break in BCL11A. In October, Sangamo received a green light from FDA to commence clinical trials. The company plans to enroll its first subject by mid-2018.

Editing efficiencies using CRISPR to actually fix a gene used to be very low, just a few percent of cells, Porteus says. “Over the last couple of years, we’ve twiddled all the knobs,” he says, noting that he now sees up to 80% of genes corrected with CRISPR.

The competition to develop sickle cell and β-thalassemia treatments isn’t limited to gene-editing. Bluebird Bio, a gene therapy company, has ongoing clinical trials for both conditions using a virus to deliver a healthy copy of the hemoglobin gene into cells. Multiple companies are developing small molecules drugs to help the conditions as well.

“Everyone is working on these diseases because we know exactly what to do,” says Stuart Orkin, a hematologist-oncologist at Boston Children’s Hospital. “We don’t know yet which program will be the best,” he says. “But the first one that is shown to be very effective and safe could crowd out the others.”

Many people anticipated that the first industry-sponsored CRISPR trial would come from Editas Medicine’s program to treat a genetic form of blindness via an injection of CRISPR-filled viruses into the eye. After a delay, the firm now plans to ask FDA for permission to test the therapy in mid-2018.

Crispr, Editas, and Intellia also have earlier-stage programs for diseases of the liver, lungs, muscles, brain, and metabolic system.

But for all the hubbub around the drug company trials, Orkin notes that several Chinese universities began using CRISPR in CAR T-cell immunotherapy trials for cancer in 2016. These therapies involve removing a patient’s immune cells, genetically engineering them to target cancer cells, and reinjecting them into the blood.

The University of Pennsylvania also plans to use CRISPR in a CAR T-cell clinical trial, and a large number of preclinical programs in industry could lead to a flood of similar trial announcements in late 2018 or 2019.

Right now, though, CRISPR’s spotlight is on genetic blood diseases. Porteus plans to submit an application to FDA for the Stanford clinical trial, which is funded by the California Institute for Regenerative Medicine, in December 2018. Until then, his team will focus on scaling up the CRISPR therapy from a mouse-sized treatment—editing 2 million to 5 million cells at a time—to a human-sized treatment involving 200 million to 500 million cells.

“Is our cupcake recipe going to translate into a wedding cake recipe?” Porteus asks. “It is likely to work, but we have to prove it.”

Crispr Therapeutics, meanwhile, has secured a contract manufacturer in Europe that will receive patient blood stem cells, edit them, and ship them back to the clinical trial sites. Patients will then undergo chemotherapy or irradiation in preparation for their edited blood stem cells to be transplanted into the bone marrow, where they will hopefully produce healthier blood cells for life.

A lingering concern in the CRISPR field is the potential for off-target cutting, in which CRISPR accidentally cuts the DNA in the wrong location. Such a cut could result in a new mutation—possibly benign, possibly cancerous. According to Kulkarni, extensive computer prediction, followed by cell and animal testing, led his team to a therapy that has no detectable off-target cutting.

“It is important that they do this very carefully,” Orkin says of CRISPR cutting. “Because if there is a mistake or bad effect, it will have repercussions beyond a single patient.” It could set the whole field back.

Gene Therapy
CRISPR start-up Graphite Bio launches with $45 million for targeted DNA integration
Start-ups
A hot year for cell therapy start-ups
Business
CRISPR gene editing in humans appears safe, and potentially effective
Share X
To send an e-mail to multiple recipients, separate e-mail addresses with a comma, semicolon, or both.
Title: CRISPR is coming to the clinic this year
Author: Ryan Cross
Chemical & Engineering News will not share your email address with any other person or company.

Comments
Brandon (January 9, 2018 2:36 AM)
They should target trials on telomere lengthening and age reversal thereby preventing disease in billions.
Reply »

Kareem Karassery (March 19, 2018 1:26 AM)
As a father of a 26 year old Thalassemia patient, I am eagerly waiting for the success of gene therapy as soon as possible.Even though many clinical trials were took placed in recent years a concrete progress is not achieved in this field.In this periods many patients like Thalassemia and Sickle cell disease were died due to lack of treatment from the different part of the world.We hope that this research will reach to a final remedy in a speedy manner.
Kareem Karassery
Gen. convener,
Blood Patients Protection Council,Kerala,India
Mob.09447019182
Email.kareemkarassery@gmail.com
Reply »