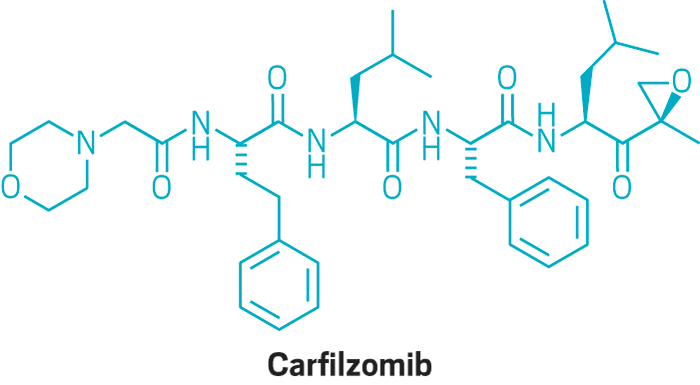 Multiple myeloma is an incurable type of blood cell cancer. Two decades ago, people diagnosed with the disease lived for about 3–4 years. Now, thanks to new drugs including the protease inhibitor carfilzomib, those affected can survive for 10–20 years. However, since its approval by the U.S. Food & Drug Administration in 2012, people taking carfilzomib have experienced cardiac side effects, as noted on the drug’s labeling, but the risk of developing these conditions hasn’t been well defined.

The researchers, led by Adam Waxman of the University of Pennsylvania, found that 18% of carfilzomib-treated patients experienced at least one of these events, with 8% experiencing severe to life-threatening events. In three of the large, randomized trials, compared to people with myeloma not taking the drug, those taking carfilzomib were twice as likely to suffer from a cardiac event.

Treating patients with severe diseases like multiple myeloma requires a constant balance between risks and benefits, says C. Ola Landgren, an oncologist at Memorial Sloan Kettering Cancer Center, and unfortunately, all current treatments for the disease are associated with serious side effects such as pain, numbness, and organ failure. He points out that survival data were not presented in the new analysis as they were in two recent large clinical trials showing that people receiving combination treatments including carfilzomib lived up to eight months longer than those treated with other drugs.

Carfilzomib’s high efficacy cannot be understated, Waxman says. He hopes the study will help inform patient-doctor discussions and push them to look for early signs of cardiac conditions. Some of these cardiovasular conditions may be reversible if patients stop taking the drug, and others like hypertension can be managed with medication.