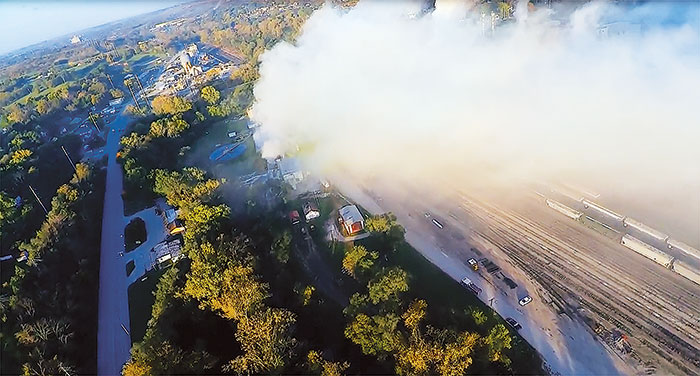 Credit: Chemical Safety Board
A cloud of chlorine gas rose above an MGP distillery in Kansas in 2016 after workers mistakenly added sulfuric acid to a tank of sodium hypochlorite.

The U.S. Chemical Safety Board is recommending changes to chemical transfer procedures and better transfer equipment, including automated and remote shutoff systems, following an accident that released chlorine and sent 140 people to medical centers in Atchison, Kan. The accident occurred in October 2016 when workers inadvertently unloaded sulfuric acid from a tanker truck into a fixed tank of sodium hypochlorite at a distillery owned by liquor and wheat products supplier MGP, CSB says in a report and video. Fill pipelines for the sulfuric acid and sodium hypochlorite tanks looked identical, were only 0.5 meters apart, and were not clearly marked, CSB notes. As a result, 15,141 L of sulfuric acid entered the hypochlorite tank, releasing a toxic cloud of chlorine and other chemicals. CSB says industry figures show similar unloading operations can involve large quantities of chemicals with serious consequences—every 8.4 seconds, 36.2 million metric tons of chemical products were delivered in the U.S. last year. “Facilities need to work collaboratively with chemical distributors to conduct a risk assessment and develop and agree upon unloading procedures,” CSB investigator Lucy Tyler says. The board says regulatory gaps did not lead to the accident.