This materials scientist is solving the problems of lithium-sulfur batteries 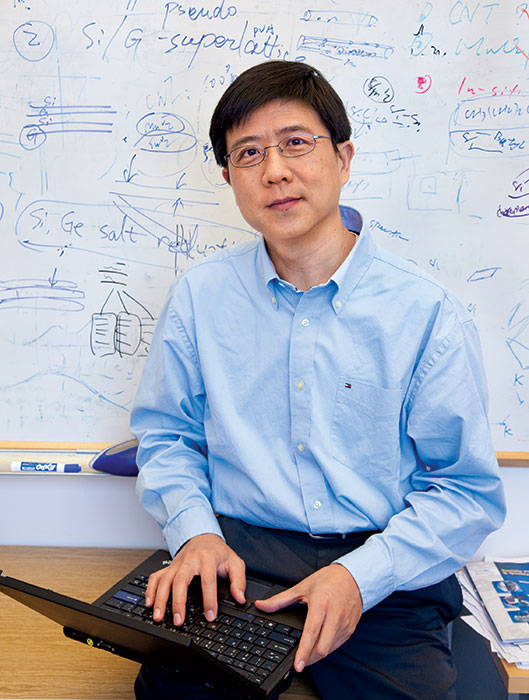 Yuegang Zhang is determined to make a better battery. The physicist and materials scientist started his career developing new ways to manufacture and use carbon nanotubes. In 2008, while at Lawrence Berkeley National Laboratory, he found himself drawn to perfecting a promising—but challenging—battery technology based on lithium-sulfur chemistry. He tested a variety of carbon nanomaterials to make a sulfur cathode that could pair with a lithium metal anode. In 2012, driven by the desire to commercialize lithium-sulfur batteries for drones and electric vehicles, Zhang returned to his home country of China to start a company. Katherine Bourzac sat down with him to discuss his progress.

Why are lithium-sulfur batteries so promising?

If everything works well, a lithium-sulfur battery can store five times as much energy by mass as current lithium-ion batteries. Because sulfur is lightweight, these batteries have high potential to be used in applications such as drones. And if we increase the lifetime of these batteries to be comparable to lithium-ion batteries, they can also be used in electric vehicles. Let’s assume we can keep the size of the battery about the same, but we can double or triple the energy stored. That will extend the mileage of electric vehicles significantly.

Why aren’t these batteries in use yet?

For the sulfur cathode, three difficulties prevent its application. One is that sulfur is not conductive; it’s insulating. So we have to mix sulfur with conductive carbon. Another thing is that sulfur expands as it takes up lithium ions when the battery discharges. The volume can expand a lot—up to 76%. That requires you to design a cathode that’s mechanically stable so it won’t pulverize over cycles of charging and discharging. The third challenge is the intrinsic difficulty of the lithium-sulfur chemistry. When lithium ions reach the sulfur cathode, they react to form unwanted compounds like lithium polysulfide. These intermediate reaction products can easily dissolve in most of the organic solvents used in electrolytes, corroding the anode over time so that the battery can store less and less energy.

Why is now the right time to commercialize this technology?

Before going to Lawrence Berkeley lab, I spent most of my time in industrial laboratories at NEC and Intel, so I know how industry works. I know that to go from the lab to a real product will take 10 years at least. Now it has been about 10 years since we started working on lithium-sulfur. I think it’s the time to start working on commercialization of lithium-sulfur; we have solved the scientific problems.

Has moving back to China helped with starting your company?

Wanting to commercialize lithium-sulfur batteries was one of the most important motivations for me to move to China in 2012. I first moved to the Chinese Academy of Sciences. In 2016 I founded my company, Monta Vista Energy Technology, in Suzhou. And this May, I officially joined Tsinghua University in Beijing. Tsinghua has a good atmosphere for commercialization; the university encourages professors to transfer their technologies to market.

Another important factor is that the majority of battery production is now in China. This means there are a lot of battery engineers here, so it is easy to recruit experienced people. We have more chances to exchange information with other battery makers, which helps us transfer our academic R&D into an industrial mode quickly. And we can reach many potential customers in the drone or electric vehicle industry in China. Being close helps us target their needs.

So are lithium-sulfur batteries ready to go on the market?

There are still challenges. Now that we have a good cathode material, we have found a problem on the lithium metal anode side: the pulverization of lithium. When you discharge the battery cell, most of the lithium atoms move to the cathode side. So on the anode side, there’s not much lithium left. When you charge the cell, the lithium is supposed to come back to the anode. But this process is not uniform. The ions come back but in some places they don’t redeposit on the anode uniformly, so after 30 or 40 cycles the anode is destroyed. We are still working on solutions to this problem.

But we can make a lightweight battery that we can attach to a drone, and it can fly pretty well. Not for a long time, but it can fly.

It sounds like there are problems with these batteries everywhere you turn. Is that exciting for you?

Yes. But now I would say it’s getting more interesting. If we’re looking at real commercial applications, there are still many problems. But they are engineering problems; they are not scientific problems. I think that they should be solvable, so I’m still very optimistic lithium-sulfur will work.

Katherine Bourzac is a freelance writer. A version of this story first appeared in ACS Central Science: cenm.ag/zhang. This interview was edited for length and clarity.

Energy Storage
Boosting the performance of aqueous potassium-ion batteries
Energy Storage
Entrepreneur rethinks lithium-ion batteries with an eye toward storing renewable energy
Energy Storage
Fire-retardant electrolyte could usher in practical lithium-metal batteries
Share X
To send an e-mail to multiple recipients, separate e-mail addresses with a comma, semicolon, or both.
Title: This materials scientist is solving the problems of lithium-sulfur batteries
Author: Katherine Bourzac
Chemical & Engineering News will not share your email address with any other person or company.