Chemical structures in T-shirts and tattoos 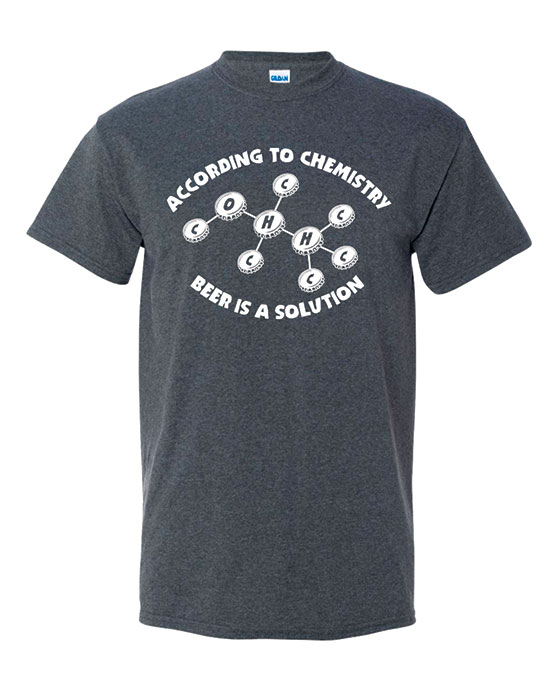 Reader Marcia France of Lexington, Va., wrote to the Newscripts gang to let us know of a chemistry T-shirt gaffe she spotted. The erroneous ensemble is emblazoned with the words: “According to chemistry beer is a solution.” The words wrap around a model of ethanol where bottle caps stand in for atoms.

Indeed, when posted on Twitter, the T-shirt prompted C&EN’s Lisa M. Jarvis to posit that perhaps the design was drawn by someone who’d “had too much beer.” Of course, the carbons and hydrogens had simply been swapped—an unforgivable transgression for chemists, but an easy error among the less atomically aware.

“I’m afraid this was just a good old-fashioned mistake,” says Arielle Richard, director of public affairs for the science T-shirt website Thread Science and designer of the goofed garb. “Obviously we don’t want to put anything out there that’s false or wrong,” she tells Newscripts. “We have the corrected ethanol image being printed up and hopefully for sale pretty soon.”

Thread Science was cofounded by husband and wife Jimmy and Lauren Shepherd, a musician and a mathematician, respectively. Richard was brought in to help design and market the T-shirts, but she says the whole operation is a part-time affair for everyone. Thread Science has been around since 2003, but it only launched its own website in late 2017. Rather than spend money on advertising, the company donates 25% of its proceeds to different causes, which buyers can choose at checkout.

As a token of thanks for pointing out the error, Thread Science has promised to send France a T-shirt. Richard asks readers to point out any other errors they might spot, though she preemptively notes that Thread Science is aware that the Science Ninja T-shirt (which spells out Ninja with element symbols) is intentionally incorrect. They know there are no elements with the symbols Nj or A. “We’re just trying to make people smile with these shirts,” Richard says. 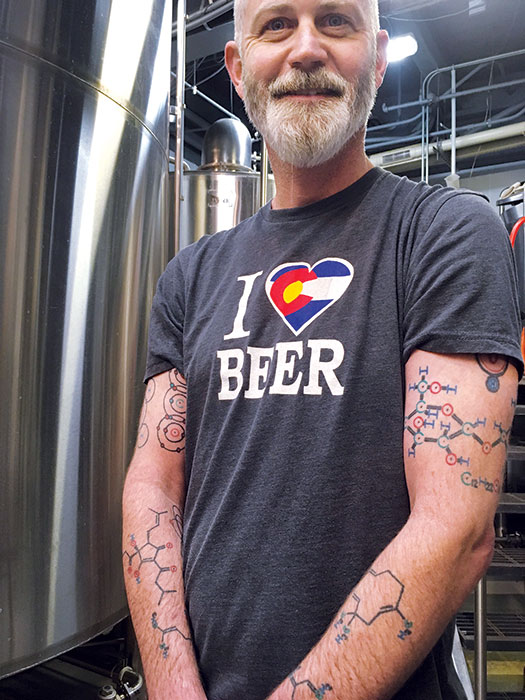 While the chemical structure on Thread Science’s T-shirts is easy enough to redo, the chemical structures in tattoos, like those inked on John. M. Sims’s skin, can create less forgiving errors. Sims is the head brewer at Wynkoop Brewing in Denver and has 13 tattoos on his arms and shoulders that feature molecules important to the beer-brewing process. He started with ethanol (yes, error-free), followed by maltose and then several flavor compounds.

Reader Andrew W. Maverick, of Baton Rouge, La., brought Sims’s uniquely inked arms to the Newscripts gang’s attention after a recent visit to Wynkoop. “John is very knowledgeable about the chemistry of brewing,” Maverick writes. “He may have taught more people more organic chemistry than most of us chemistry professors.”

One of Sims’s favorite lessons for visitors to the brewery is the transformation of the compound humulone to trans-isohumulone, which happens when hops are boiled during the brewing process. “That’s interesting to me because humulone by itself is not bitter. But when you boil it, it isomerizes and turns into a water-soluble bittering compound,” he tells Newscripts.

Of his tattoos, Sims says he’s thinking of filling in the rest of the space with other atoms, small molecules, and beakers. He adds, “The aesthetics suit me better than flames and skulls.”

Science Communication
Book covers and Disney characters—there’s a periodic table for everything
Graduate Education
International students in US cannot take classes online only
Undergraduate Education
COVID-19 shakes up summer internship and research opportunities
Share X
To send an e-mail to multiple recipients, separate e-mail addresses with a comma, semicolon, or both.
Title: Chemical structures in T-shirts and tattoos
Author: Bethany Halford
Chemical & Engineering News will not share your email address with any other person or company.