Chemists use magnets, lasers, and electricity to manipulate droplets with nanoparticle skins

By adding a suit of nanoparticle surfactant armor to otherwise dull droplets, chemists in South Korea have created tiny reaction flasks that they can maneuver and modify using magnets, lasers, and electrical fields. The droplets offer a new way to do microscale chemical reactions that avoids some of the pitfalls associated with microfluidics, such as difficulty mixing solutions and limitations on the types of solvents that can be used.

Bartosz A. Grzybowski, Zhijie Yang, Jingjing Wei, and Yaroslav I. Sobolev, of the Center for Soft & Living Matter at the Institute for Basic Science, create the armored droplets using what they call a nanoparticle surfactant. The surfactant has a nanoparticle core that welds gold to some other nanomaterial, such as Fe3O4. The gold half has a coating of ligands with a polar tail, while the other half is coated with hydrophobic ligands. As a result of these coatings, the particles form monolayers at the interface of organic and aqueous solutions (Nature 2018, DOI: 10.1038/nature25137).

Mix it up
Lasers mix this droplet's contents of Congo red dye and hydrochloric acid thanks to nanoparticle surfactants.
Credit: Nature

Mix it up
Lasers mix this droplet's contents of Congo red dye and hydrochloric acid thanks to nanoparticle surfactants.
Credit: Nature

In addition, electrostatic fields can punch tiny openings in the droplets, allowing those that are touching to merge and combine their contents. Grzybowski imagines a microscale chemical factory with hundreds of different droplets that can react with one another. “You zap them with an electric field and you make connections between them.” 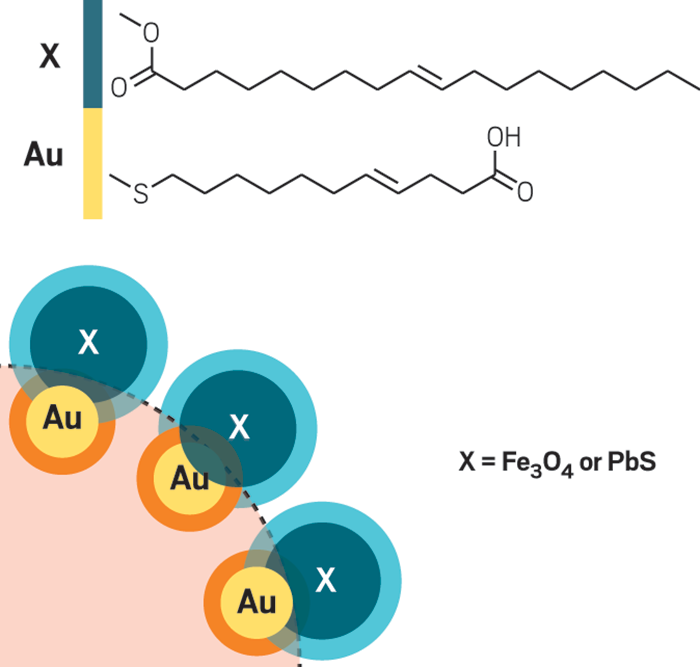 Credit: Adapted from Nature
Nanoparticle surfactants make a monolayer skin on a droplet.

Grzybowski notes that he was surprised that the thin nanosurfactant skin has such a strong influence on the comparatively larger droplets. It’s impressive, he says, that surfactants measuring just 5–10 nm wide can make a millimeter-sized droplet magnetic or responsive to light.

“This is really neat work,” comments Leroy Cronin, an expert in complex chemical systems at the University of Glasgow. “It shows how to combine electronic, optical, and magnetic control of both individual and large numbers of droplets, as well as shows potential for using them as reaction vessels. I’m excited to see how this is extended later into more complex applications.”