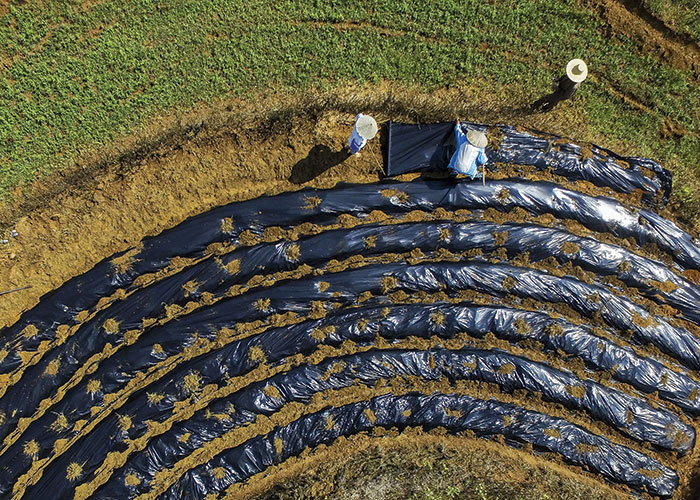 Plastics have been of great help in raising China’s farm output. Mulching films, made mostly from polyethylene, are used on millions of hectares of land throughout the country to conserve water and protect crops from weeds.

Over the years, as more and more farmers realized that mulching film stabilizes soil temperature, economizes water, and helps cut pesticide use, Chinese usage has boomed, turning the country into the biggest user worldwide by a wide margin.

China now consumes more than 1.4 million metric tons of mulching film per year, according to data collected by the big German chemical maker BASF. But the deployment of mulching film on such a grand scale has come at a heavy price.

Soil quality has declined alarmingly from the impact of film fragments that sink deep into the ground. This happens because Chinese farmers usually buy the thinnest film, which tends to break down during attempts to remove it. Even when successfully removed, it is hard to recycle.

Change is afoot. A growing number of soil chemists and other agricultural scientists at institutes throughout China are documenting the scale of the problem and recommending solutions. And chemical companies are promoting, with limited success so far, the use of compostable films on Chinese land.

A recent paper shows that some farmland in Xinjiang, an autonomous region in northwest China, contains as much as 500 kg of polyethylene per hectare. “This is a very high level of contamination,” notes Alberto Castellanza, international sales manager at the Italian biomaterials producer Novamont. When the polyethylene content in soil reaches such high levels, salinity increases, and yields go down, he says.

Because of its intensive use of mulching film, Xinjiang has been of interest to private firms and researchers in recent years. The remote region, cold in winter but arid and scorching in summer, is home to China’s largest cotton plantations and is its top tomato-growing region. Water scarcity in Xinjiang makes mulching films almost indispensable.

In a 2016 paper in the Journal of Integrative Agriculture, Dan Zhang and colleagues reported that mulch film use in Xinjiang had grown fourfold between 1993 and 2013 to 160,000 metric tons per year (DOI: 10.1016/S2095-3119(15)61240-0). Mulching film residues exceeded Chinese national standards in most of the agricultural land they tested in the region.

Novamont is paying particular attention to Xinjiang. For 10 years, the company has been field-testing films in the region made with its Mater-Bi compostable resin, which is created from starch, butanediol, and other materials. Novamont tests demonstrate that polyethylene film cannot successfully be recovered from the ground using machinery, Castellanza says.

BASF has also been demonstrating the use of film made with its Ecovio biodegradable resin on cotton, tomatoes, corn, and other crops in Xinjiang.

“Farmers are conservative and need to be sure that the material works,” says Lydia Lau, market development manager for Ecovio in China. Made from adipic acid, polylactic acid, and other raw materials, Ecovio completely biodegrades in the ground after use, she claims.

But biodegradable film suppliers have so far not been able to sell large quantities in Xinjiang, a potentially large market. Government officials in Xinjiang are more involved in buying decisions than in other parts of China, according to Lau, making selling there more complicated.

Novamont’s Castellanza adds that government buy-in is key because subsidies would likely be required to convince farmers to switch to more expensive biodegradable films. “It’s extremely important to secure financial support from the government,” he says.

In other parts of China, sales of Ecovio-based films are more encouraging, Lau says. Organic farms, which tend to enjoy higher profit margins, are more enthusiastic buyers of the materials. It’s easier to obtain and renew an organic certification when using biodegradable film, she adds.

Generally, Lau says, Chinese farmers focus on the price difference between biodegradable film and the thin polyethylene film they are using. This view does not take into account the damage that polyethylene causes to soil over time, she says.

Chinese firms have also struggled in their attempts to promote new agricultural films. Olivia Chan, a sales executive at the biodegradable materials producer Jiangsu Torise Biomaterials, tells C&EN that her company has had more success selling to producers of compostable plastic bags than to farmers in Xinjiang.

Torise’s materials are based on polylactic acid, a corn-derived polymer that the company manufactures in the corn-growing province of Henan.

Chinese academics, meanwhile, are proposing both thicker polyethylene mulch films and the development of low-cost biodegradable films as solutions to the problem of plastic contamination. In their 2016 study, Zhang and colleagues demonstrated that the level of soil contamination in Xinjiang is inversely related to film thickness because thicker film is easier to recover.

“Increasing film thickness is an effective means to reduce the amount of residual film,” they wrote. Zhang tells C&EN that his team didn’t study the quality of soil covered with biodegradable film because the material wasn’t in use anywhere they tested. In a 2014 paper in Environmental Research Letters (DOI: 10.1088/1748-9326/9/9/091001), E. K. Liu and coauthors also noted that thicker film was easier to recover and recommended the development of cheaper biodegradable films.

In the U.S., where strawberry farmers and some other growers use thicker mulching film, albeit to a lesser extent than in China, soil pollution is not a major problem, according to research published last year by scientists at the University of Tennessee Institute of Agriculture, Washington State University, and Montana State University.

A multistate survey of strawberry farmers conducted by authors Jessica Goldberger and Courtney Lyons showed that a majority of respondents used or had tried polyethylene mulching films, and most didn’t think it polluted the soil.

Many growers, however, were dissatisfied with the amount of work required to remove the film from the soil. About half of respondents had tried biodegradable film to get around the problem, but some found it was costly and tended to degrade at an unpredictable pace.

In China, despite the many market development challenges, Novamont remains optimistic about the use of biodegradable film. The company has already considered building a plant in China to meet the country’s demand, Castellanza notes. “We are not at the stage of investing, but China can change direction very fast,” he says.

And a change of direction is certainly possible, given that the use of polyethylene films—at least the thinner ones—is rapidly becoming unsustainable.