Two-dimensional materials can be exploited to make a new kind of electronic device that researchers have dubbed an atomristor. In early stage studies, the researchers have demonstrated a possible application for atomristors in low-power communications circuits (Nano Lett. 2017, DOI: 10.1021/acs.nanolett.7b04342). 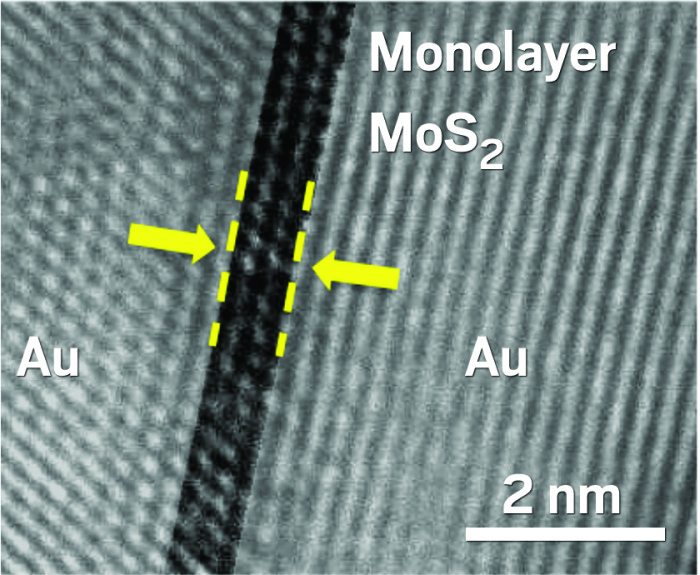 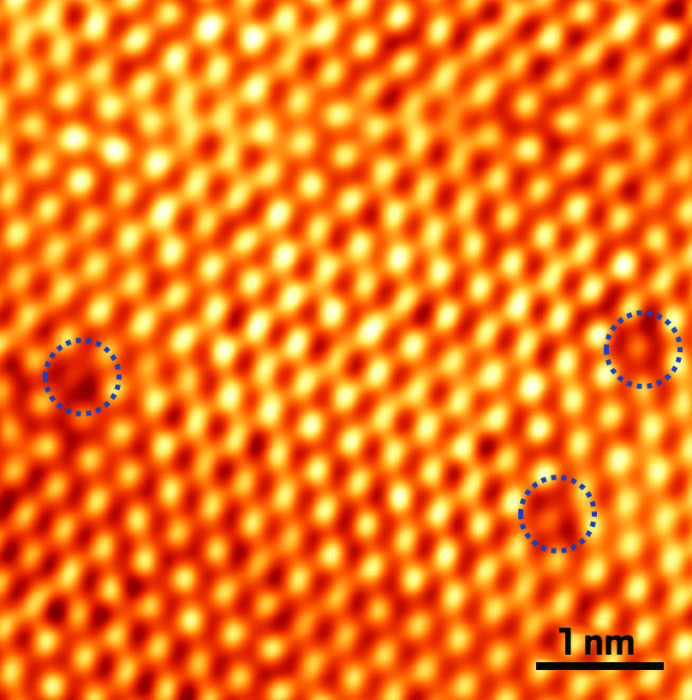 Credit: ACS Nano
Defects in molybdenum disulfide—the missing sulfur atoms circled in this scanning tunneling micrograph—might be the key to how atomristors work.

The device’s name comes from “atomically thin memristor.” Memristors are the odd cousin of the electronics family, capable of acting in ways similar to memory cells and transistors. They’re particularly promising for use in computer memory because they are nonvolatile: Even when the power is turned off, they hold onto their data. Scientists are also exploring memristors for brainlike computing applications because the devices can both process and store information, like neurons do. And like real neurons, they can exist in a variety of states, not just as a 1 or a 0, because their electrical resistance can be varied along a continuum.

Researchers believed that memristors could not be made from atom-thick materials, because they suspected these devices would leak electrical current, says Deji Akinwande of the University of Texas, Austin. That has meant that the advantages of 2-D materials, such as flexibility and tiny dimensions, have been out of reach of the memristor.

A few years ago, Akinwande and his group decided to try building one anyway. He and graduate student Ruijing Ge were intrigued by results from the team of Northwestern University materials scientist Mark C. Hersam, who made a memristor by placing a single layer of molybdenum disulfide side-by-side with two metal electrodes (Nat. Nanotechnol. 2015, DOI: 10.1038/nnano.2015.56). Akinwande thought that a more traditional memristor structure—a stacked design consisting of a layer of 2-D material between the electrodes—would be more practical. But he was concerned that they wouldn’t be able to use a layer thinner than 5 nm without current leaking between the electrodes.

Ge convinced him to try making the devices, and she was right, he says. Ge and others in the lab sandwiched a variety of atomically thin transition metal dichalcogenides (TMDs), such as molybdenum disulfide, between metal electrodes. When the researchers applied voltages across the electrodes, they could change the electrical resistance of the material along a continuum, an essential characteristic of a memristor. And when the power was switched off, the resistance stayed steady. They have made atomristors using TMDs much thinner than 5 nm—devices made from hexagonal boron nitride, for example, use just 0.7 nm of the material. The lab tried every 2-D TMD material they could find, and all could be made into atomristors.

Atomristors could be used to store data, like their non-2-D counterparts, but Akinwande explored a new application for them: in telecommunications switches. Their atomristors can switch on and off at a frequency of 50 gigahertz. Right now, conventional circuits in radiofrequency switches of the sort the UT Austin group made have to remain powered on. But atomristor devices could support low-power communications networks because they only consume energy when sending signals, says Akinwande.

What’s not clear is how these devices work, and why they don’t have the expected leakage problems. Akinwande believes that defects in the materials are the key. It’s common for molybdenum disulfide, for example, to be missing sulfur atoms. When the electric field is applied, atoms from the metal electrodes may move into the vacancies, creating a bridge that allows current to flow directly between the two electrodes and changing the material’s resistance, Akinwande says. If this is the case, when the electric field is reversed, the metal atoms would migrate back home to the electrode. But when the power is off, the atoms would stay where they are, explaining why the atomristors are nonvolatile.

Hersam, who is continuing to work on memristors made from 2-D materials, agrees that defects in the material are likely important and says that Akinwande’s atomristors show the desirable properties found in memristors: low power operations and fast switching speeds. Akinwande is collaborating with theorists and with imaging experts to explore the mechanism.