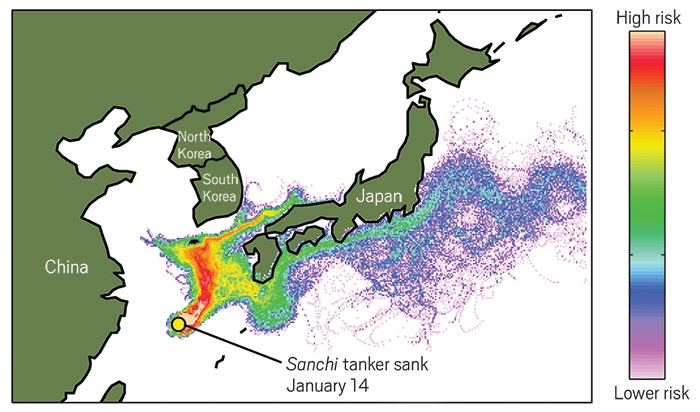 Credit: Ekaterina Popova
Ocean current modeling suggests where oil from the Sanchi might go in the next three months, with the most likely path shown in red.

More than 100,000 metric tons of oil carried by an Iranian tanker that sunk on Jan. 14 in the East China Sea could endanger nearby fisheries and marine life immediately and for years to come, researchers say. But with many details of the wreck still unknown, it is too early to predict the effects with any certainty.

The tanker Sanchi was carrying 136,000 metric tons of ultralight crude oil called condensate when it collided with a Chinese cargo ship on Jan. 6. The Sanchi burned until it sank eight days later in 115 meters of water. All 32 crew members of the tanker are presumed dead.

Condensate is a volatile type of oil similar to gasoline that is used to make jet fuel and other products. It is highly toxic to marine life. To transport the condensate payload, the Sanchi was likely running on bunker fuel: a heavy, tarlike, viscous substance that is less toxic than condensate but much more persistent in the environment.

Authorities don’t know how much of the ship’s cargo and fuel burned up in the fire or evaporated or how much is now leaking into surrounding waters.

China’s State Oceanic Administration, which has been monitoring the spill by ship, plane, and satellite, said satellite images showed four discrete oil slicks with a total area of 101 km2 near the wreck site on Jan. 17. On Jan. 18, however, the reported spill area had shrunk to 21 km2 in three slicks.

China plans to survey the wreck with underwater robots, according to China’s Ministry of Transport. In other ship accidents, robots have been used to plug leaks and eventually help recover oil still on the ship, says Doug Helton, regional operations supervisor for the Emergency Response Division at the U.S. National Oceanic & Atmospheric Administration, which is not involved in the response to this spill. The Sanchi would be more likely to leak heavily if it broke up before sinking or if it landed upright, Helton says. If it remained in one piece and capsized “like an upside-down glass,” it might hold some of its contents until they could be recovered.

The condensate and bunker fuel would likely have very different potential fates and impacts on the marine environment. “The analogy I use is that if you spill some gasoline when you’re loading up your lawn mower, it evaporates over the next couple of hours or day. But if you spill some motor oil when you’re changing the oil in your car, there’s a sheen in your driveway for weeks,” Helton says.

Condensate, which is buoyant and highly soluble in water, contains a mixture of hydrocarbons, including aromatics like benzene and toluene along with straight-chain, branched, and cyclic alkanes, says Christopher Reddy of Woods Hole Oceanographic Institution. Condensate’s properties make it difficult to contain and clean up because it can’t be skimmed and many sorbents won’t retain such light material, he says.

In the short term, the condensate could dissolve in the water column and create a plume that could damage or kill marine organisms, especially those in their early life stages, says Deborah P. French-McCay, an oil spill expert at RPS Group, an environmental and energy consulting firm. According to Greenpeace East Asia, the spill area is a spawning ground for bluefin leatherjacket and swordtip squid and a wintering ground for seafood species including hairtail, yellow croaker, chub mackerel, and blue crab. Marine mammals also use it as a migratory pathway.

However, the impact of the condensate would most likely be short-lived. That’s because it can rise through the water column and evaporate at the surface or be dispersed and diluted by ocean mixing, especially in windy conditions like those shown in pictures of the response, Helton says. Eventually, some of the condensate would also be degraded by microbes and light.

The bunker fuel is less acutely toxic than condensate, but it is heavier, more viscous and sticky, and more persistent in the environment. It could cover wildlife in oil and eventually wash up on shorelines as tar balls, with results similar to those from the Exxon Valdez and Deepwater Horizon spills.

However, according to a Reuters report, the tanker may have been carrying only 1,000 metric tons of bunker fuel, compared with the 136,000 metric tons of condensate. And the bunker fuel may not come to the surface; if temperatures are below about 10 °C on the seafloor, the fuel could stay there, says Peter Hodson of Queen’s University—although fuel on the seafloor could still affect marine life.

Ekaterina Popova and her colleagues at the U.K. National Oceanography Centre used a sophisticated ocean model to predict the transport of particles representing oil at the surface from where the ship sank by averaging surface current fields in the region over the past 15 Januaries. They predict that oil on the surface would likely be drawn into the strong Kuroshio current and could reach the coastline of Japan within a month.

On that timescale, any condensate at the surface would likely evaporate, disperse, or be degraded, Helton says. However, bunker oil would be more likely to persist and be transported to the coast, which “could be really bad” for fisheries and wildlife, French-McCay says.

In contrast to the model results, an official for Japan’s Environment Ministry said on Jan. 16 that the spill is not expected to reach Japan’s shores, the Japan Times reported.