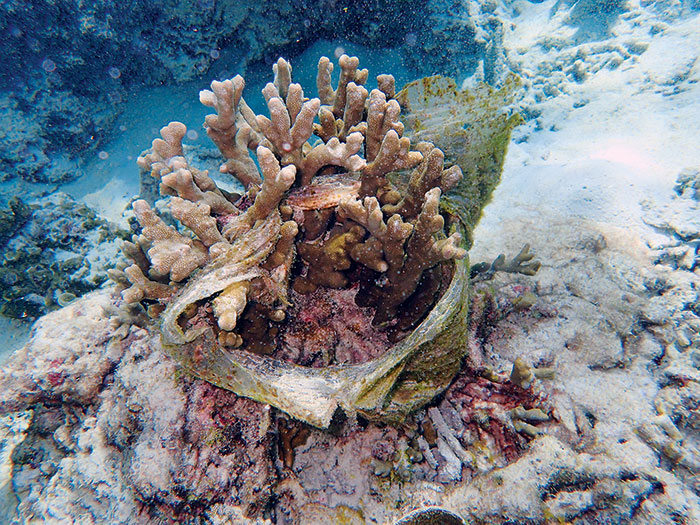 Coral reefs around the world face an existential threat from overfishing, climate change, nutrient runoff, and ocean acidification. Now researchers have added another hazard to the list: plastic waste. In a survey of reefs in the Asia-Pacific region, marine biologists found that contact with plastic garbage increased corals’ risk of disease from 4 to 89% (Science 2018, DOI: 10.1126/science.aar3320).

Researchers and environmentalists have been sounding the alarm about the 4.8 to 12.7 million metric tons of plastic that lands in the oceans every year. Still, says Douglas Rader, chief oceans scientist at the Environmental Defense Fund and one of the study’s coleaders, the strong connection between coral disease and plastic was extremely surprising. “This is striking, particularly in the context of all the other risks to reefs,” he says.

The plastics study, an international effort involving researchers from Cornell University and collaborators in Indonesia, Hawaii, and Australia, studied 159 reefs in Myanmar, Australia, Thailand, and Indonesia. Researchers looked for signs of disease, including bands of necrotic tissue on the corals. They also noted whether the corals were in contact with pieces of plastic 50 mm in diameter or larger. Courtney Couch, a coral disease ecologist at the Hawaii Institute of Marine Biology who surveyed reefs in Indonesia, says she saw many corals wrapped in plastic fishing lines and plastic bags.

This study is the first to show that plastic waste is associated with risk of disease in a marine organism. Although the researchers didn’t establish a mechanism to explain the correlation, Couch notes that plastic ocean trash can carry pathogens. Plastic also can wrap around coral, which causes stress and in turn leaves the organism vulnerable to infection.

Marine chemist Tracy Mincer of the Woods Hole Oceanographic Institution, who says he reads studies about plastic in the ocean with a skeptical eye, is convinced. “It is a lot of work to do these surveys, and the increased disease susceptibility is a big signal,” he says. The study opens the door to further research on the marine-plastic microbiome and its effects on ecosystems, Mincer says.

Rader notes that some biologists expect the world’s reef ecosystems to almost entirely collapse by 2050. “That’s a profound risk, not just to biodiversity but also to hundreds of millions of people’s livelihoods and well-being,” Rader says. But plastic pollution is a more tangible problem for coral than climate change, Couch says, and can be addressed through better waste management strategies and by using less plastic.

Climate Change
Climate change is destroying our coral reefs. Here’s how scientists plan to save them
Environment
Seabirds eat plastic pollution because it smells good
Biological Chemistry
Microplastics stunt fish growth and alter behavior
Share X
To send an e-mail to multiple recipients, separate e-mail addresses with a comma, semicolon, or both.
Title: Plastic waste threatens coral reefs
Author: Katherine Bourzac
Chemical & Engineering News will not share your email address with any other person or company.