[+]Enlarge
Credit: Nature
Three-residue hydrophobic patch (red) controls the movement of risperidone (mostly yellow) in and out of its binding site in DRD2 (mostly blue). 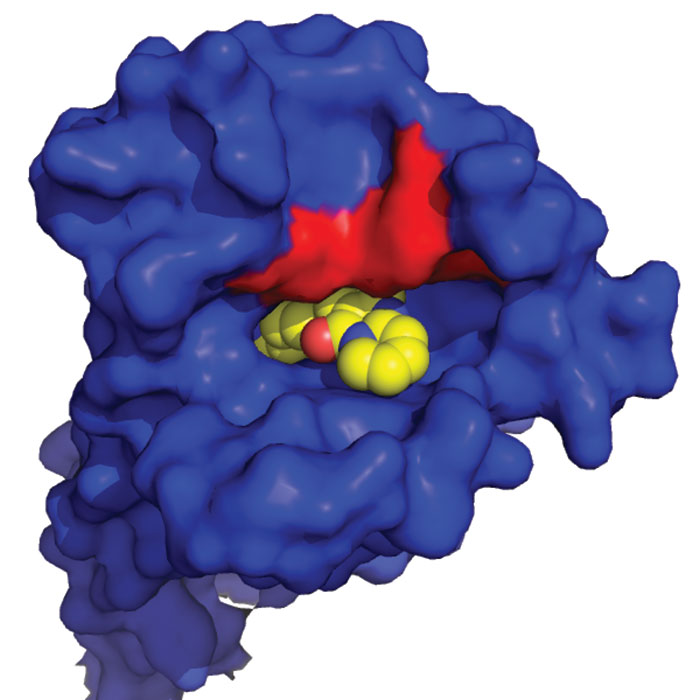 Credit: Nature
Three-residue hydrophobic patch (red) controls the movement of risperidone (mostly yellow) in and out of its binding site in DRD2 (mostly blue).

Two years ago at a scientific meeting, Bryan L. Roth of the University of North Carolina, Chapel Hill, announced that he and his colleagues were trying to solve the structure of the D2 dopamine receptor (DRD2), a target of many antipsychotic drugs. Researchers at the session told him not to waste his time, Roth says. Many groups previously had tried to obtain high-resolution structures of DRD2 bound to drugs but had failed because the complexes are very difficult to stabilize for crystallization.

Roth, UNC colleagues Sheng Wang and Daniel Wacker, and coworkers decided not to listen to that advice. And they have now wasted enough time to come up with the first high-resolution crystal structure of DRD2 bound to a drug, risperidone (Nature 2018, DOI: 10.1038/nature25758).

Drugs like risperidone that target DRD2, which is a G protein-coupled receptor, are the current standard treatments for patients with schizophrenia. Unfortunately, these antipsychotic agents also have serious side effects such agitation, vision impairments, loss of balance, and uncontrolled body movements.

The side effects stem in part from the drugs’ promiscuity. For example, risperidone binds a major serotonin receptor and other dopamine receptors in addition to DRD2. If researchers understood the molecular details of how atypical antipsychotics, the class of drugs to which risperidone belongs, bind to and block DRD2, they could design new drugs that are more highly selective for DRD2.

To finally get that level of structural detail, the UNC team mutated DRD2 and replaced one of its loop segments with a readily crystallizable enzyme, T4 lysozyme. These modifications stabilized the drug-receptor complex sufficiently to allow the scientists to obtain a crystal structure at 2.9 Å resolution. 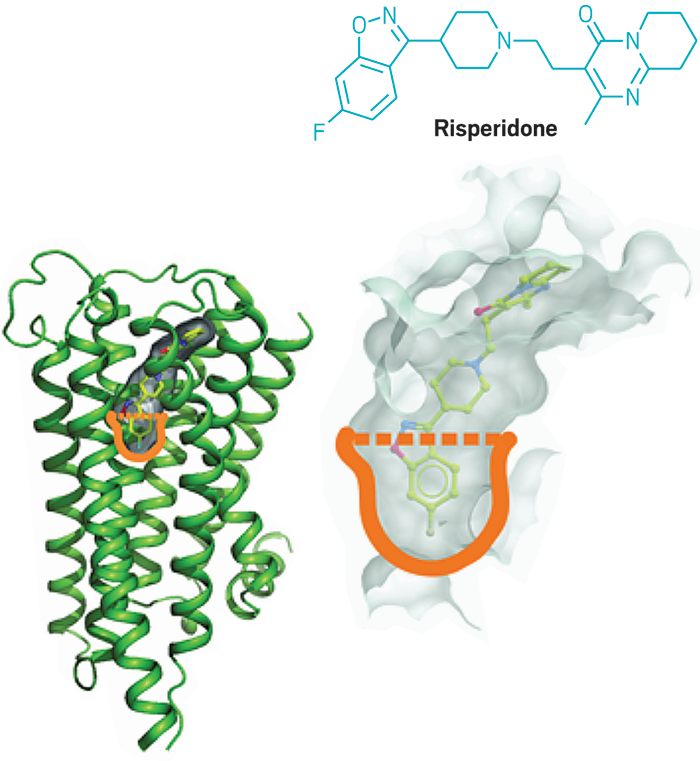 “It is definitely a major advance,” says dopamine receptor expert David R. Sibley of the National Institute of Neurological Disorders & Stroke. “The structure reveals a number of novel features that may help to develop novel therapeutics for the treatment of several neuropsychiatric disorders.”

Specifically, analysis of the structure revealed a set of three hydrophobic amino acids that exert tight control over entry and exit of risperidone into and out of the DRD2 binding site. The UNC researchers believe that risperidone analogs that slip in and out more readily and thus bind less tightly might be less prone to cause movement disorders.

The structure also showed that when risperidone binds DRD2 it penetrates deeper into the protein than other ligands like the atypical antipsychotic drug nemonapride do when they bind other dopamine receptors. Compounds that bind more shallowly to DRD2 might be less promiscuous, the team thinks.

“We are actively using the structure to discover what we hope are safer and more effective antipsychotic drugs,” Roth says.

Pollution
Crystal structure shows LSD bound to its receptor
Pharmaceuticals
Marijuana receptor caught in the act
Share X
To send an e-mail to multiple recipients, separate e-mail addresses with a comma, semicolon, or both.
Title: Structure of antipsychotic drug target solved
Author: Stu Borman
Chemical & Engineering News will not share your email address with any other person or company.

Comments
Kazi Riad Kader Amit (May 12, 2018 1:18 AM)
Further development will make this mission successful.
I need some suggestions regarding safer promotion of Risperidone in the third world country like
Bangladesh.
Reply »