Battery recyclers get the lead out

Saddled with a challenging legacy, companies say they are reducing emissions of the heavy metal 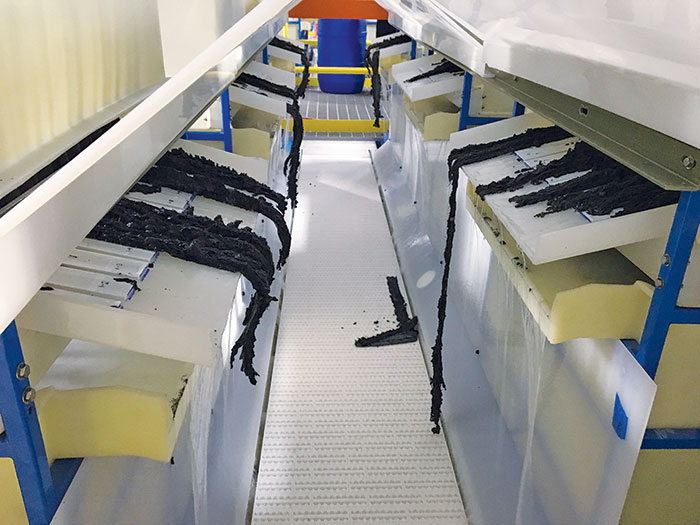 The lead-acid car battery industry can boast of a statistic that would make a circular-economy advocate in any other sector jealous: More than 99% of battery lead in the U.S. is recycled back into batteries.

That, according to the Battery Council International, which tallies the lead recycling data, beats highly recycled materials like newspapers and aluminum cans, which both recycle at rates of less than 65%. And it far exceeds the rate of polyethylene terephthalate bottles at just over 30%.

But it would be rash to give the lead industry high marks for sustainability without recognizing that lead is perhaps the world’s most notorious pollutant. In the 1970s, after it became clear that the metal is a neurotoxin, governments phased out lead pigments from paints and tetraethyl lead from gasoline.

Lead contamination in the air has dropped by 99% since 1980. And the concurrent decline in blood levels has been so dramatic that some economists even suggest it was responsible for plummeting crime rates.

The lead battery industry witnessed firsthand lead go from everyday essential to environmental pariah. Many of its smelters blasted the heavy metal into local communities for decades. Regulators reined that in, and now the industry faces some of the strictest emissions standards in the world.

Related: The Crimes Of Lead

Those regulations cost battery recyclers a pretty penny. But in many cases, recyclers are lowering emissions even below what the law prescribes, in an effort, they say, to get ahead of regulation or to meet their own stricter sustainability targets. Some companies can get emissions so low that a year’s worth of a plant’s pollution can be held in the palm of a hand. One firm, a newcomer to the industry, is developing a process to get rid of smelting altogether.

The typical lead-acid battery under the hood of a car is a living fossil, employing chemistry that hasn’t changed much since the 19th century. Each battery has a negative metallic lead anode and a positive lead dioxide cathode, both immersed in an electrolyte of aqueous sulfuric acid. As the battery discharges, the lead and the lead dioxide react with bisulfate ions to yield lead sulfate. When the battery recharges, the reactions reverse.

Lou Magdits, director of raw materials for the lead processing firm Doe Run, says the chemistry’s simplicity is one reason batteries are recycled so successfully. “If you were to sit down with a piece of paper and design the best battery in the world to foster recycling, you would design the lead-acid battery,” he says.

He notes that battery manufacturing is highly standardized as well. For instance, lead-acid battery cases are all made of the same polypropylene copolymer to ease recycling.

In contrast, Magdits notes, the chemistry and architecture of lithium-ion batteries differ from cell to cell, depending on whether the battery is being used for personal electronics, power tools, or electric cars. This inconsistency complicates recycling.

The recycling process for lead-acid batteries is also relatively simple. First, inspectors peruse tractor trailers full of the batteries for foreign objects. For example, some large lithium-ion batteries look to the untrained eye like lead ones and can taint recycling, says Mark Yingling, vice president of environment, health, and safety at Doe Run.

Recyclers then break the batteries and drain them of electrolyte. Many recyclers convert the sulfuric acid into sodium sulfate, commonly used as a powdered laundry detergent filler. Machines crush the solids and a flotation tank separates the plastic, which is carted off for reprocessing into resin that will be made into new battery casings.

The remaining solids consist mostly of lead, lead dioxide, and lead sulfate. The lead compounds are smelted at high temperatures—sometimes more than 1,000 °C—with a carbon reducing agent. The resulting lead metal is further refined in kettles at about 500 °C to get rid of the impurities.

Around the recycling plant, the biggest potential sources of fugitive lead emissions are the battery crushing process and the smelter. Indeed, a number of lead recycling plants have had environmental problems over the years when such emissions weren’t adequately contained.

Perhaps the most infamous case is that of Exide’s recycling plant in Vernon, Calif., in Los Angeles County. The facility opened in the 1920s and by the 2010s was recycling as many as 40,000 batteries a day. It chronically violated air quality standards. California authorities estimated that as many as 10,000 nearby homes were contaminated.

In 2015, the company, then bankrupt, signed an agreement with the U.S. Justice Department acknowledging criminal conduct in its handling of lead. It agreed to close the facility and pay $50 million for cleanup.

A facility in Dallas that another recycler, RSR, operated from the 1920s until the 1980s became a Superfund site in the 1990s, because of decades of lead emissions. The U.S. Environmental Protection Agency and the Dallas Housing Authority removed lead from the site and redeveloped it along with a local public housing complex and 400 nearby properties.

Because of the hazards, lead battery recyclers are subject to tough regulations. In 2008, EPA lowered ambient air quality limits for lead to 0.15 µg/m3 from the 1.5-µg/m3 level set in 1978. In 2012, the agency rolled out additional maximum achievable control technology standards, which set limits on pollutants that escape smoke stacks and required full building enclosures.

Doe Run’s Yingling says the 2012 regulations were the bigger hurdle for his company. They required additional ventilation and enclosures at its recycling plant in Boss, Mo. In all, the company spent $70 million to make the site compliant.

Carl Raycroft, vice president of environmental, health, and safety compliance at RSR, says his company is trying to get emissions way below what the regulations require. In 2016 the company finished installing wet electrostatic precipitator technology at its recycling plants in Indianapolis; City of Industry, Calif.; and Middletown, N.Y., at a total cost of about $115 million.

Emissions from the smelter first run through a baghouse, which captures particulates, and then through scrubbers, which grab most of the other emissions. The precipitator, Raycroft says, is a “final polishing step.” It electrostatically charges any remaining particles and magnetically attracts them to the surface of metal tubes.

The simplicity of the lead-acid battery’s chemistry is a big reason why it is readily recycled.

The unit brings emissions down dramatically. The Middletown plant was emitting about 200 kg of lead annually before the precipitator. Now it emits about 5 kg. The facility processes about 200,000 metric tons of lead acid batteries per year. It has room under the regulations to emit about 5 metric tons per year.

RSR is partially motivated by its experiences in Dallas, Raycroft acknowledges. “I don’t think there is any fault in how the operations were run in the past,” he says. “As knowledge of the hazards associated with lead continued to grow, there were tighter standards and more scrutiny. But we don’t want to be in that position again.”

Aqua Metals, an Alameda, Calif.-based start-up, wants to forgo smelting altogether. The company has developed a recycling process in which lead-containing compounds are dissolved in organic acids and plated on an electrode as lead metal.

Stephen Clarke, Aqua Metals’ cofounder and CEO, admits the idea isn’t novel. Battery recyclers have attempted electroplating in the past. He says his engineers examined why these efforts failed in order to avoid the same pitfalls. For example, other lead recycling attempts were modeled on electroplating processes for metals like nickel and zinc, which weren’t optimal for lead.

Aqua Metals says its process promises less than 1 kg of lead emissions for every 30,000 metric tons of lead produced.

The company has captured an important backer in Johnson Controls, the world’s largest vehicle battery maker. Johnson Controls took a 5% stake in Aqua Metals last year and plans to retrofit one of its smelting-based recycling plants with the technology.

Aqua Metals aims to pilot the process this year with 16 of its electrolyzer units. Clarke wanted to do this sooner, but technical delays related to material handling set the company back by about six months. He hopes to install the equipment at Johnson Controls next year.

George Mayer, who runs the Battery Technology Center in Washington, Pa., is skeptical of the Aqua Metals process, pointing to throughput as a likely challenge. Electroplating is slow, he says, estimating that it would take hundreds of the electrolyzers to match a smelter’s production of about 20 metric tons per batch.

Mayer says the process of scraping lead off the electrodes is probably a hurdle as well and might explain the delay. “Typically, when you plate metals, you plate them on to be hard,” he says.

However, if Aqua Metals proves the technology, Clarke sees a niche for battery recyclers that want to increase production without increasing emissions. “They need a way to add capacity using something that isn’t a smelter,” he says. “And that is what we can offer.”

Should that happen, battery recyclers will keep up their high recycling rates and do a cleaner job of it at the same time. It would be another win for the industry and the circular economy.