A long way to go for a little sulfur 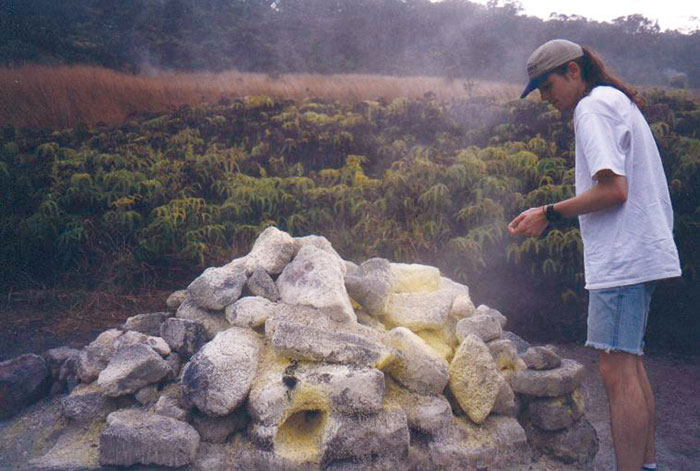 Credit: Courtesy of Bart Dietrich
Don’t trip: Bart Dietrich collects sulfur from a vent on an active volcano in 1998.

For a recent experiment, University of Glasgow’s Bart Dietrich used one reagent with a very unusual history. The sulfur he used to synthesize a terthiophene derivative, a compound used to develop components for molecular electronics, was sourced by Dietrich himself from an active volcano on the Hawaiian Islands.

Dietrich, a native of Europe, is not in the habit of traveling to distant locales to gather reagents for his experiments. He visited Hawaii in 1998 on a trip with his father to celebrate the completion of the younger Dietrich’s undergraduate degree, which was in jazz composition at Berklee College of Music in Boston.

As a child, Dietrich had started a small element collection, which he’d kept even as chemistry temporarily took a back seat to his musical aspirations. Thinking volcanic sulfur would make a nice addition to his collection, Dietrich scraped up a sample from near a vent where sulfur-containing volcanic gases escaped to the atmosphere.

Later, Dietrich began working toward an advanced degree in chemistry, which ultimately brought him to the University of Glasgow and the lab of David Adams, who asked him to synthesize the terthiophene derivative.

“I mentioned that I still had that vial of volcanic sulfur from 20 years back, and wouldn’t it be cool if we used that in the synthesis and wrote in the experimental section that the sulfur came straight from the bowels of the earth?” Dietrich tells Newscripts.

Dietrich purified the Hawaiian sulfur before use and tucked the detail of its provenance into the experimental section of the team’s paper, which was published in January (Macromol. Rapid Commun. 2018, DOI: 10.1002/marc.201700746).

But those looking to repeat the experiment need not procure their reagents from such singular sources. If there’s not a handy volcano nearby, “sulfur from a commercial supplier is anticipated to be an adequate substitute,” the paper notes. 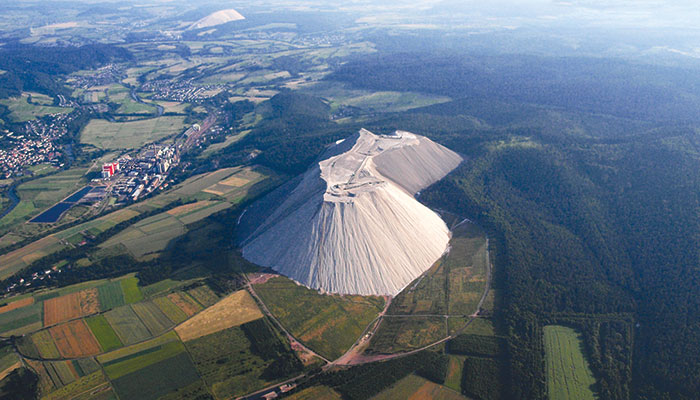 Credit: Wolkenkratzer/Wikimedia Commons
Pass the salt: An aerial view shows the scale of Germany’s Monte Kali, a massive heap of sodium chloride produced as a by-product of potash mining.

Now that Dietrich has scratched “active volcano” off his mineralogical tourism bucket list, Newscripts recommends a trip to Heringen, a small town in central Germany that is home to a gleaming white mountain made almost entirely of sodium chloride.

The striking landmark owes its existence to potash mining, a major industry in the area. After valuable potassium compounds are separated from potash ore for use as fertilizer, the leftover sodium chloride, unfit for sale, is piled up nearby.

Locals call the formation Monte Kali, after the mining company K+S Kali that started dumping salt there in the 1970s. Today, the heap contains roughly 209 million salty metric tons, according to a regional mining museum that organizes tours of the landmark. When the K+S conveyors are running, about 900 metric tons are added to the mound every hour.

All that salt isn’t great for the surrounding environment, and salt pollution from the region’s potash industry has affected wildlife populations in the nearby Werra River. K+S says it’s working to reduce the impact of potash mining, and one part of the solution may be to cover exposed salt to reduce saline runoff when it rains.

Monte Kali is not the only strange white mountain to be found dotting the landscape near potash mining operations, but it does seem to be the most well promoted. Travel blog Amusing Planet reported in 2015 that more than 10,000 visitors climb its salty slopes each year. The views from the top—more than 200 meters high—are said to be quite impressive.

Education
New international students cannot enter US for online-only programs
Education
Chemistry-style fun and games
Undergraduate Education
Block plan compresses one class into a few weeks for deeper learning
Share X
To send an e-mail to multiple recipients, separate e-mail addresses with a comma, semicolon, or both.
Title: Minerals from strange places
Author: Kerri Jansen
Chemical & Engineering News will not share your email address with any other person or company.