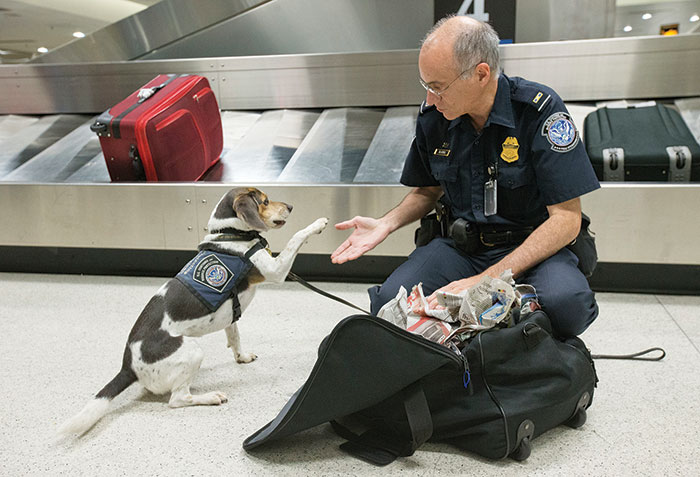 Credit: Associated Press
CBP agents use dogs to sniff out packages of opioids as well as suitcases with agricultural products (shown) at airports.

Illegal synthetic opioids such as fentanyl can easily be ordered online from Chinese labs and shipped through the mail to addresses in the U.S., Senate investigators say. A nearly yearlong inquiry by the Senate Permanent Subcommittee on Investigations found that sellers in China use the U.S. Postal Service because the risk of seizure by U.S. Customs & Border Protection (CBP) is small and delivery is “basically guaranteed,” according to a report by the subcommittee. The investigators discovered 500 financial transactions in which more than 300 U.S. customers in 43 states purchased fentanyl, mainly in powder form, with a street value of about $766 million. “Thanks to our bipartisan investigation, we now know the depth to which drug traffickers exploit our mail system to ship fentanyl and other synthetic drugs into the U.S.,” says Sen. Rob Portman (R-Ohio), the subcommittee chairman. The report criticized the Postal Service and CBP for failing to recognize and prepare for the rapid growth in inbound international mail. Volume has jumped from 150 million packages in 2013 to 498 million in 2017, overwhelming screeners.

Consumer Safety
Do we know enough about the safety of quat disinfectants?
Lab Safety
Adapting hijabs for lab safety
Industrial Safety
US Chemical Safety Board praises Airgas for its response to 2016 fatality
Share X
To send an e-mail to multiple recipients, separate e-mail addresses with a comma, semicolon, or both.
Title: Weak mail security make U.S. vulnerable to opioids
Author: Glenn Hess, special to C&EN
Chemical & Engineering News will not share your email address with any other person or company.