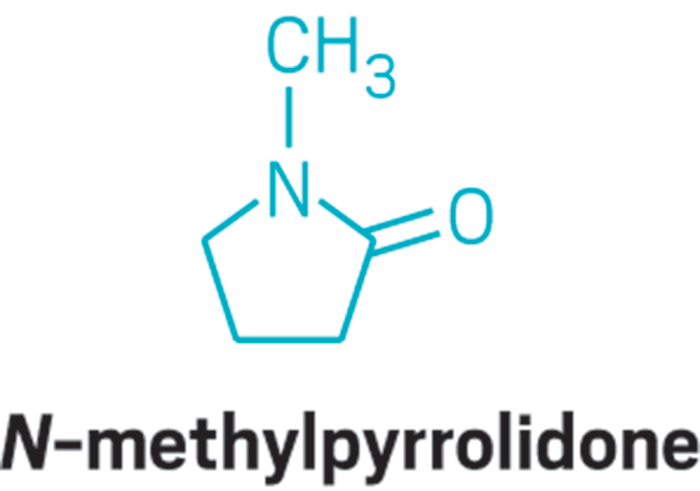 The solvent N-methylpyrrolidone (NMP) is among seven chemicals or groups of substances that the European Chemicals Agency (ECHA) is moving to regulate tightly. In addition to NMP, the European agency is targeting a group of karanal fragrances used in soaps and detergents, four ultraviolet stabilizers, and a plasticizer. If these substances aren’t strictly controlled, they could become “regrettable substitutes” for chemicals that are stringently regulated or are candidates for such regulation, ECHA says in its Feb. 5 announcement. NMP and the plasticizer are toxic for reproduction, while the other substances are very persistent and very bioaccumulative, ECHA says. If finalized, the action would allow companies to use the substances only if they get authorization from the agency. In contrast, the Trump administration in December delayed an Obama administration plan to ban use of NMP as a paint stripper, a move that could signal that the substance will remain unregulated in the U.S. The chemical industry wants EPA to reevaluate the substance and two other solvents targeted for control in the U.S. EPA has said use of NMP as a paint stripper puts people at risk for cancer and neurodevelopmental effects.

Chemical Regulation
Tetraglyme proposed as candidate for regulation in EU
Regulation
EU proposes to restrict some siloxanes, formaldehyde, and microplastics
Regulation
3 siloxanes, lead, and a phthalate are candidates for tight regulation in EU﻿
Share X
To send an e-mail to multiple recipients, separate e-mail addresses with a comma, semicolon, or both.
Title: European Chemicals Agency targets solvent N-methylpyrrolidone for strict regulation
Author: Cheryl Hogue
Chemical & Engineering News will not share your email address with any other person or company.